Often described as the "Bulldog" of the cat world, British Shorthair Cats are very laid back. They do occasionally have their mad moments, but these rarely last more than five minutes! Though they can be initially shy with strangers, they warm up quickly and are deeply devoted to their humans.

Whilst they are very inquisitive cats and will be interested in everything you do, typically they like nothing more than being curled up either on their owner's lap or beside their owner in front of a cozy fire watching the television! They are affectionate cats who will make sure you know that you're loved.

British Shorthairs are also known to get along quite well with other cats, and even the occasional family dog. As long as they are allowed plenty of time for relaxation, they can deal with almost anything. 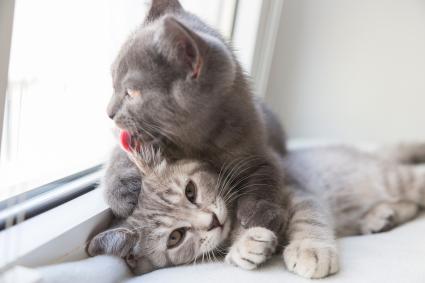 British Shorthair Cats are described as "cobby" which means stocky, thick and short. Cobby is the perfect word for them as their structure is short with strong legs, a big round head with well-rounded eyes, a thick neck, and a tail that is broad at the base and rounded at the tip. They are considered a medium-size cat and weight between 11 and 18 pounds.

The coat should be short and dense and feel like almost like a plush stuffed teddy bear. The coat will also become longer and heavier during the winter months, which leads to more shedding. The general impression should be that of a compact, alert, fit and healthy cat.

Although often referred to as the "British Blue", British Shorthair Cats come in a great range of color varieties, including:

Most colors are recognized by the main registering bodies. Their eyes come in several colors including blue, green, copper or gold. 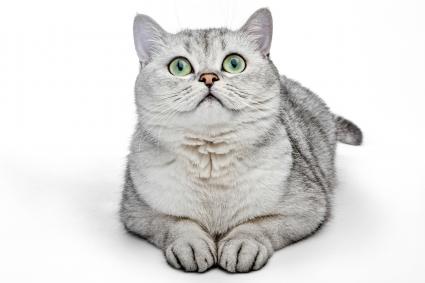 Minimal grooming is required to maintain the British Shorthair's short crisp coat. Normally all that is needed is a quick brush through the coat once a week.

However, potential owners should be aware that the extremely plush coat of this breed sheds considerably during the seasonal change. Extra brushing is beneficial at this time to remove as much loose hair as possible before it has a chance to collect on clothing and furniture.

Obesity can become a problem for these cats as middle age approaches. Their fondness of a good nap definitely doesn't help burn off excess calories, but this can be combatted by serving a well-balanced cat food in smaller daily portions.

Expect this feline companion to be long-term, since it is not unheard of for individuals to live up to twenty years. The average lifespan for a British Shorthair cat is about 12 to 17 years.

How Much Is a British Shorthair Cat?

Is a British Shorthair the Breed for You?

If you're looking for an affectionate, but not very needy feline, the British Shorthair might just fit the bill. The breed's ability to get along with other household pets is definitely a plus, but excessive shedding can be the trade-off.

Perhaps the best way to decide is to spend some time getting to know the pets of a reputable British Shorthair breeder. You can observe the natural behavior of these cats and find out if you have any rapport with their personalities.