Cat behavior can be entertaining, perplexing, and sometimes downright annoying, but one thing's for certain: they are always fascinating. When you take a closer look at each of a cat's typical behaviors, you'll find there's a very good reason behind why your pet does what he does.

Cats do a fairly good job communicating with humans and their fellow felines through a series of different meow sounds. Even so, longtime cat owners will tell you that these pets can be difficult to read sometimes. Luckily, you can take away some of the mystery by learning the motivations behind the most common body language and behaviors to understand what your cat is really trying to tell you.

Kneading perplexes many cat owners. Cats seem to be softening up a spot to lie down, yet they often don't lie down. Instead, they just continue working their paws as if kneading bread.

According to Pet MD, kneading is a behavior cats carry over from kittenhood. When kittens knead their mother's tummy while nursing, it stimulates the flow of milk, which brings the kittens comfort and satisfaction. That's not to say grown cats knead because they are hungry or looking for milk. In weaned cats, it's probably more of a comforting behavior that expresses their contentment.

Cats also have scent glands in their paws, so kneading provides a way for them to mark people, areas and items in order to stake a claim on them.

According to Doctors Foster and Smith, cats purr for three basic reasons:

Cats have scent glands in their faces, and they like to rub them on objects to mark them with their scent. According to VetStreet.com, this is a territory-claiming behavior, and cats will mark just about anything, including people, to claim them as their property.

Cats have a lot of motivation to scratch. According to the San Francisco SPCA, reasons include:

The Humane Society notes that a cat uses his tail to communicate how he's feeling at any given moment:

The Humane Society also notes that crouching is part of stalking behavior, and it usually means your cat is getting ready to pounce. In the wild, the cat would be preparing to pounce on prey, and domestic cats may well do this in the garden when hunting birds or small animals. It is also very normal to see cats do this in the house. They will get ready to pounce on their fellow cats, other pets in the home, or even a human leg if nothing else of interest presents itself. 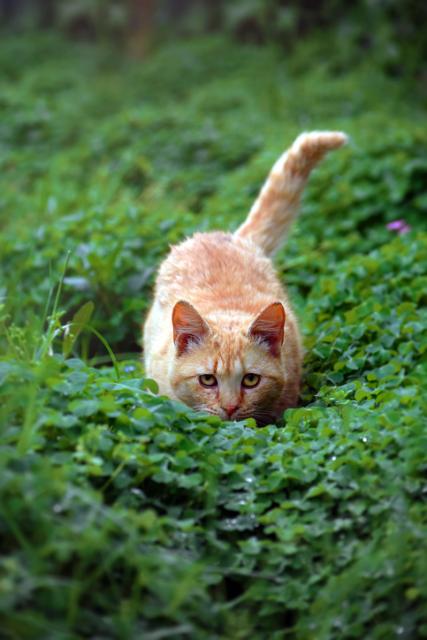 According to Animal Planet at Pet Assure, a cat will stretch out and expose his underside. This puts the cat in a very vulnerable position, so you know that he really feels truly safe and secure when he lies like that.

In a different situation, rolling onto his back may indicate that your cat feels threatened. Cats sometimes roll onto their sides when fighting because this position frees up all four of their paws for scratching. If your cat's holding his paws out with claws extended, he's ready to scratch anyone who comes near him.

In yet another situation, one cat may give in to another cat and lay down in order to signal that he submits and doesn't want to fight or play anymore. 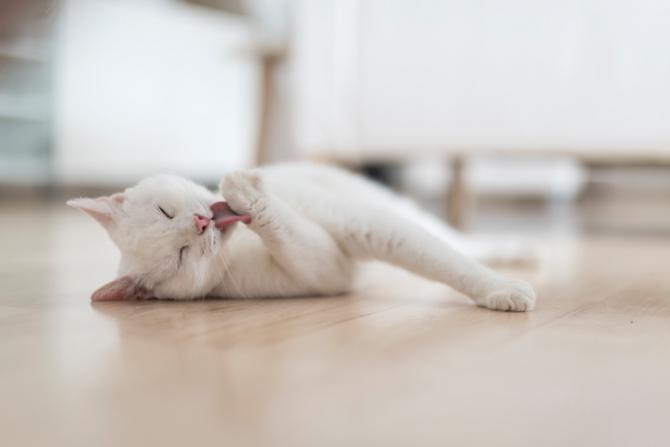 In addition to purring and meows, cats make many types of vocalizations to express behavior. According to Healthy Pets, common cat vocalizations include:

Every cat is different regarding their regular vocalizations. Some breeds, such as Siamese, are known to be more "talkative" than others. If your notice a sudden change in your cat's frequency or intensity of vocalization, this may indicate a medical or behavioral problem and a trip to the veterinarian is warranted.

Sharing Life With Your Cat

Now you know the motivation behind many common feline behaviors. There are likely other peculiarities you'd still like to understand about your furry friend, but you probably never will. That's just part of the adventure of sharing your life with a cat. Accept it and enjoy!