Sometimes a male or female cat will refuse to mate. This can cause problems, especially if the underlying cause is a medical issue that requires treatment. Unfortunately, no matter how much you want a pair of cats to mate, if either refuses you cannot make them mate, but you can become a better breeder by understanding why this is happening.

In some cases the female cat will refuse to allow a male to mate with her. If the male attempts to get close to her, she will fight him fiercely until he goes away. There are a few reasons this can happen.

If the female is new to the process, she may be anxious and stressed by having the male come near her. This can be exacerbated if other factors in the environment increase the stress, such as being taken to mate some place other than her familiar home, disruptive noises or scents, or too much activity and people in the area. You can help the female by:

Not Ready for Mating

Some females may also simply not be ready to mate, even if they go into heat. This can happen with a female brand new to going into heat and mating, or with experienced females. According to small animal veterinarian Sara Ochoa, DVM, it's possible that, "the cat does not like the male cat. Cats can be very picky, and, if they do not like their mate, they will not allow them to breed with them." It's also possible she may not be feeling well that day, either for temporary reasons such as an upset stomach, or from an underlying medical condition. Never force the cat to mate in these situations and seek out your veterinarian if you suspect she might be ill.

Says Dr. Ochoa, "If a cat is not in heat, they will refuse to mate." Some cats may seem like they are in heat but are not. If you're new to dealing with breeding cats, consult with your veterinarian as it's possible you've misread the signs and your cat is not yet in heat.

Another reason a female may refuse mate is if she's pregnant. A cat that is already pregnant "will refuse the male cat." If you suspect she may be pregnant have her checked out with your veterinarian to be sure.

A male cat, or tom, may not be willing to mate with a female in heat because he has not mated before and may be intimidated or stressed by approaching the female. Pairing him with a more experienced female may increase the chances that a successful mating will occur.

Certain breeds of cats take longer to reach maturity than others. In these cases, a tom may seem young enough to breed compared to the "average" cat but may not be physically and socially ready. An example of breeds that take longer to mature include the American Shorthair, Manx, Persian and Ragdoll. 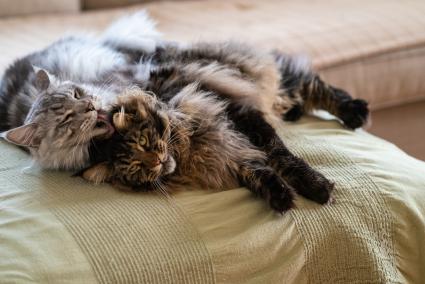 If you took in your cat as an adult and are not sure if he is fixed or not, look to see if he has visible testicles in his groin area. If he does not, he most likely is neutered. Your veterinarian can check him for you and tell you if he's been sterilized or not.

No Interest in the Female

Just as female cats can dislike a male for their own reasons, a male cat can be uninterested in a particular female. A male cat may also have no interest in a female that he has a previous bad relationship with, such as female in the household who bullies him or has initiated fights with him prior to going into heat.

A male cat, like a human male, can have issues with a lack of testosterone which can have a negative effect on their desire to mate. Other medical conditions that might deter him from wanting to mate could be physical injuries, dental disease or severe obesity. If you suspect your male cat has an underlying medical problem, have him checked out by your veterinarian right away.

In the cold months of winter some males are totally uninterested in breeding, even with an available female in heat. There is some belief that keeping a natural UV light on where the cats spend most of their time will encourage him to breed.

It is true that lights have been used to induce heat in the females as felines are polyestrous. Polyestrous means that they tend to come into heat during certain seasons of the year. This is why you see many baby animals in the spring, for example.

There are different phases in the cat's cycle and in the winter, when the days are typically shorter, the cats will be in the anestrus phase. The males will not be interested in mating during this time. The artificial lights can fool the cat's body into thinking it is a different season. It is typically recommended that you create either 12 hours of light and 12 hours of dark or 14 hours of light and 10 hours of dark, whichever works best for your cats. Keep in mind this may not work with every cat!

Understanding Why Cats Do Not Breed

Experienced breeders will know that male and female cats can refuse to breed for a variety of breeds. These can include lack of experience, immaturity, medical problems and simply not liking the other cat. If you're new to breeding, it's best to work with an experienced breeder who can mentor you on best practices to keep your cats and their offspring healthy and happy.