When you see your normally healthy cat throwing up, it is a cause for concern. A cat may throw up for any number of reasons, some of which are to be expected and others that may require a trip to the vet. The key to knowing how to care for an animal that has just thrown up is to understand what is normal and what isn't.

One of the most frightening sights for a cat owner is the appearance of blood in the pet's vomit.

The cat will vomit almost constantly, and the liquid is clear and frothy.

It's not unusual for a cat to vomit every once in a while over a period of days or weeks.

A cat that is vomiting feces most often has suffered a serious internal injury or has feline infectious peritonitis.

A cat that is vomiting worms has internal parasites such as roundworms. This is often observed in kittens.

Other Reasons for Cats Throwing Up

If your cat has been throwing up hairballs and grass, there is little cause for alarm. A cat will eat grass to help him throw up hair that has accumulated in his stomach from grooming since it isn't easily digested. It is usually easy to discern this type of vomit, since the green grass the cat has eaten is visible.

There are several types of inflammatory bowel disease (IBD) that can lead to a cat vomiting, including:

If your cat vomits often, is losing weight, has chronic diarrhea and bloody stools, lethargy, and a lack of appetite, this is a strong indication they are suffering from a form of IBD. A veterinary examination can lead to treatment which includes dietary change, prebiotic supplements, and medications such as metronidazole and corticosteroids.

A bacterial infection of the uterus can happen shortly after a cat gives birth to kittens. If your new mother cat is vomiting along with symptoms such as dehydration, fever, dark red-colored gums, poor appetite, and a foul-smelling discharge from her vulva, she needs veterinary treatment right away. If not treated, the infection can not only cause her to be sterile but can also lead to sepsis and death.

Vomiting is one of the symptoms of this pernicious disease that unfortunately has no cure and is fatal. FIP requires an examination by a veterinarian to make a diagnosis as it can match the symptoms of several other diseases. Your veterinarian will prescribe supportive care and medications to help your cat feel better but a cat's prognosis with FIP will lead ultimately to euthanasia.

Both liver and kidney disease in cat include vomiting has one of the significant symptoms. This type of vomiting can include blood if the cat has tumors in either organ. Thankfully in liver disease your veterinarian has a good chance of removing the tumors through surgery. With kidney disease, the prognosis is less certain and some cats can regain full kidney function if the disease is related to a temporary obstruction or a bacterial infection.

In cases of chronic renal failure due to kidney disease, your cat will vomit due to nausea brought on by the malfunctioning kidneys. Your veterinarian may be able to prescribe anti-nausea and antacid medication to help your cat feel better during the end stages of this disease which ultimately will mean euthanasia. Oral and IV fluids are also given to prevent dehydration and steroids and vitamin injections can help stimulate their appetite.

About 44% of cats who suffer from hyperthyroidism will experience persistent vomiting along with diarrhea. This will also be accompanied by weight loss, a dull coat, hair loss, and excessive drinking and urination. Although this condition usually occurs in older cats, cats as young as two years old can have it and all ages of cats will need to see a veterinarian to treat this condition. Your veterinarian may prescribe radioactive iodine therapy, surgery, or the antithyroid medication methimazole.

Ingestion of Toxic Plants or Other Substances

Vomiting a clear liquid or a white foamy substance are a common sign of poisoning among cats. Since you can also see this type of vomit for things as simple as hairballs, it's important to look for other symptoms. If you know your cat has eaten something they shouldn't, or if you observe them appearing disoriented, drooling, refusing to eat, lethargic, or drinking excessively, and their gums appear pale or a yellow-tinged color, get them to a veterinarian ASAP.

Also known as cat distemper, feline panleukopenia has no cure, and about 90% of cats who get it will die if they do not get treatment. One of the signs of distemper is vomiting, which is usually a clear liquid and is often mistaken for less serious conditions. If you see this type of vomiting in conjunction with other symptoms such as severe diarrhea, dehydration, a dull coat, jaundice around their ears, and the appearance of a third eyelid, seek veterinary treatment right away. If caught in time, your veterinarian can prescribe antibiotics, anti-nausea medication, and supportive care to help your cat beat this serious infection.

Care for a Vomiting Cat

If you have a sick cat that needs expert care, keep him limited to one room so that you can observe him. 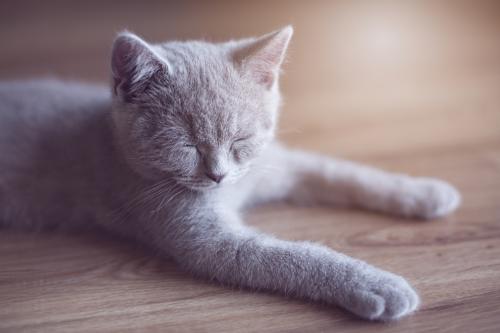 While vomiting here and there is perfectly normal for cat know the signs and symptoms of when it indicates a much more serious condition. If you see your cat vomiting in conjunction with any other symptoms discussed here, do not delay in seeking medical attention. It is always better to err on the side of caution than to wait until a condition has reached an emergency stage. A quick phone call to the vet may be all that it takes to save the life of your pet.

4
Comments
© 2006-2021 LoveToKnow, Corp., except where otherwise noted. All Rights Reserved.
Resources, Advice & Tips for Covid-19
Read More
Why Is My Cat Throwing Up?