If your kitty goes wild for catnip, you might think it's making her high or a little crazy! Catnip is actually perfectly safe for cats and can be a great way to give your cat some intoxicated fun and enrichment.

Catnip is a plant, also known as Nepeta cataria, and a member of the mint family. The plant is known to grow wild in Africa, Asia, Europe and North America and can be identified by its heart-shaped leaves, stems with fine green hairs and white and purple flowers. The stems and leaves of the catnip plant contain nepetalactone, which is the ingredient that makes cats react so strongly to it.

What Does Catnip Do to Cats?

When a cat sniffs some catnip, you will see them act with some odd, animated behaviors including:

These behaviors can last from about 10 to 30 minutes before your cat returns to normal.

Why Does Catnip Affect Cats?

When a cat's vomeronasal gland in their nose comes into contact with the nepetalactone in catnip, it causes a reaction in the olfactory bulb's neurons. This causes the cat's amygdala and hypothalamus, two regions of the brain, to respond with "sexual" behaviors. In effect, the nepetalactone is acting as a pheromone to the cat who responds with behaviors you would normally see with a female cat in heat. On the other hand, if your cat eats catnip, they'll have a much more sedate response and you may notice them become sleepy and lethargic.

Cats have been described as looking "high" when engaging in catnip-related behaviors. The behaviors that catnip produces do appear to provide them with a feeling of euphoria. It can be similar to the "high" that humans feel with certain drugs, but it is not addicting and doesn't lead to any long-term bad side effects for the cat. Catnip can also help a cat who is feeling anxious and stressed to relax and assist shyer cats in feeling more confident engaging with people. It's also been demonstrated to have some possible positive antispasmodic properties for cats with gastrointestinal issues.

Does Catnip Affect All Cats?

The crazy response to catnip is actually a genetically inherited trait that can be found in about 70 to 80% of cats. For cats who don't have the trait, they will simply ignore the catnip and show no noticeable responses. However, a study published in 2017 in journal Behavioural Processes found that almost 100% of cats responded to catnip in one study, although not all of them engaged with the typical "heat" behaviors. Instead, they became quiet and adopted a "sphinx-like posture" when presented with catnip. Catnip also doesn't appear to have any effect on kittens under the age of six months, even if they have inherited the catnip gene, which may be due to the fact they are not yet sexually mature.

Is Catnip Safe for Cats?

Catnip is perfectly safe to use with your cat, although you do want to use it in moderation. A cat that's overexcited could hurt himself or get out of breath if he's overweight. If you give catnip to your cat to eat, only give a tiny portion at a time as too much of it can cause vomiting, diarrhea and other gastrointestinal upset. Finally, if you have more than one cat, it's best to give catnip to each cat individually and monitor them for any aggressive responses. Sometimes it can make cats hostile to each other, so it's better to give multiple cats their own private nip sessions.

There are many ways that you can use catnip to give your cat some fun. 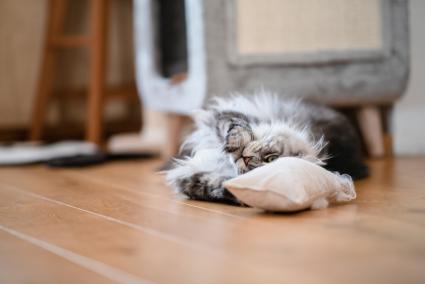 Many manufacturers will stuff some catnip inside soft toys to make them attractive to cats. A cat chewing on its catnip toy is a happy cat indeed. Toys thus treated often have a very short play-life, and you may have to replace them often. Look for toys that have zippers and other openings that allow you to stuff fresh new catnip in and remove the stuff that your kitty may have drooled on.

You can buy loose catnip and crumble some on the ground for your cats to enjoy. They will roll in it, lick it off their coats, mush their faces in it and act like drunken fools. The buzz only lasts for a short time, and then they become saturated and indifferent to the herb for a while until their sensors reset and they can enjoy it again.

Make Your Own Catnip Toys

Stuff the end of an old sock with some catnip and either tie it off with a knot or sew it shut. This can become a kind of comfort-toy for your pet, and he may carry it with him from place to place and sleep with his head on it like a pillow.

Getting your cat to use a scratching post is an excellent way of providing a healthy method for keeping their claws trimmed while saving your furniture. Some cats may not understand the purpose of a scratching post right away, so sprinkling catnip on it can help entice cats to rub up against the post and claw it.

Use Catnip in Treats

Catnip is safe for cats to eat, and it can provide cats with a calming sensation. You can sprinkle some catnip into homemade cat treats. Your kitty will devour the treats and then curl up for a nice, relaxing nap.

Catnip can be an excellent motivator for a fat cat who needs to get some exercise. If they're sensitive to catnip, provide some for your obese cat and watch him get up and move around with joy. You can pair it with some cat toys to get a lazier cat in the mood to play and break out some cardio moves.

Catnip can be useful for cats that are anxious or stressed, especially around specific events. If you have a cat that doesn't want to go in to a carrier to go to the vet, sprinkle some catnip in the carrier and build up a positive association with the carrier. It can also entice some cats that are nervous to come out and play. It's also good for relieving general boredom, which can lead to stress if left unaddressed.

Grow Your Own Catnip

Grow catnip and harvest the tops of the plant when it is flowering and tie them in bundles to dry hanging head-down. Make sure the bundles are hung well out of reach of your cat; some cats will scale any heights to get to it. This means make sure there are no handy items of furniture that the cat can use as a launching pad. Store the dried herbs in a plastic tub with a tightly fitting lid as a sealed plastic bag doesn't provide enough protection for the catnip-hungry cat. Even in a tub, you may have to keep it in the refrigerator to keep cats from trying to bat the container open.

Don't be concerned if your kitty becomes a bit crazy when presented with catnip. Cats enjoy the "high" they get from the herb and it's a good source of play, enrichment and stress-relief for cats. It's safe for them to eat as well and provides a calming effect. Catnip can be useful in many ways, from stimulating exercise and play to alleviating boredom and stress.

0
Comments
© 2006-2020 LoveToKnow, Corp., except where otherwise noted. All Rights Reserved.
What Does Catnip Do to Cats? Effects, Use, and Safety