According to the Cats Protection League, in just five years, one female cat can be responsible for around 20,000 descendants, adding dramatically to the number of cats and kittens looking for homes. It's up to responsible guardians to stop cats mating by having them desexed or taking other preventative steps.

Prevent Cat Mating Prior to Desexing

Desexing is the best way of preventing cats from mating. However, with a knowledge of basic biology and a commitment to quarantining cats, you do have other options. If you fell for two kittens of the opposite sex, then plan for early neutering and watch them closely for warning signs of sexual behavior.

DVM360 shares interesting facts about the feline's reproductive cycle and mating. For example, did you know that the age a kitten first comes into heat is influenced by the length of daytime? A young female cat needs around 12 hours of daylight in order to trigger her reproductive cycle. In the wild, this means cats don't become pregnant in the winter. However, house cats live in artificial lighting and this effect is lost, so they can get pregnant at any time during the year.

For summer kittens, you can try limiting their exposure to artificial light in the autumn and winter. This is to mimic the shortening days outside, which naturally delays the female's estrus cycle. Instead of coming into heat in the autumn, you may postpone things to the following spring. Be aware though, given that the kittens are well fed and warm, the influence of light is reduced and this option isn't foolproof.

One option to save yourself a headache is opting for same-gender kittens. Two boys or two girls from the same litter stand no chance of procreating.

VetInfo explains that apart from neutering, quarantine is the most effective way of preventing mating from occurring. But be warned, keeping an entire male cat under house arrest can lead to spraying and marking behaviors, so desexing really is best. Referring to male cats, DVM360 writes that:

The implication is once a tomcat is older than six months, you should assume he's capable of inseminating a female cat (even his sister), and take appropriate preventative steps.

Quarantine Female Cats While in Heat

Female cats can only fall pregnant when they ovulate, which happens when they are in heat. By recognizing when your female cat is in estrus, you can then isolate her away from male cats and prevent pregnancy. If you have a male and female in the same house, confine the in-heat female to one room. This will limit how far she spreads those irresistible hormones plus it adds an extra layer of security from marauding tomcats.

Basic facts about a female cat's ability to reproduce are:

Be alert for signs of estrus in the female. Pet Informed list these as including:

When you see these signs, which will occur for approximately six days every three weeks, then separate the male and female. Keep the girl in a separate room with her food, water, bed and litter tray. Do not allow the male access.

Female cats in heat are 'induced ovulators.' This means mating triggers an in-heat cat to release eggs, therefore increasing the chances of pregnancy. However, in an interesting twist, a female that is stimulated to ovulate but doesn't fall pregnant may take longer to come back into heat.

VetInfo records how breeders sometimes keep a vasectomized tomcat in order to induce female cats to ovulate without falling pregnant. These toms are capable of mating, but fire blanks. The act of copulation triggers the female to release eggs which don't become fertilized. The added bonus is that females induced in this way may take longer to come back into heat, giving everyone a brief reprieve from this roller-coaster ride. 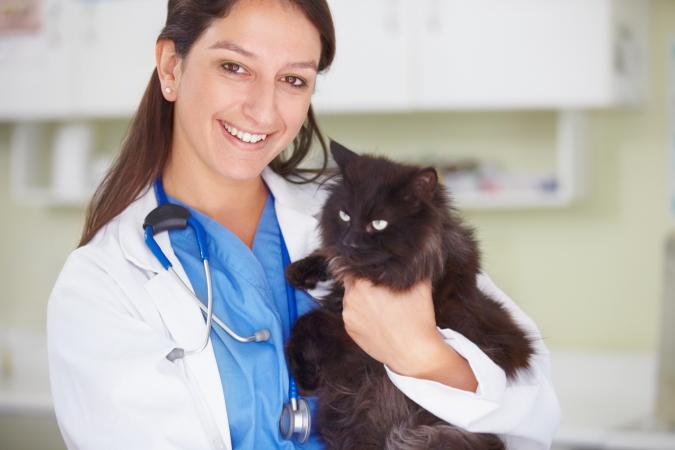 Your vet can give an injection of Depo-Provera. However, this injection contains the same hormone asOvaban (see below). There is a slight risk of similar side effects, such as mammary gland enlargement or cancer, womb infections, or diabetes.

An alternative hormonal injection that postpones heat in the female is Delvosterone. This contains a different hormone derived from progestogens and is associated with fewer side effects. A single injection can prevent estrus for an average of five months. However, the results are variable and ongoing vigilance for heat is advisable.

For non-breeding cats, the best option is surgical spaying and neutering. Removing the ovaries and womb in the female, and the testes in the male, mean natural mating behavior slowly abates with the added benefit that females can't fall pregnant. Desexing can be undertaken from as young as 10 to 12 weeks, with most vets advising surgery from around five months of age.

What Not to Do

There are some practices in which you shouldn't engage for the health of your pet.

The Feral Friends Foundation discuss the use of a medication called Ovaban. This is a hormone tablet which stops cats coming into heat. Ovaban does have a place in reducing the fertility of breeding barn cats but avoid the temptation to use it in pet cats. In some cats it can have severe side effects, such as inducing diabetes mellitus, causing huge mammary development or even mammary cancer, therefore, it is not worth taking the risk.

You will also read on the internet about using Q-tips internally in the female to mimic mating and therefore induce ovulation. Don't go there! If the female moves at the wrong moment or the Q-tip passes too deeply, the result could be serious internal damage. If you are tempted by this method, then contact your local vet to see if they are prepared to undertake this in a safe manner.

Options such as Rescue Remedy or other herbal supplements are not effective. As Diamond Back Drugs explains, these are largely calming and at best make a female cat in heat less vocal. However, they have no impact on her fertility, meaning a quieter cat lulls you into a false sense of security... then she gets pregnant.

Basic Biology: Could My Kitten Get Pregnant?

There are many misconceptions about cats and their mating instincts. For example, some people assume a brother and sister won't mate, whereas in reality, they will. Also, indoor cats with their access to warmth, light, and food are often able to breed all year round. This is in contrast to the feral female with harsh winters and lack of food, restricting her breeding activity to the better months.

What does this mean for that male and female house cat pairing?

The worse case scenario is a female housecat that could potentially fall pregnant at just four months old, by a male cat aged eight months or older. However, the male could attempt mating from just six months, and you need to bear in mind nature usually finds a way. Therefore, any pair of entire cats over the age of five to six months could be at risk of pregnancy.

Whatever you decide, keep the cat's welfare at the front of your mind. Know that pregnancy carries risks to the female and male cats are more prone to fighting and FIV (feline immunodeficiency virus) infections. Medical control of mating through the use of hormones is not risk-free and there can be side effects.

In contrast, surgery is an outpatient procedure from which your fur friend will recover quickly. Remember, cats don't think in the same way as people, and they will not miss the loss of their reproductive organs, instead they will become happy, contented pets.