The fascinating Egyptian Mau is truly a living relic! The feline that once graced the royal courts of the pharaohs and silently stalked mice in palace corridors, truly captures the mystery and elegance for which cats are so loved. With its engaging personality, splendid looks, and above average intelligence, the Egyptian Mau is one of the most exquisite of cat breeds.

History of the Egyptian Mau

The Egyptian Mau was developed in the United States in 1953, from cats imported from Cairo, Egypt by exiled Russian princess, Nathalie Troubetskoy. Not surprising is the Egyptian Mau's remarkable resemblance to the cats featured in Ancient Egyptian wall paintings. Most experts agree the Egyptian Mau is indeed the cat domesticated from a spotted subspecies of the African Wild Cat by the Ancient Egyptians. In fact, mau means cat in the Egyptian language. The Egyptian Mau played a key role in the religion, mythology, and everyday life of the Egyptian who held cats in high esteem. They were worshipped as deities, cherished as pets, protected by laws, and mummified and mourned upon their death.

Description of this Cat 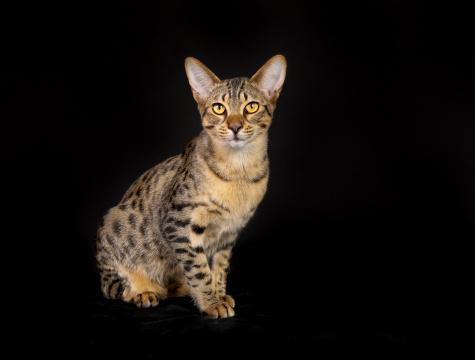 The Egyptian Mau is the only natural domesticated breed of spotted cat. Siamese in type, the Egyptian Mau is a graceful, long, lithe cat with a wedge-shaped head, medium to large erect ears, and striking light green (the color of gooseberries) almond-shaped eyes. Ranging from 7 to 11 pounds, its small dainty feet have five toes on the front and four on the back. The Egyptian Mau's hind legs are proportionately longer than the front and males tend to be larger than females. The following breed characteristics identify this beautiful feline:

The Mau pattern is common to all colors and features distinct random spots over the torso with variance in size and shape. Ranging from small to large, the spots are seen in round, oblong, or irregular shapes and are a deeper shade than the ground coat. As these elongated spots reach the rear haunches they blend to form a dorsal stripe which continues along the top of the tail to its tip. The tail is heavily banded and has a dark tip. The upper front legs are heavily barred but do not necessarily match one another. The underside is marked with deeply colored vest buttons or buttons which stand out against the lighter coat. On the face, the cheeks are barred with mascara lines. The forehead is barred with a characteristic M and frown marks forming lines between the ears, which continue down the back of the neck with elongated spots along the spine. Interestingly, the British bred Mau have a mark on their foreheads reminiscent of the scarab beetle. This distinctive mark is seen in cat statuettes made at the time of the pharaohs and now on display in the Louvre in Paris, the British Museum in London, and other museums throughout the world.

When choosing a cat breed, finding one that is a perfect fit for your lifestyle is a key consideration. The Egyptian breed of Mau is much more than living art and suitable for those feline lovers who appreciate having a moderately active companion that is well balanced both physically and temperamentally. The following breeder's websites offer photo galleries and links of interest to those of you considering sharing your life with a fabulous Egyptian Mau: