Male cats can have some unpleasant behaviors like urine spraying and responding to females in heat. This tends to happen only with un-neutered males and fixing them can help with these behaviors.

When you examine both genders closely, there really isn't a great deal of difference between the way the sexes behave, especially in neutered cats. However, an entire tomcat has strong natural urges to protect his territory and find a mate, which can result in behaviors considered anti-social by some.

Probably the worst offense attributed to male cats is the habit of urine spraying. Males spray their territory as a warning of the boundaries to other cats. Toms also spray as an advertisement of their sexual prowess when seeking females to mate with. An anxious cat may also spray to comfort himself by spreading his own scent. 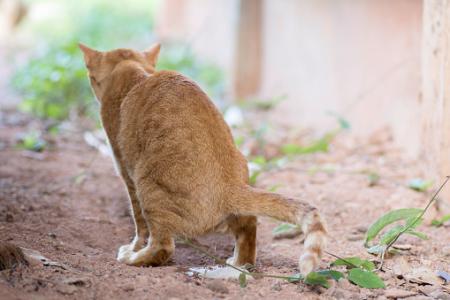 That said, urine spraying is not always behavioral by nature. A case of kidney stones can drive a cat to spray in an effort to pass the blockage and gain a little relief. Likewise, a urinary tract infection can also lead to disturbing urinary behaviors.

If your cat is spraying, get him checked out by a vet to rule out medical problems and clean up after him with a product like NOse Offense to help remove his scent. Neutering may also help if the spraying is related to mating behaviors. Some owners also find pheromone diffusers and sprays like Feliway can help reduce spraying.

Of course, one of the most infamous behaviors toms are known for is their propensity for wandering. This wanderlust can sometimes lead them miles from home, and you may not see your pet again for days. More often than not, your tom will nonchalantly return home looking for his dinner, but that doesn't keep you from worrying in the meantime. Factors that drive this behavior include:

Although opinions will vary, it's safest to keep your pet indoors only and eliminate their ability to wander. Male cats that roam can get into fights with other animals, be run over by cars, stolen, or contract deadly diseases. They also can contribute to pet overpopulation if they're not neutered and encounter females.

Fighting is not strictly a male behavior, but males do seem to receive the most attention for getting into scrapes with other toms they encounter. This is mainly due to a desire to defend or gain territory, but breeding behavior also drives males to spar with each other. Sometimes these fights are more about posturing, but on many occasions, these boys will do some significant damage to each other. Keep your cat at home is the best way to eliminate fighting with other cats. 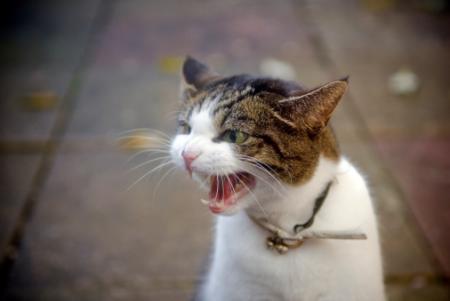 Males Have Stronger Urges for Scratching and Clawing

In the wild, cats scratch trees and fence posts as another way of alerting other cats to their presence. This advertisement is in part down to the physical damage, which is a visual marker, and scent spread from glands in the pads. Because male cats are more territorial, they also experience a stronger urge to rake furniture, walls, or carpets. This is a normal behavior in an inappropriate place, which is little comfort to a frustrated pet parent.

Be sure to provide a male cat with plenty of sturdy scratching posts, preferably mounted near entrances and exits. This helps satisfy his need to claw and scratch.

Coat care and grooming are as important to male cats as to females. Males spend time licking and cleaning which helps keep their coat in good order and reduces parasitic burdens. In addition, coating hair in saliva is an important way of losing heat in hot weather. 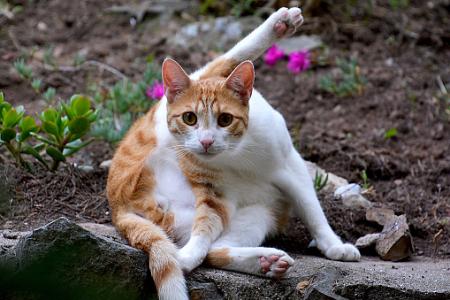 However, when it comes to grooming cats other than themselves, males are more standoffish than females. Males do not usually consider mutually grooming another male and are more likely to wash the head and shoulders of a favored female cat.

Caterwauling Is a Common Behavior in Male Cats

If you've ever been kept awake at night by the sounds of yowling cats, the chances you were listening to caterwauling. These loud, harsh cries are male cats advertising that they are available to mate. This courtship behavior serves a dual function of attracting female cats in heat, while warning off other male suitors.

How do cats mate? There is nothing subtle about the courtship of a male cat to a female. When near a female in heat, experienced males may run straight to the female and mount her in as little at 16 seconds. Less experienced males are more cautious and may make a softer mating cry to her and sniff around her rear end. If she accepts his advances, the male is apt to mount her and grip her neck with his teeth, in what's thought to be a naturally pacifying action similar to a mother cat carrying her kittens. Mating takes on average one to nine minutes. Once mating is complete, the male wanders off and has nothing else to do with the female.

Feral cats spend around 25 percent of their day hunting for food, with an average daily kill being four mice. Male cats tend to eat more than females, however, they spend less time hunting. In part, this is down to females providing food for their kittens. 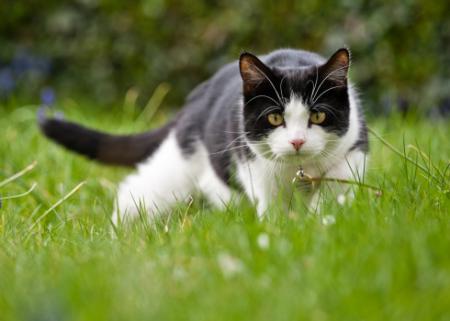 Hunting provides important mental stimulation for a cat. A useful tip for pet owners is to use puzzle feeders, which make the cat work for their supper. This can reduce boredom and therefore unwanted behaviors that a male cat might adopt, such as spraying or clawing.

While female cat lovers may argue this point, there does seem to be a widespread belief that males are more affectionate than females. A survey of veterinarians who specialize in felines ranked males as friendlier. However, individual personalities between male and female cats will vary and there's no real scientific proof that males are more affectionate than females. Neutering a male cat can make them seem more affectionate in that their desire to wander will decrease and they may pay attention to you more now that they're less distracted by charming the fairer sex to mate.

Tomcats are prepared to fight to defend their territory, but this is usually the option of last resort. This is because fighting risks injury, and an injured cat can't hunt and feed himself. The answer is a complex language of body postures, which signals the cat's intentions in the ultimate game of call my bluff. The first tool in the tomcat's artillery is scent, hence all that spraying and scratching to claim ownership.

When an interloper ignores these signals, a tomcat will put on a visual display of prowess, in order to intimidate and make the stray think twice about proceeding. The ASPCA explains what aggressive body language looks like:

Never attempt to intervene physically with a tomcat in this highly aroused state. He is likely to attack. If it's essential to distract the cat to keep injuries from occurring, then throwing a bowl of water over him usually diffuses the immediate situation (but does little to endear you to him). You can also try banging pots together to make a loud noise to startle the cats out of trying to fight with each other.

Cats are hunters and this behavior is almost impossible to eliminate. Young kittens can draw a tom's interest, and that initial curiosity often brings hunting instincts to the surface. After a few moments, that squirming little kitten begins to look remarkably similar to other prey animals like mice and chipmunks. Keep in mind that this does not describe all male cats and some can tolerate kittens and may even bond with them and assist the mother cat with raising them.

While male cats can form good relationship with kittens, a male cat can try to kill or drive off kittens that belong to another tom. Even if he tolerates his own kittens, it is usually limited to the next time the queen comes into heat. At this point, the tom wants those kittens out of the way so he can breed the female again. Always separate a female cat and her young kittens from the male whenever possible to prevent undesirable outcomes, even if the male has not shown any aggressive behavior toward the kittens. Likewise keep the male away from the kittens while they are growing if the male is neutered, as desexing the cat does not mean he will not act on instinctual behaviors and attack the kittens.

Not all males will attack kittens but research has found that males are definitely less responsive to kittens in distress than females. Kittens that are anxious and call out urgently to their parents will get a quick response from their mother, whereas males may respond but will not step up the speed of their response based on the arousal of the kittens. This may be due to the fact males generally do not assist with raising kittens and hence do not have an instinctual response to care for them in the way the mother does.

Typical behavior in the entire cat is driven by high testosterone levels. Neutering a male cat reduces his testosterone without taking away his character. As a pet parent, this means you can expect a general improvement in most behaviors. However, and it's a big BUT, this also depends on how much his actions are down to ingrained habit. For example, a male kitten neutered at six months of age has not learned bad habits such as spraying. However, a mature tomcat used to territory marking by spraying may do so out of habit and late neutering may have a disappointing effect.

As VCA Hospitals explains, neutered male cats are better behaved than their entire cousins, and their character is down to individual personality, genetics, and socialization rather than hormones. The behaviors described below are typical of an entire adult male cat.

When do Male Cats Go Into Heat?

Male cats do not go into heat - this is a female cat characteristic. However, male cats reach sexual maturity at about six months and if un-neutered, they will respond to females in heat. Desexed males are less likely to respond.

There are exceptions to every rule, and some males actually make quite carefree pets, but some of their actions have earned male cats a bit of a bad rap in the pet department. Take a closer look at a few of the most problematic behaviors you're likely to encounter with this gender before adopting and decide whether this is something you can tolerate. Otherwise, consider neutering your pet to help curb some of these behaviors.