As more breeders become aware of the special problems facing this unique breed, Manx cat health problems resulting from their genetic mutation continue to decline. Learn about Manx Syndrome and how to avoid this in your kitten.

Health Problems in the Manx Cat

The intelligent, curious, lovable Manx cat faces special health concerns due to the genetic mutation that causes many kittens to be born with small stubby tails, or, in some cases, without any tail at all. The health problems that may occur are a result of a shortened spine caused by the dominant mutant gene; this is referred to as Manx Syndrome.

Although the number of Manx syndrome cases is diminishing as breeders become more knowledgeable, it occurs most often when a tailless Manx cat, known as a rumpy, is bred to another rumpy. Most breeders today breed using Manx cats with tails to reduce the risk of Manx Syndrome occurring. A common Manx cat breeding combination is to breed a fully tailed or a stumpy cat to a dimple rumpy or rumpy riser. This significantly reduces the chance of kittens being born with this serious health condition.

When you picture a Manx cat, you generally think of an adorable cat without a tail. Although this is the distinguishing breed characteristic, many Manx cats do have tails of various lengths. The following are the names used to describe the different types of tails and their lengths:

Manx Syndrome is a condition that can cause serious damage to the nerves, spinal cord and spine of a Manx kitten. The following are health conditions that can result:

Due to the debilitating, life threatening and often fatal conditions of Manx Syndrome, responsible Manx cat breeders do not allow kittens to leave their cattery before they are at least four months old. Although Manx Syndrome generally becomes evident within the first month of a kitten's life, there are times when it appears later. By the time a kitten is four months old, the breeder knows for sure if there are any symptoms of the devastating condition. The extra time with the breeder also allows the kittens to become better socialized. 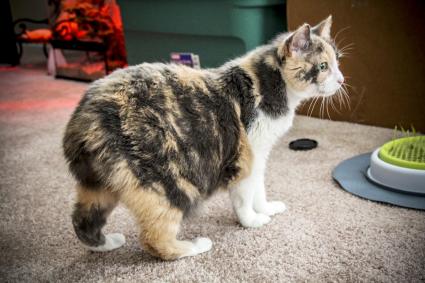 Some Manx cat breeders dock the stumpy or full tails of kittens at birth. They dock the tails as a preventive measure to avoid arthritis of this area that can cause the cat severe pain. In the past, tail docking was more common than it is today. However, it is still practiced more in the United States than other areas throughout the world.

On the other hand, many breeders believe docking is unnecessary. This is because Manx cats with tails have been born on the Isle of Man for hundreds of years with no known medical problems documented as a result of having tails. The practice of tail docking Manx cats is occurring less as more cat breeders learn that a Manx cat can have a full or partial tail without suffering health problems.

Due to sincere and dedicated breeders that are educated about Manx cat health issues, these beautiful cats suffer fewer health problems today than they have in the past.