Manx cats are a rather old breed, yet they haven't found mainstream popularity amongst average pet owners. Find out about the characteristics and personality of this undervalued breed.

Manx cats are a perfect example of what happens when nature is left to its own devices. This breed traces its origin back to the Isle of Man off the coast of Britain. As seamen anchored in the island's ports, their cats also took the opportunity to jump ship. As a result, numerous breeds were mixed together with certain characteristics proving dominant in the breeding population.

It's difficult to find felines with a rounder appearance than Manx cats. Even the Persian with its round flat face doesn't quite compare in body type with the Manx. The finest Manx specimens have a very rounded body with a significantly arched topline raising from the back of the neck and descending to the rump. The front legs are short and stocky, while the rear legs are muscular yet longer. This makes these cats higher in the rear.

The heads of this breed are also quite rounded, although not flat-faced like a Persian. The cheeks are delightfully plump and circular. As with so many cat breeds, the Manx's eyes are most responsible for its slightly superior, yet still undeniably sweet expression. The eyes are quite round, but seem to tilt slightly upward at the outer edges.

Manx cats come in both short and longhair varieties.

The Tale of the Tail

Of course, it's the Manx's tail, or lack of it, that truly distinguishes this breed from other cats. Although a Manx may be born with anything from a full length tail to completely tailless, it's the tailless specimens that are most prized. It's believed that this genetic mutation is traced back to a single cat that came to the island via a Spanish ship. The tailless gene is less than completely dominant, but even cats born with full tails can produce tailless kittens when bred.

In breed lingo, a completely tailless Manx is affectionately referred to as a "Rumpy", while cats with the next best stub-length tail are referred to as "Rumpy Risers". Note that only these specimens are considered eligible for championship competition at cat shows. Specimens with longer tails may only be shown is Any Other Variety class according to Cat Fancier's Association rules.

The overall personality of this breed is affectionate and rather playful. In many respects, their behavior is often dog-like. The typical Manx is likely to make a strong connection with at least one human family member, however, some like to spread the love around equally. Since these felines do become so attached to their human companions, it can be difficult for them to adjust to new homes should the need ever arise. For this reason if no other, you should think carefully before adding a Manx to your household because you're meant to provide a stable home for life. 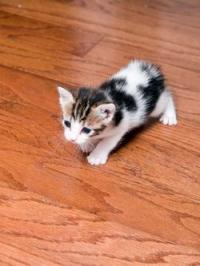 It's interesting to note that the very gene that makes this breed so distinctive also contributes to their greatest health problem: spinal deformities.It's difficult to judge whether a kitten is healthy until it is close to 16 weeks old, so breeders tend to hold kittens back for evaluation until they reach this age.

Most common health problems in Manx cats include:

Not surprisingly, the repeated occurrences of these health problems have caused both concern and controversy over perpetuating the Manx breed. In an effort to keep health problems in Manx cats to a minimum, breeders incorporate full-tailed Manx into their breeding programs. Additionally, some breeders will also refrain from breeding tailless specimens together.