Meet the Norwegian Forest Cat, once the companion of Vikings! These sturdy, distinctive cats are people lovers who will delight you with their beautiful coats and charming personalities.

If you haven't heard of the cats of the Norwegian forest before, it's probably due to the fact that, although they first made their North American debut in Leif Erickson's day, they didn't "officially" arrive in the USA until 1979. It's believed that this distinctive cat is actually one of the ancestors or the famous Maine Coon Cat. There is definitely a strong resemblance between the two breeds, but Norwegians are a bit smaller.

As the name implies, this breed actually lived in the forests and villages of Norway, where it perfectly adapted itself to the chilly environment. Its body is very sturdy with good muscle tone. Overall, the cat presents a well-balanced look. The head should look like a perfect triangle when viewed from the front, and the eyes are almond-shaped and raised slightly higher at the outer rims. Eye colors in purebred Wedgies range from gold through emerald green, although some cats with interbreeding behind them may display other colors.

Wedgies, as they are affectionately called, have coats that are incredibly thick, double-coated as they are, and quite water resistant; a necessary feature to survive in the Norwegian winter. Even the ears are heavily furnished, with distinctive tufts of hair extending from the tips and inner ear flaps that make them resemble a small Lynx. The feet hold thick tufts of fur between the pads to protect them from snow and ice. During the coldest months, Wedgies develop luxurious neck ruffs that become fuller each year as the cats mature.

Come the warmer months, these felines quickly drop their excess undercoat and are left with mainly the long silky guard hairs. You might expect such a heavily furred breed would be difficult to maintain in tip top condition, but this simply isn't so. Cats allowed outdoors groom naturally by rubbing against trees to remove loose fur. Indoor cats can get by with a weekly brushing, needing the most attention during their annual molt.

Wedgies are people lovers, and like to spend time lying close to you, although they aren't truly "lap cats". They can be quite vocal when they choose, but perhaps not as insistent as the Siamese.

The fact that these cats have strong hunting instincts cannot be ignored, especially if there are smaller pets in the home such as birds and rodents. Take care these vulnerable pets are appropriately housed for their own safety.

It should also be noted that Wedgies are natural climbers, so it's a very good idea to provide them with an indoor cat tree, so they can get plenty of exercise and perch themselves high as they often love to do.

By and large, the breed is relatively robust, but there are two health conditions that breeders are currently dealing with. 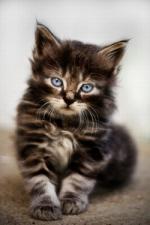 Glycogen Storage Disease type IV is caused by the absence of the glycogen branching enzyme, which affects the way glucose is stored and metabolized in the body. Most kittens with this defect are either stillborn or die shortly after birth. Others do not begin to display symptoms of the condition until they are a few months old.Symptoms include:

The disease progresses to severe disability and eventual death. At present, there is no treatment or cure for the disease, and responsible breeders are removing traceable carrier animals from breeding programs. Veterinary researchers are trying to develop a DNA test to make it easier to identify affected kittens.

Retinal Dysplasia (RD) is a condition that causes a malformation of the eye's retina. In many cases, it simply causes small blind spots in a cat's vision that may not even be noticeable to the animal or its owner. Larger malformations may result in some vision loss or blindness.RD is basically caused by a viral infection contracted at birth, although the condition can also be inherited. There is no treatment for the condition at this time.