Ragdoll cats are large, gentle cats whose name comes from the fact that they go completely limp when picked up. Ragdolls have a reputation for being a serene and friendly breed, and they are notably affectionate toward their owners.

The Origin of Ragdoll Cats

Ragdoll cats are a relatively new breed in the cat world. Unlike some other cat breeds, their origins involve some stray cats.

Beginnings of the Breed

The Ragdoll actually originated in California in the early 1960s. Ann Baker, of Riverside California, bred a white stray female she found with other cats that were mostly strays to achieve the very calm and gentle temperament that is so well established in the breed today.

Why These Cats Are Called Ragdolls

Ragdolls get their name from one of the key characteristics Ann Baker was breeding for. When these cats are picked up, they tend to go rather limp in your arms, just like a stuffed, cloth rag doll toy that flops without support.

Ragdolls have a naturally relaxed and easy-going personality. Their gentle, sweet natures and love of people make them wonderful family pets. They are safe to keep around small children but consider covering the claws with a product called Soft Paws if you're concerned about scratches.

It is much safer to keep these felines as indoor house pets. Most Ragdolls are so docile it can be dangerous to let them go outside since most do not hunt and some don't seem to understand how to defend themselves if attacked by another animal.

According to the Cat Fanciers' Association (CFA), a mature Ragdoll of between three and four years of age can weigh ten to fifteen pounds for females and from fifteen to twenty pounds for altered males. 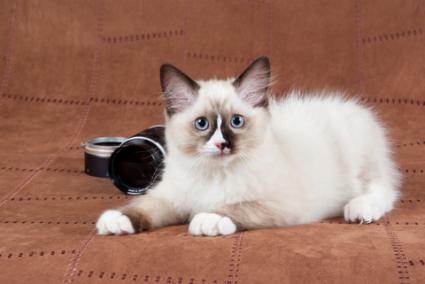 These cats are semi long-haired with silky, plush coats. Their fur colors include:

Additionally, these colors also come with different patterns, including: 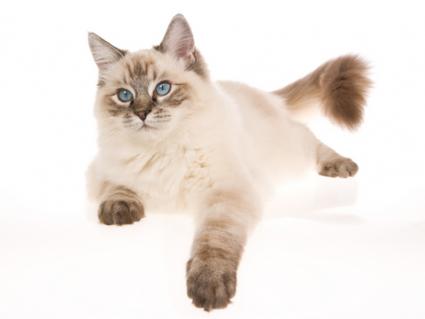 These additional patterns on pointed cats include:

For a complete rundown on colors and patterns, visit the CFA breed standard.

According to VetInfo.com, there are certain health issues associated with this breed. These include, but are not limited to:

No cat is truly hypoallergenic but there are some breeds that cause fewer problems for allergy sufferers. The Ragdoll commonly does not appear in the top listings of "hypoallergenic" cats however they can be a good choice for someone who loves cats but has allergies. Because Ragdoll cats do not have an undercoat, they shed less than other breeds. This also leads to them producing fewer allergens than many other breeds. However, they still do shed so anyone with a cat allergy should be aware they may have difficulties bringing a Ragdoll into their home, although potentially not as much as with other breeds. 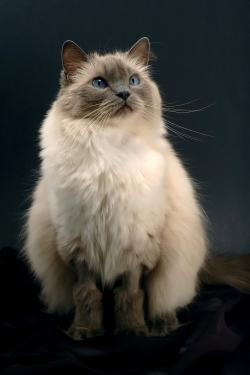 Perhaps because of their popularity and docile nature, Ragdolls have become the brunt of a number of urban myths. Despite popular opinion, these felines are not from another planet and are indeed normal cats, just a little calmer.

Although these kitties are very calm and collected, they can certainly get frightened and feel pain just like any other living creature. Don't let their apparent apathy fool you!

Ragdolls Can't Hunt or Defend Themselves

While it's true cats of this breed rarely hunt or fight with other animals, they do have the ability. However, clumsiness can be a trait with this breed, so don't expect a Ragdoll to keep your home mice-free.

Just because they're relaxed doesn't mean they're dumb. Ragdolls are just as trainable as any other breed.

People With Allergies Can Tolerate Ragdolls

Despite their thick coat, Ragdolls lack a layer of undercoat and shed very little. This certainly makes housekeeping easier, but the fact is that allergies are commonly caused by a certain protein found in pet dander and saliva. This, unfortunately, means that Ragdolls will cause allergic reactions just like any other breed.

If you're truly considering make a Ragdoll part of your life, be sure to do more research about these lovely cats. You should investigate what Ragdoll kittens can be like and what you can expect to pay for a purebred from a breeder. If you prefer to find a Ragdoll cat from a rescue group, there are shelters and private agencies that can help.

The following referral services can help you locate breeders. It is up to you to evaluate carefully the breeder and the cattery to make sure you are dealing with a reputable person with healthy stock. Aside from that, visiting breeders gives you a chance to interact with a number of Ragdolls and hopefully find just the right pet for you.

Should You Get a Ragdoll?

Ragdolls can be excellent pets, especially if you want a loving, friendly companion that will be affectionate to everyone in your home and visitors. They're large cats, so make sure your home is equipped for them. Ragdolls require almost no grooming, shed very little and can be trained quite easily. They also adapt very well to small apartment living.

On the other hand, Ragdolls may not be the right breed for you if you need to leave your cat alone for long periods of time. They like attention, but they aren't as "emotive" as many cats.

Ragdolls and the Indoors

Ragdolls should stay indoors as much as possible, and they should usually only be taken outside on a leash for short periods of time. They almost never hunt, and they aren't very effective at it when they do. Don't choose a Ragdoll if you need a mouser. All in all, Ragdolls are very dependent cats that need a good deal of love and attention. If you're capable of giving that, this could be the breed for you.

Ragdoll cats are calm, gentle cats that can make wonderful feline companions. Despite their size, they are quiet and would enjoy being your faithful friend without causing a lot of intense kitty energy and they have minimal care needs, making them a great choice for older adults and seniors, as well as families with quieter children.