Once you cast your eyes on a Russian blue cat, you'll find it difficult to look away. These gorgeous felines have a distinctive beauty, and they make wonderful pets.

The origins of the Russian Blue are for the most part unavailable. Some believe these cats originated in Russia as their name implies, while others say the breed is actually of Swedish descent. Not much else is known before these cats were exported to England and the USA. In 1949, the breed was officially accepted by the Cat Fancier's Association (CFA) for registration.

The breed experienced a surge in popularity in the 1970s, but this quickly dropped off a decade later because Russian Blues at that time had gained a reputation as being difficult to handle. Dedicated breeders worked to improve the personalities of these alluring felines, and the result is the quiet, gentle and even a bit shy cats we know and love today.

The overall body type of this breed is athletic and graceful. The bones are fairly fine, and the body is slightly elongated yet still balanced. Heads are basically wedge-shaped, but not to an extreme extent.

There are two things that really distinguish the Russian Blue from other breeds, and the first is his coat. It is a striking shade of blue/gray with just enough silver tipping to give it a remarkable sheen. The coat is medium length, extremely plush and should stand on end due to its density.

Unlike other breeds that are known for their glorious coats, such as Persians and Maine Coons, the coat of the Russian Blue is fairly easy to care for, and a good weekly brushing is usually all that is needed to keep things in good condition.

This breed's other most distinctive characteristic is their eyes. At their best, they are a rich emerald green color that makes a fascinating contrast to their glossy blue fur. The eyes are round, of good size and set well apart.

While some breeds may extol the virtues of cats that are so friendly they are practically dog-like, this is not the case with Russian Blues. These cats do have wonderful personalities, but they do not give their attention or affection frivolously. A Russian is a cautious cat that likes to take his time getting to know you, and will usually do so from a distance before deciding whether or not to approach you. If you are patient, and if you are found worthy, you will be rewarded with a calm and exceptionally loving companion.

It's also worth noting that these felines generally tend to be "one person" cats. Although they may treat all regular household members with a certain amount of acceptance and affection, they often single out one person to become their special friend and will shower that lucky soul with devotion.

Overall, these cats enjoy good health, and there are no particular genetic diseases associated with the breed at this time. Regular exercise and a healthy diet are generally all that is required to keep a Russian in good condition. However, it should be noted that these cats have healthy appetites, so obesity is something to keep an eye on. Other than that, these cats enjoy active lives well into their teens.

Controversy Over Out Crossing

In recent years, there has been some out crossing of Russian Blues to other breeds in an attempt to introduce color varieties within the breed. Some breeders strongly feel that this would take away from the breed's very unique look, and they are heartily against the move. In response to the controversy, the CFA Russian Blue standard has been amended to specifically state that there are no out crosses allowed, and that long coats or any other colors are a disqualification. 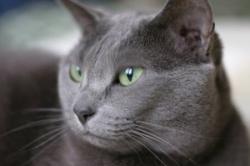 Russian names for males include:

Russian names for females include:

If you're looking for a beautiful and loyal companion, consider a Russian blue. Not only are these cats lovely to look at, but if you are their special someone, they'll be loving and loyal.