Understanding the basics of feline sexual behavior can help you deal with challenges like spraying and fighting that can make your cat difficult to be around at times. Learn how to identify the root of the behavior and find a solution to troubling traits.

As veterinarian Key explains, male kittens go through some notable milestones before reaching sexual maturity as a Tom cat capable of fathering kittens.

Landmarks of a Male Kitten's Development

A testosterone surge around the time of birth sets the kitten's future behavior as male. However, up until around 12 weeks, the male kitten is the equivalent of a toddler or small child. Only after 12 weeks is there enough background testosterone for the kitten to enter the cat equivalent of puberty. Between three to six or seven months, the young male cat is growing and maturing into a young cat capable of mating.

When a young male under six months of age mounts another cat, he is more likely to be 'playing' or 'practicing' than actually mating. It isn't until around nine to 12 months of age that a male cat's hormones prompt him to actively seek out a girlfriend. But of course, if you have a male and female kitten in the same house together, you can't use the boy's age as a contraceptive. You need to assume he might father a litter from as early as five months of age.

It's interesting that in the wild, a male cat sets up his own territory at around 12 - 18 months of age, which is also when his thoughts turn to fathering kittens. As part of this behavior the male roams further afield and sprays to scent mark his territory. These actions will be recognized by owners of entire male cats as:

Mounting Behavior in the Neutered Male

Although neutered, a male cat produces testosterone but at a lesser level. Bonnie Beaver explains [Second Edition, page 172] it is high testosterone that causes spraying, roaming, and fighting and therefore neutered males are more home loving and attentive to owners.

So what does it mean if your male cat humps toys or mounts other cats?

In truth, this is unlikely to be true sexual behavior. If the male was an experienced adult when neutered, he may have learned behavior which he carries out from a force of habit. Bonnie Beaver writes [2nd edition, page 174] that around 10% of neutered males continue to mount objects out of habit, with their behavior triggered by 'Intense stimulation' such as strangers coming into their territory.

Pam Johnson-Bennett recounts how neutered males may hump other cats in the house as an attempt to reinforce their status, whilst mounting toys can a means of venting excess energy. And finally, the strong scent of a female cat in heat may reawaken instinctive behavior and out of excitement cause a male to mount an object close to paw.

Strategies to reduce mounting in neutered males includes providing an outlet for energy with energetic play. He should also be able to express normal behaviors such as climbing and clawing, so he can supervise his territory. For the cat the mounts toys or even human legs, then a quick spritz with water can help break the habit. Whilst for the bored cat Pet Place suggests ways to make life more interesting. 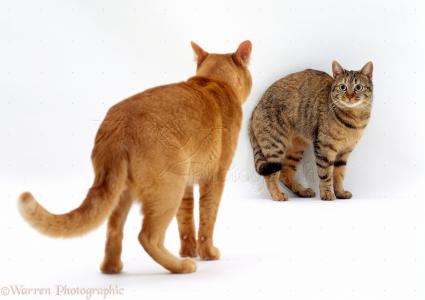 An entire female cat comes into heat approximately every three weeks. To the uninitiated a female cat in heat may appear in great pain, so avoid an unnecessary trip to the vet by knowing what the signs are.

Landmarks of a Female Kitten's Development

Veterinarian Key explains the age at which a young female becomes sexually mature is influenced by many factors including:

An average age for a female kitten to enter puberty is five to six months. However, this can be earlier or much later (as late as 18 months) depending on the factors listed above.As a rule of thumb, a kitten born in the spring that has plenty of food and an intact male for company, is more likely to fall pregnant than a lone autumn born kitten surviving on not much food.

A female cat comes into heat approximately every three to four weeks. Whilst in estrus (or heat) she will accept a male's attentions and may fall pregnant. Each estrus lasts around three to five days. In a home setting with artificial light and heating, a female may cycle all year round, whereas her feral feline cousins tend to peak between February and April, and again between June and August.

A female cat not in heat is hostile to the advances of a tomcat. She will hiss, spit, and swipe out at him. Whereas, when she is in heat her behavior is flirtatious and she readily welcomes his attention. Indeed, the behavior of a female in heat can seem alarming to an unsuspecting owner and according to Pet Informed includes:

Desexing the female cat involves removing the ovaries and uterus. Her behavior then evens out and is similar to her 'non-estrus' state, but all year round.

The link between sexual behavior and normal cat behavior is tightly woven. PetMD explains when a cat feels insecure or threatened, they are liable to mark territory (with spraying or clawing) which can be mistaken for sexual behavior, when it is actually down to the basic need for reassurance.

When Your Neutered Male Sprays 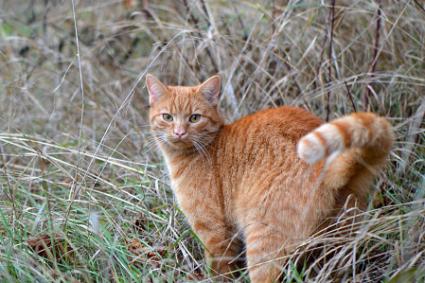 A neutered male that sprays is often territory marking out of insecurity, rather than any sexual motivation. Hall Place Veterinary Center explain the answer is to help him feel more secure. This requires a two-pronged approach:

If Your Neutered Female Comes Into Heat 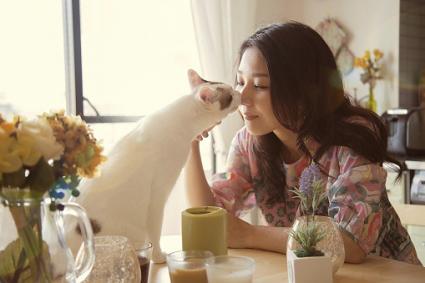 Once desexed a female cat should not come into heat. However, some female cats become more loving and affectionate after the op, which can be mistaken for estrus. Monitor her behavior to see if she is friendly all the time or if it goes in three-week cycles.

PetMD recount how occasionally a small piece of ovarian tissue is left behind during surgery, and this can cause the female to cycle. However, the good news is that as long as the womb was removed she cannot get pregnant.

If your cat starts to act oddly then take notice, especially in neutered or desexed cat. In the first instance, get the cat checked by a vet. Behaviors such as frequently passing urine could be sexual behavior but it can also be a sign of a urinary infection. Never assume odd behavior is sexual until the cat has been passed as healthy. Even then, know, behaviors such as spraying, are the actions unsettled or insecure cat. Never punish the cat, but instead seek the advice of a certified pet behaviorist.

95
Comments
© 2006-2021 LoveToKnow, Corp., except where otherwise noted. All Rights Reserved.
What Your Need to Know About Feline Sexual Behavior