Did you know that Siamese cats are one of the oldest, if not the oldest known breed of cats? Learn some fascinating facts about Siamese cats, including the many gorgeous color patterns these beauties display.

There's a good reason Siamese cats are listed in Animal Planet's list of Top 10 Cat Breeds. These animals are truly beautiful and have a wonderful disposition.

According to the CFA show standard: 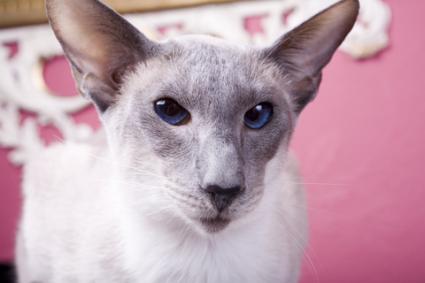 A true Siamese coat is very short, and should feel quite silky to the touch.The real glory of the Siamese coat lies in its coloring. The base coat color comes in various shades of white, cream and bluish-silver, but it is always lighter than the "points." Those are the shaded areas on the legs, tail, ears and face.

It's interesting to note that all Siamese kittens are pure white at birth, and the points gradually develop later. Most Siamese won't achieve their true depth of color until they are more than a year old.

The extreme look of this breed might lead a person to believe that they would be quite stand-offish in temperament, but actually quite the opposite is true. Siamese cats are generally people lovers, and they more likely to show great interest in whatever you're doing. They love to be cuddled and caressed.

In addition to being rather affectionate, this breed can also be quite vocal, almost giving you the impression that you're being spoken to in "cat." If a Siamese wants something, you can be sure it will find a way to make you understand.

When compared to the needs of such long-haired breeds as Himalayans, Persians and Maine Coon Cats, the Siamese requires very little in the way of grooming.

Brushing can actually damage the color and texture of a Siamese cat's coat. A better alternative is to use "finger brushing" to remove loose hair. Simply wet your hands and run them smoothly over your cat's coat. The loose hairs will collect on your fingers, and can be removed with a paper towel before washing.

Bathing is rarely needed. If you aren't comfortable giving your cat a water bath, try using corn starch instead. Sprinkle it all over your cat, being careful to keep it out of its face, and gently work it in with your fingers. You can gently brush it out with a soft bristle brush, or wipe it away with a chamois.

Give Special Attention to Ears

The ears of this breed are meant to be show stoppers. If you would like to enhance their width, try trimming away the longer hairs just inside the baseline. This will give the illusion of greater width, and promote better air circulation.

In general, Siamese cats are a healthy breed and many live as long as 15 years, but according to VetInfo.com, there are several health issues in the breed to be aware of. 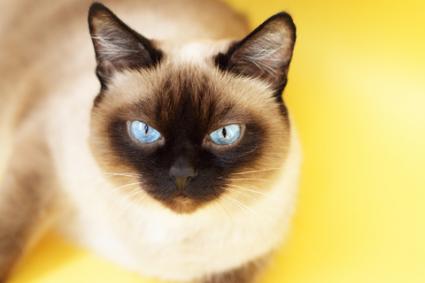 According to the National Siamese Cat Club, the breed originated in Thailand, which was formerly know as Siam, and this is where the breed got its name. It's believed the breed was developed under the protection of Siam's royalty, and the Siamese was imported to England in 1881 where it became exceedingly popular. Americans soon began importing the new breed back to the states, and it became firmly established as one of the most popular breeds ever.

There are two very distinct types of Siamese that fanciers typically class as show Siamese and traditional Siamese. The original Siamese imported from Siam was much closer to the CFA standard described above. During the flurry of breeding that went on following World War II, a cobbier Siamese with a rounder, "apple head" began to emerge. It's believed that this was the result of crossbreeding the Siamese with other cat breeds, but since this type became so prevalent, many enthusiasts came to believe it was the original type of the breed. Since that time, show breeders have worked diligently to preserve the true Oriental Siamese type and restore it as the correct type of the breed.

Is a Siamese Cat Right for You?

This breed is known to become very attached to its human companions, so unless you have plenty of time to spend with one, you might consider looking into a different breed. These cats are also quite energetic, so consider whether you'd prefer a cat who sleeps all afternoon or one that is always ready for a good game of chase-the-mouse.

Siamese cats are both lively and affectionate, and are often said to behave more like dogs than cats. If you are looking for a cat that's low in maintenance, but high in personality, this breed just might fit the bill.