Cats certainly purr as a form of communication. However, there may be more to this purring business than meets the eye. There's some evidence that cat purring may also promote healing.

If you live with a cat, you're bound to have heard her purr at various times. Cats purr in a variety of situations.

Just like people, cats can use their vocalizations to express their emotions. A soft and steady purr might mean a cat is feeling relaxed, but the tempo and volume of a purr can indicate very different feelings.

If a cat's purr becomes significantly louder and begins to race, this may be a sign that the animal feels agitated. For example, this might happen when the cat tires of being petted and wants you to leave her alone now. Sometimes she backs up her warning by trying to bite. This doesn't mean she's vicious, she's simply communicating with you using her own unique cat language.

Connection Between Purring and Cat Health 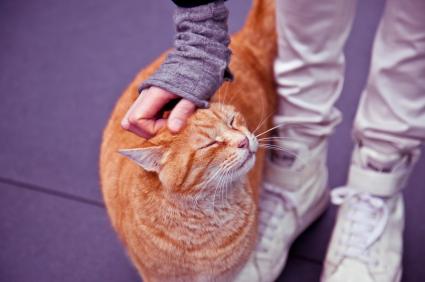 According to Leslie A. Lyons, assistant professor at the School of Veterinary Medicine at the UC Davis, there's some evidence that purring affects a cat's health.

In an article published at Scientific American, Professor Lyons states that a cat's consistent purring frequency ranges between 25 and 150 Hertz, and that sound in this frequency range may promote bone density, as well as healing. She also theorizes that purring can stimulate bones and muscles without making the cat expend a lot of energy.

The healing theory may be backed up by a study cited by the University of Alaska, Fairbanks. The study was conducted by Dr. Wayne Whitney and Dr. Cheryl Mehlhaff at the Animal Medical Center in Manhattan, New York. Out of 115 cats brought into the center with injuries that resulted from an average five-story fall onto pavement, 104 survived and recovered. This equates to a 90-percent survival rate, which is quite impressive considering the circumstances. Maybe purring does promote healing.

No one completely understands how cats purr, so it's no wonder that people still question exactly why they purr. Scientists generally believe that cats create the purr using their larynx and diaphragm to produce that steady rattle as they breathe in and out. Perhaps there is some healing benefit to this vocalizing, even though it might be as simple as using those vibrations to release stress. However, just observing what your cat's up to when she purrs will help you understand what she's trying to tell you. In the end, some of the answers may remain a bit of a mystery. After all, cats never like to reveal all their secrets.