Any cat owner knows that their feline friends can have some odd, albeit adorable, behaviors. Licking their humans is a common cat behavior that can have a number of reasons behind it.

Why Does My Cat Lick Me?

Cats engage in licking behavior with their people for several reasons. You'll have to observe your cat's body language and the context of the behavior to help you determine which of these scenarios explains your cat's actions.

Young kittens are groomed by their mothers, and they learn in turn to groom other cats as a way of forming and maintaining social affiliation in a cat colony. This is known as allogrooming. By licking you, your cat may be simply saying that they enjoy being with you and are grooming you as part of that loving bond. If your cat licks you when they appear comfortable and relaxed, such as during a snuggling session on the couch, the licking is most likely a sign of their positive feelings toward you.

In some cases, cats will lick their owners because they were weaned too young as kittens. As a result, they develop a need to simulate nursing behavior because they were deprived of that nurturing experience. If your kitten or cat licks obsessively and does this along with other self-soothing behaviors like kneading, there's a strong possibility your cat was weaned from her mother too early. 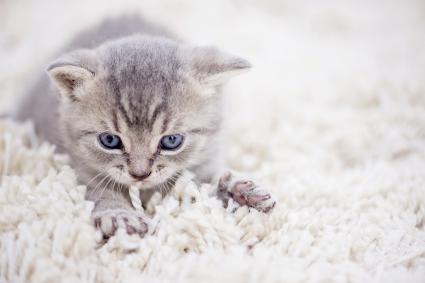 Another reason that cats may enjoy licking you is that you simply taste good. They may find the salt from sweat on your skin appealing. They may also lick your hands after you've prepared a meal, either for them or for yourself, as there's a chance your hands may still smell like food and have some residue on them that's tasty. This behavior might lessen if you change the cat's diet, as they may lick because they're missing some nutrients in their diet that they're attempting to find from licking your skin.

Cats will sometimes lick other cats as a way to establish that they're part of the same social group and in some cases to show ownership. For example, a mother cat will lick her kittens, which causes them to pick up her scent. It's a sign to other cats in a colony that these kittens are hers. Some believe, therefore, that a cat licking its person may be establishing that the owner is their "territory." This type of licking may happen more often in homes with multiple cats or if your cat is bothered by an outdoor cat near your property. It may also be accompanied by the cat rubbing the sides of its head against you, which is another way of dispersing its scent on you.

An alternate reason for licking behavior is when a cat licks a human as a way to alleviate feelings of anxiety and stress. The licking is a displacement behavior, much like when a person will chew their nails when they feel nervous. If your cat has been showing other stress-related behaviors, such as crouched or low body language, hiding excessively, or fear, it's likely their licking you is related to not feeling comfortable in their environment.

If you have a cat that licks you and then bites you, this is often a way for a cat to get attention. They may be trying to solicit you to play and are "escalating" the attention-seeking behavior of licking to biting when you don't comply. Cats who do this probably did not learn good play habits and bite inhibition as kittens. It's important to know in these cases they aren't trying to hurt you but are using inappropriate behaviors to get you to engage with them more. 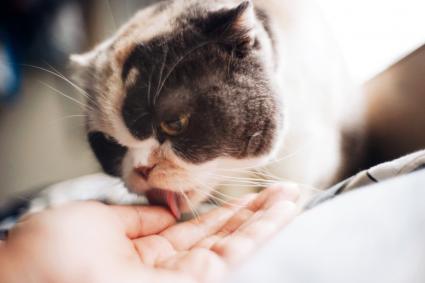 In cases where the cat is licking because he's clearly unhappy, such as anxiety, it's best to make an appointment with your veterinarian for a check-up. Stress can come from internal medical conditions you may not be aware of, and in the event where the veterinarian can rule out illness, he or she may prescribe anti-anxiety medication with an accompanying behavior modification plan to make your cat feel better. However, when it's clear your cat is just licking you because they want to show affectionate behavior, you can choose to allow it without much concern. Some cat owners dislike the behavior, though, because a cat's tongue is quite rough, and it can be uncomfortable.

If your cat is licking and biting you to get your attention, keep a toy handy and redirect your cat to a toy when they start to lick you. The best types of toys in this instance are ones that keep your hands away from the cat, such as fishing wand toy that you can have your cat chase. Keep some cat treats handy as well to reward your cat for playing with the toy and ignoring licking your hands or other parts of your body.

Don't use aversive methods such as scruffing or pushing the cat away, as the cat will learn that trying to bond with you is a bad thing. You should also avoid putting any type of taste deterrent on your body, such as Bitter Apple. Aside from pairing you with something bad in the cat's mind, there's a good chance you can end up accidentally getting the substance on your hands, in your mouth, or in your eyes, which is extremely unpleasant.

Why Cats Lick Their Humans

As you can see, there are many reasons that a cat will lick its owners, and most revolve around the cat expressing their emotional state. It can mean your cat is happy and wants to bond more with you or relate to you as if you're its mother. On the other hand, it can be a sign your cat is anxious and upset, and possibly ill. The best way to tell is to observe its other behaviors to determine if the licking is positive or negative and speak with your veterinarian if you believe your cat is suffering from stress.

0
Comments
© 2006-2020 LoveToKnow, Corp., except where otherwise noted. All Rights Reserved.
Resources, Advice & Tips for Covid-19
Read More
Why Does My Cat Like to Lick Me?