It's common among cat lovers to hear opinions about the personality of cats with certain coat colors. Black cats often get a bad rap because they're considered unlucky with aloof, mysterious personalities. In truth, all cats regardless of their color should be treated as individuals with unique characters.

Is There a Black Cat Personality?

Research has been done to find a link between coat color and personality in cats but no definitive results have been found. While there is some evidence that an animal's color can be related to temperament, such as the famous experiment with the Russian scientist Belyaev's foxes, it's not clear how much color is related to personality and what other factors come into play. During this experiment, the tamest foxes were bred to each other to produce successive generations of foxes that were less fearful of people. These "friendlier" foxes however also lost their original silver-black coloring and were piebald, along with other physical changes like floppy ears and curly tails. The study showed coat color and temperament in animals are related though it's not clear to what degree one influences the other.

The Impact of Breed on Personality

One should also consider that black can be found in 22 different cat breeds and one breed, the Bombay, only comes in black. Each of these cats can have different personality traits based on breed tendencies more so than their color. Bombay cats in particular are known for being very outgoing and affectionate with "dog-like" personalities and experience with this breed could lead one to think all black cats are fun-loving, extroverted characters.

While scientists have not substantiated a link between coat color and temperament, one interesting finding about black cats is that they may be more resistant to disease. The presence of melanism mutation seems to provide extra protection against infectious diseases like FIV. This trait possibly could have an influence on personality in that black cats could be more laid back and friendly because they're less susceptible to health problems that could plague kittens of other colors leading to less socialization during important developmental periods. 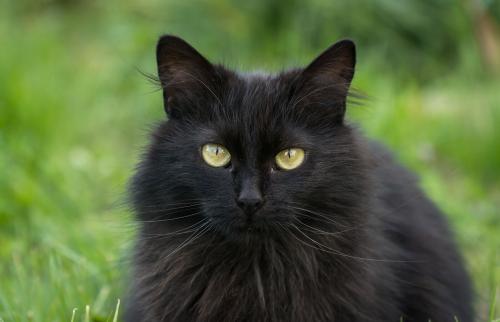 Another theory is the idea that black cats may tend to have the same personality traits because they're influenced by their owners. Studies have found that there's a link between the personality of a cat owner and the cat itself, including issues like anxiety, aggression and other behavior problems. If a certain type of owner prefers a more aloof cat gravitates toward black cats, there's a clear possibility this can "produce" black cats that are less friendly because they've been unwittingly conditioned to this behavior by their owner.

In a similar vein, it's possible that black cats can be seen as having more "attitude" and aggression than other color cats because for years, black cats were associated with witches and dark forces. If you're predisposed to believe such things, you may perceive a black cat as being intimidating and unfriendly whereas a cat with the same personality but different color might seem completely different. This varies by culture as well, as in Japan black cats have a long history of being considered lucky, especially for unmarried women, and black cats in Japan are widely considered to have desirable personality traits (and even their own cafe!). 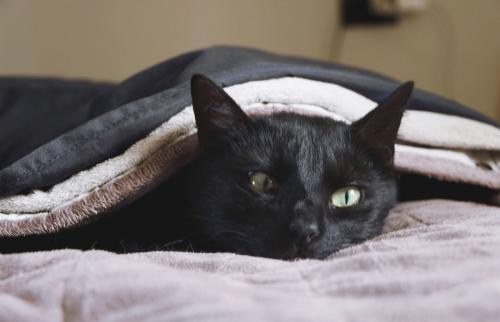 If you're looking into bringing a cat home, whether it's a kitten through a breeder or a cat you'll be adopting from a shelter, you may be concerned about whether there's a basis for the negative stereotypes about black cats. There are some simple ways to assess a strange cat's personality to see if they'll be a good fit for you, regardless of their color.

Try to meet the cat or kitten more than once, if possible. Sometimes you meet a cat who seems shy or irritable and like humans, maybe they're just having a "bad day." Or a cat that seems perfectly friendly the first time you meet may show other characteristics you don't enjoy as much after additional encounters. It's obviously not always an option if you have to travel a long way to meet a breeder or a cat is soon to be adopted, but in that case try to break up your visit into smaller sessions that same day.

Allow the cat to come to you to say hello and do not pressure them as cats do not respond well to this. You want to see if the cat is outgoing and friendly, or shy and nervous or in the case of some black cat stereotypes, aloof. A cat that comes right out to greet you is likely going to be an extroverted kitty. One who observes you quietly may be just as affectionate, but needs more time to get to know you and is a sensitive cat.

If you can, bring in an interactive toy, like a cat fishing pole or a small cat toy you can toss around. See if the cat plays with it and engages with you. This will give you an idea of how playful the cat is and whether they'll find play reinforcing, which can help with training and behavior issues later on. If they don't interact with the toy, it could just mean that they're not "into" toys or they're feeling nervous at meeting you. 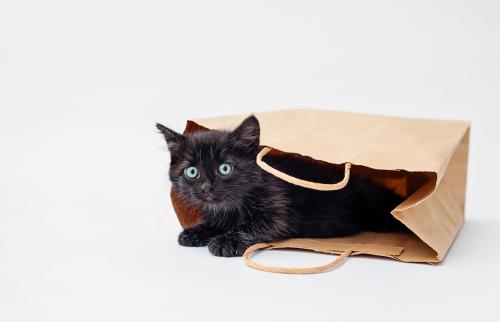 Watch the cat's body language during the meeting or meetings to see if they appear relaxed or stressed. Also be sure to observe their body language toward other cats if they're in a litter or in a shelter with a cattery-style setting. It can be harder to observe body language with some black cats due to their coloring so make sure you're in a well lit room and take some time to see how they interact with their environment to develop an idea of who they are as a cat.

Always remember that despite myths you may have heard about a cat's personality based on their coat color, there's yet to be found a definite scientific basis for these beliefs. It's true that some black cats may be aloof but you will definitely meet just as many that are friendly, silly or sweet. Meet each potential cat with a "neutral" playing field and give them a chance to show you what their "true colors" are like through interaction, observation and play.