When dealing with problem behaviors from your cat, it can be frustrating attempting to communicate with another species to let them know you're unhappy. Unfortunately, how you do this can have negative consequences on the cat's future behavior and relationship with you. Using positive reinforcement and understanding why a cat does the things it does is the key to a happy feline household.

Principles of Cat and Animal Behavior

It helps when dealing with any undesirable behavior to understand how cats learn. These principles of learning and behavior are the same for all animals, including humans! Basically, the more you reinforce a behavior, the more you will get that behavior. Likewise, the less successful a behavior is, the less likely an animal will repeat it. So the key with training any animal to stop doing a behavior is train them to do what you want instead. It is far easier for the animal to understand "do more of this and good things will happen" than to "not" do a behavior without any alternative offered.

Why Punishment Is Counterproductive With Cats

While you will no doubt read all over the Internet about using punishments like squirt bottles to stop a cat from doing something, this is actually not a good idea. There are several reasons: 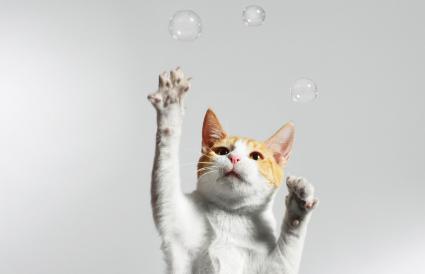 Work With Your Cat to Correct Problems

For many types of unwanted behaviors, the most effective and kindest way to stop a cat from doing something you don't want is to follow these five steps.

Step 1: Why Is the Cat Behaving This Way?

Understand what the motivation behind the behavior is. Note that it's very important to understand the motivation of the cat as a species rather than using anthropomorphism, which is the assigning of human motivations and emotions to an animal.

Determine the behavior you'd prefer your cat to be doing instead. For example, if your cat is jumping on the counter, you can decide you want them to have all four paws on the kitchen floor. Katenna Jones, an Associate Applied Animal Behaviorist who works with cats says she, "Tells clients to look for the glass half full" in the scenario.

Set up your environment so that your cat can't do the undesirable behavior and has access to more enticing options which encourages him to do the alternate behaviors. Jones gives the example of a cat that eats houseplants. Put the plants out of reach and put some edible cat grass or plants there so he can nibble on them and satisfy his natural urges.

Reinforce your cat for the behavior you want to help his kitty mind understand what you want from him. If he gets things that he enjoys when he does the things you want, this helps him want to do them more.

If your cat's problems are more complicated or serious or if there could be a possible medical issue, do not hesitate to reach out to a veterinary or behavior professional for help. Likewise if you've tried these steps and are not seeing improvement, a professional can give you some pointers on things you might have missed. You may not need this step in every situation but in ones where you do, asking for help can be a real solution to a problem that results in a better life for you and your cat.

Using the five-step method, look at your cat's biting behavior and understand why he's doing it. 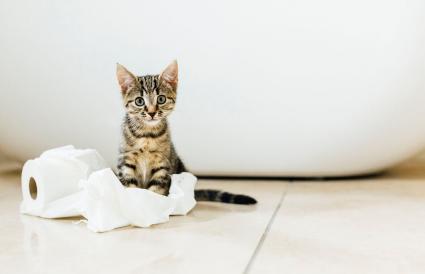 Anyone who owns a cat knows about the scratching which can cause havoc on your belongings.

If you have two cats that fight, this is an issue that most likely would benefit from professional assistance. However you can still use the five-step process to understand more about what's going on and put some prevention in place.

There are many other common problems that cats can engage in that humans find unpleasant. This can include not using the litter box, excessive vocalization and urine spraying. With all of these problems, break them down using the five steps and working to understand the species-specific basis for the behavior and finding something more acceptable to you to reinforce your cat to do. It's important to know with any pet behavior problem that they are not doing it out of spite or anger or any other complex emotions but because there is something inherent in their behavior that causes them to need to do it. If you can find out what that is and provide them with a better outlet, you can solve the problem without causing more stress on the cat. Knowing what your cat needs and how to provide it in a healthy, appropriate way is a sure sign of loving them!

10
Comments
© 2006-2020 LoveToKnow, Corp., except where otherwise noted. All Rights Reserved.
Resources, Advice & Tips for Covid-19
Read More
How to Discipline a Cat Effectively With Love