Watching a pair of cats playing with each other and wrestling can be truly adorable. However, if you're not used to cat behavior, it's possible to miss the signs that this play-fighting may be less than friendly and you need to intervene.

Signs Your Cats Are Playing or Fighting

It's perfectly normal to see cats tussling around your floor or chasing each other along the furniture and up a cat tree. Playtime is a healthy behavior for kittens and adult cats. Normal play behavior can include cats wrestling with each other, chasing each other and appearing to "jump and attack" each other, all of which are natural hunting behaviors expressed for sheer enjoyment. However sometimes play can escalate if one or both cats become over stimulated, or startled or you may see two cats fighting where it's clear they were aggressive with each other from the start.

Associated Applied Animal Behaviorist Katenna Jones says that sound is a good way to tell if cats are playing or fighting. "If it's quiet, it's most likely play. If there's growling, it's most likely not." If there's nothing other than the occasional meow or chirp, this means your cats are probably having fun. If you hear more stressed or aggressive sounds like yowls, hissing or screaming, you definitely have a fight on your hands.

If you observe stiff body language with ears back, this indicates the cats are stressed and not playing. Their fur will also be standing "straight up" rather than flat against their back and tail is up which is known as "piloerection." Their back will also be arched and their tails will either be pressed against them or moving in a fast, rapid and stiff motion. Their ears will also appear flat and back against their head and you may see teeth flared and claws out. The cat's pupils will also be dilated and the cats may engage in what looks like a starting contest. On the other hand, if their body language appears loose and in a normal, relaxed position, they are likely playing.

Another clear sign cats are playing is that they will "take turns" being the lead in wrestling or chasing games. They may also separate for a few seconds and then start up again. If you notice during play that one cat is always the chaser and wrestler, this may be a sign of concern, but if the other cat seems willing to engage then just keep an eye on them to make sure both cats are having fun. You know when cats are fighting because a cat that is involved in a fight will either continue fighting to defend itself or attempt to run away and hide to get free of the more aggressive cat.

Finally, it is very unlikely that two cats that do not know each other will play with each other. It's normal for cats within the same social group to enjoy playing but a cat is more likely to treat a cat new to them as a threat and at the very least get away from it, if not engage in fighting. Even a cat brand new to the household will be treated this way.

Cats Playing or Fighting With Humans

The same types of behavior cues for two cats or kittens fighting or playing can also be used when it's a human and a cat in the equation. If your cat has loose, relaxed body language with fur laying normally against his body and he is not hissing or growling, he is likely having a good time playing with you. On the other hand, if his body language is stiff, he is showing teeth and claws and growling and his fur is standing up along his back, this is a cat that is not happy with you and may become more aggressive if the situation is not addressed.

There is a type of "aggression" between cats and people that is often misinterpreted by cat owners. Younger cats and kittens can have a tendency to bite when playing with their owners, or during a grooming and cuddling session. There a few reasons for this. 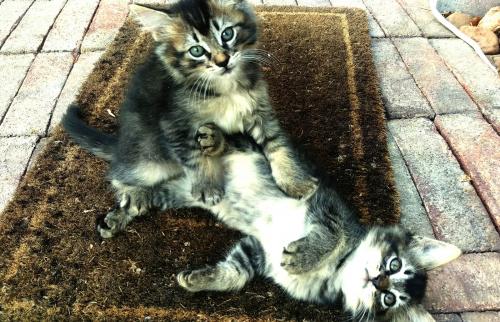 If your cat is biting you during play, avoid punishing the cat as this will only make your cat fearful of you and possibly aggressive. Calmly move the cat off by distracting them with a toy or a treat. Wand toys that move the cat further away from your hands are perfect for this task. Reward the cat for moving away from your hands with whatever he enjoys most such as treats, play or a brushing. Never pull your hands away from a cat that is play biting as this may overstimulate him and cause him to either bite and scratch more or bite down harder. Remember that your cat hasn't learned to play properly and it's your job to teach him gently what will give him rewards and which behaviors will not.

If it's clear to you that your cats are actually fighting, or a cat is directing aggression toward you, there are a few important rules to follow. Safety is key when dealing with aggressive cats as it's very easy to get clawed or bit yourself. 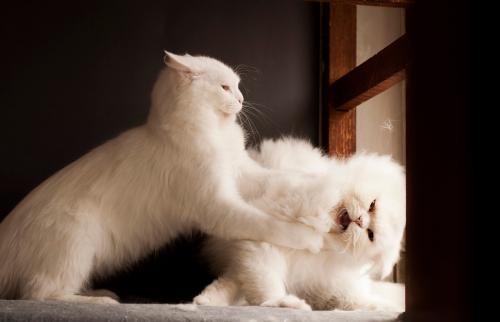 If you have any concern at all about your cats fighting, always supervise their interactions and intervene before a fight breaks out. This is safest for all concerned and will keep the cats and you from being injured.

Never stick your hands in between or around two cats that are fighting. The speed and intensity at which they are probably moving will almost inevitably end up with your hands getting scratched and/or bitten.

Make a loud noise to startle the cats to break them up, such as knocking two pots together, clapping your hands or saying "HEY!" in a loud, sharp tone. If you anticipate that a fight might happen, keep something on hand in your home that makes noise, like an air horn or a party noisemaker. Some cats will startle at the sound of a compressed air can commonly used to clean computers. Whatever you choose to use, do not continually use it but make a short, sharp noise that is strong enough to startle them both into stopping the fight.

Once the cats have separated you can throw a towel or blanket over one or both of them to split them up, or try to shoo one into another room or to a safe space like up a cat tree. You can also try to place a barrier between them such as a baby gate or a large sturdy couch pillow. Once the cats are separated it's best to continue their separation by keeping them in different rooms behind closed doors so they can cool off. 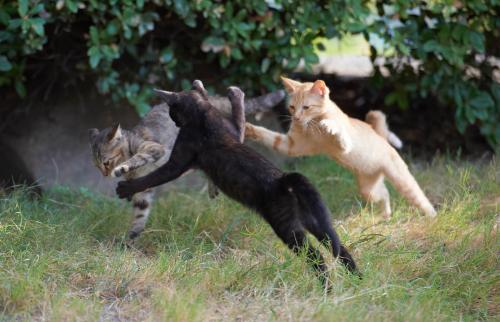 Dealing with fighting cats can be a very stressful and sometimes traumatic experience. It's natural to feel the need to punish them but avoid using any type of punishment. Your goal is to get the cats separated as quickly and as safely as possible. Punishment will only increase their negative associations with each other, and very possibly with you, and that will cause more damage to the behavior problem in the long run.

One mistake cat owners sometimes make is bringing a new cat into the household without considering the personality of the current cat. Personality and energy level are good determinants of how successful a cat matchup will be, even more than age. If your current cat is placid and quiet, he or she will not be happy with an active, playful kitten who wants to play constantly and fights can break out over the adult's stress and irritation. On the other hand, if you have a senior cat that still has lots of energy and loves to play, a kitten that will reciprocate might lead to lots of joyful play between the two. Make sure you take the current cat's needs for a companion into account as this will lead to less potential for fighting when a new cat enters the home.

If you've never seen cats play fighting before, it's understandable that you may become scared that they're "actually" fighting. Some cats can get quite enthusiastic during play fighting but as long as there's minimal noise and their body language looks normal, you can relax and enjoy seeing cats having fun with each other. Make sure you know the signs of aggression however so you can intervene quickly and safely if the cats truly are aggressive with you or each other.

2
Comments
© 2006-2020 LoveToKnow, Corp., except where otherwise noted. All Rights Reserved.
Resources, Advice & Tips for Covid-19
Read More
Signs That Show If My Cat Is Playing or Fighting