Bringing home a kitten doesn't always mean you'll know the kitten's birth date. Sometimes kittens that are adopted from shelters, found as strays, or received through means other than a breeder may have no known exact age.

Determining a Kitten's Age by Development

The best way to figure out the age of a kitten is to look at its physical and behavioral development. There are clear "milestones" that can be found in a kitten's growth that may not help you pin down the exact day of the birth but should help you figure out the likely week of their birth.

A kitten's eyes are a good indicator of their age.

Another clear indicator for early kitten development and age is watching their ears.

The growth of a kitten's teeth is also a good way to determine age.

Watching how a kitten interacts with their environment, assuming the kitten is healthy, can also give you clues to their age.

Determining a Kitten's Age by Weight

Another common method is to weigh the kitten. Realize that weights of kittens will vary by breed, so if you have a larger breed like a Maine Coon or a smaller breed like a Siamese, their weights will be a bit different from the averages listed here. It's a good idea to use the weight method in conjunction with looking at physical and behavioral characteristics, especially if you don't know the breed and their eventual average adult weight. 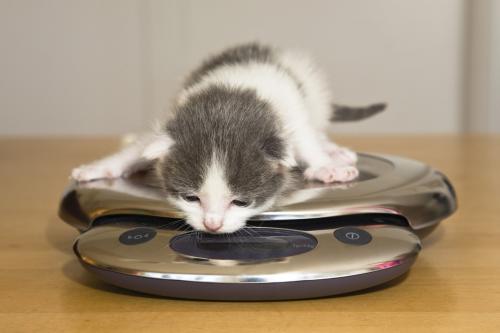 After eight weeks of age, a kitten will gain about one pound per month, so an average-size three-month-old kitten would be about three pounds, a four-month-old about four pounds, and so on.

Figuring Out Your Kitten's Age

It's important to determine your kitten's age to make sure you're giving them the proper health care and fulfilling their dietary needs. The best way to determine their age is to use a combination of these methods to come up with an estimate. Don't forget to bring your new feline friend in for his or her first veterinary visit and ask your veterinarian for help with deciding on your kitten's age.

1
Comments
© 2006-2020 LoveToKnow, Corp., except where otherwise noted. All Rights Reserved.
How Can You Tell the Age of a Kitten?