Grey is a color that can evoke an air of quiet mystery, introversion and stability. That makes it a perfect coat color for a cat who fits the subtle and enigmatic stereotype of the typical feline.

Grey Cats Are Not Rare

Grey, also called "blue," is not a rare color among cats and in fact it's a dilute version of black. In addition to solid grey cats, grey can be seen often with patterned cats such as tabbies, particolors, torties, calicos and more. It is true though that some cat breeds only come in grey, such as the Russian Blue, are harder to find which may lead to the belief that all grey cats are rare.

While cat lovers tend to have steadfast beliefs about how a cat's color affects their personality, there is no serious research that has demonstrated that's definitely the case. Although it's possible the level of melanin in a cat's pigment can affect their temperament, a cat's personality is more likely determined by their breed tendencies as well as their socialization and environment. Grey cats are often perceived as being more friendly, fun and playful than other breeds but your results with individual grey cats may vary widely.

There are a few cat breeds where solid grey can be found more often than others. If you have your heart set on finding a grey feline, these are the breeds you should check out first!

The American Shorthair cat has been in the U.S. since they first arrived as mousers on the Mayflower in 1620. These cats are athletic and muscular with a short, dense and "hard" coat. They are known for being outgoing, friendly and calm cats that aren't clingy and are great with older children and other pets. They are a playful breed that is known for being easy going although they do not love being handled. They are not the best cat if you or your children want a feline they can carry around. 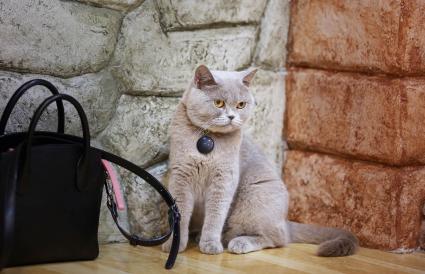 The British Shorthair is closely related to their American Shorthair cousin. Grey is actually the most popular color for this breed in the United Kingdom. The British Shorthair is a very laid back and affectionate cat that make pleasant companions. They have the same similar big round head of the American version but their body is a bit cobbier and they don't get as large overall. They also have the same thick, plush short coat. 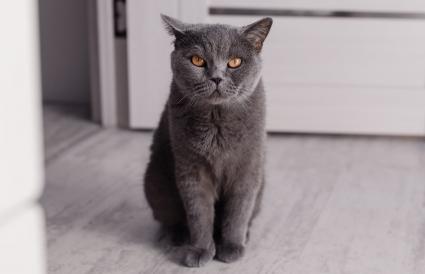 The National Cat of France, the Chartreux is a heavyset cat known as the "potato on toothpicks." They are muscular cat with a primitive body frame and thin legs. They only come in blue (grey) and they have a wooly medium-length double coat. The Chartreux is a quiet and affectionate cat that enjoys people but isn't overly clingy. Owners have described them as having a dog-like personality and they are a great cat for teaching tricks. They also have quite a prey drive and are excellent hunters. 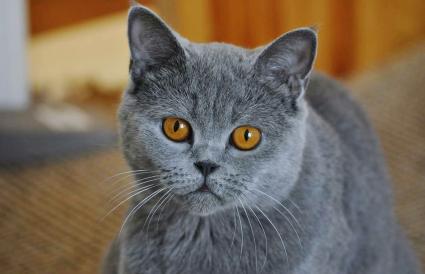 You'll never forget a Devon Rex once you've laid eyes on this unusual cat. They have large, bat-like ears, a pointed face, triangular head, large round eyes, lithe body shape and a curly coat. They are known as the "Pixie of the Cat Fancy" because they look like little forest elvish creatures. Their coat is made up of tiny, tight curls all over their body and they may be hairless in some areas. These cats are outgoing, active cats with silly personalities that make them a favorite with children and families who want a cat that's more dog-like than feline. 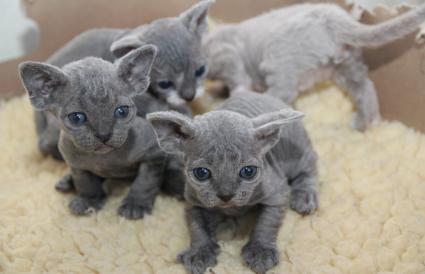 The Korat is a rare breed in the U.S. and hails from Thailand. They are one of the oldest cat breeds in existence today. They have a short coat that only comes in a blue-grey shaded with silver tips. The Korat has a shimmery effect to its coat as it moves and coupled with their emerald green eyes, they make stunningly beautiful cats. The Korat is known for being a quiet, calm cat that can be shy with strangers but affectionate with their humans. 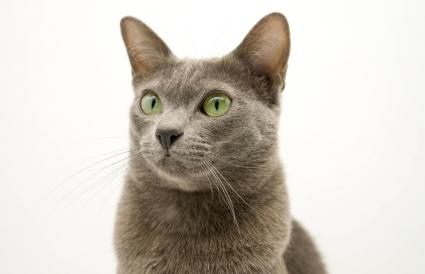 Another rare breed is the Nebelung which also comes only in a greyish-blue shade. The Nebelung has a "semi-foreign" build and weigh between five and 16 pounds. Their name means "creature of the mist" in German which is a perfect description for their silvery blue-grey long coat. Their long hair is luxurious and fluffy with a ruff around their neck and a plumed tail. These cats are known for being calm and quiet and they can be shy. They do best in calm households with older children, adults or seniors. 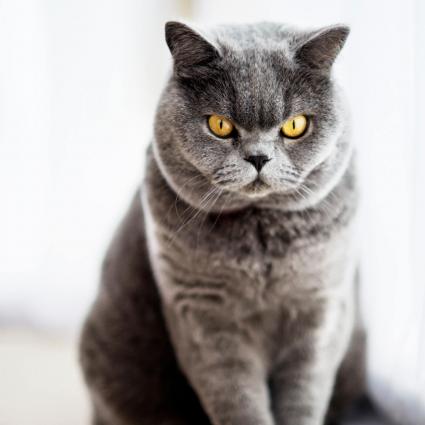 One of the largest domestic cat breeds, the Norwegian Forest Cat stands out for their long thick double coat. They resemble wild cats with the Lynx-like hair around their ears and the ruff around their neck. These cats are affectionately known as "Wedgies" and they adore people. They are moderately "talkative" and are excellent hunters and climbers. 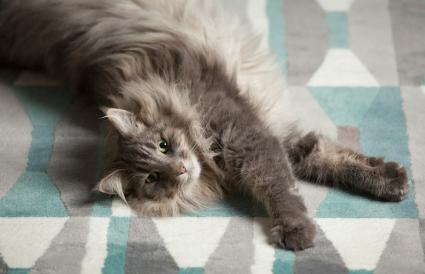 The Oriental is a shorthair cat closely related to the Siamese. While white tends to be the most popular color for Orientals, they also do come in a beautiful grey shade. The Oriental has a wedge-shaped face, large bat-like ears, and big almond-shaped eyes. Their bodies are long and angular. They have a very similar, vocal personality to the Siamese along with their intelligence and fixation on their people. These are great cats to teach tricks and it helps to exercise their active brains. They do not enjoy being alone and do best with another cat to keep them company or a cat-friendly pet like a dog. 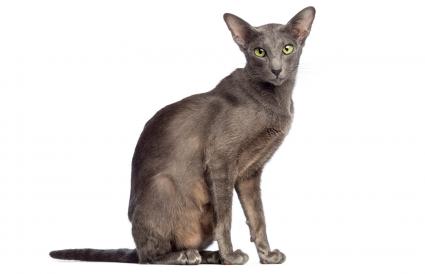 Blue Persians are a particularly gorgeous cat, with their lush, long fur. Persians come in either "doll face" or "Peke face" varieties, the latter having more of a flat face like a Pekingese dog. They have a stocky body and tend to be medium to large sized cats. The Persian is prized not just for their beauty but also for their sweet, gentle personalities. They are quiet cats that do enjoy being lap cats and can be playful in a low-key way. They do require a lot of grooming care so the Persian is definitely not a low maintenance cat. 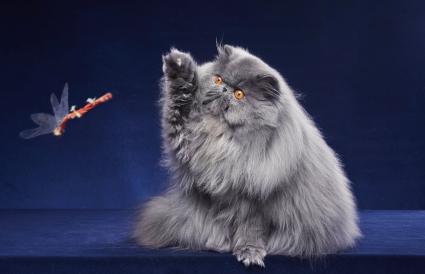 The Russian Blue is another breed that only comes in grey. They are the medium-haired version of the Nebelung, with a coat that's plush and stands on end because it's so thick. They also come with striking emerald green eyes. Like the Nebelung, the Russian Blue is a quieter cat that is affectionate with people it's comfortable with but is not outgoing with strangers. They also tend to fixate on one person in a home though they will be friendly to other household members. 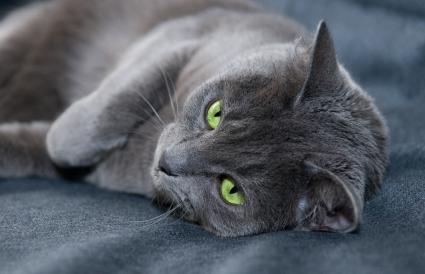 The Scottish Fold's most distinctive trait is their ears, which fold forward. They have big round eyes and a medium-sized body with a round, stocky appearance. The Scottish Fold can come in both short and long-haired versions. These cats are very vocal and love to talk, although they're not quite as loud as some other breeds. They're also very affectionate and engaging companions. 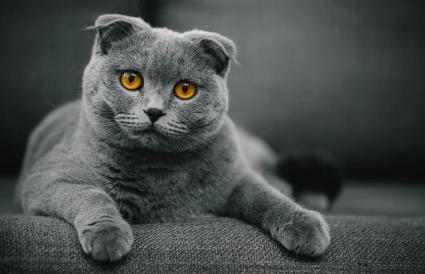 The Siberian is one of the largest domestic cat breeds, just behind the largest, the Maine Coon, in size. These cats are very playful and are a great breed to teach tricks to. They have a long, thick coat with three layers of fur designed to keep them warm during frigidly cold winters. The breed is known for being very friendly and outgoing. They're unfortunately rare in the United States however so it may take some work to find a kitten. 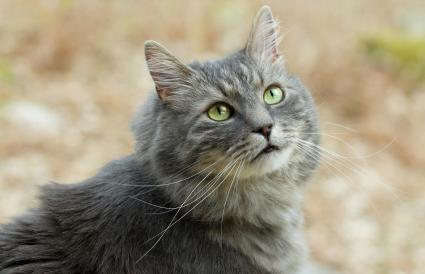 The Sphynx is a hairless breed, and even though they do not have a coat, they still do show colors on their skin. The Sphynx has a triangular head, large pointed ears and big eyes on a lithe, athletic body. Some may not be totally hairless with some soft small areas of fur around their ears and feet. The Sphynx is described as dog-like and they have effervescent, clownish personalities. If you are looking for a quiet lap cat, the Sphynx is not for you! They love people and are very fixated on them, and enjoy the company of other cats, pets and children. They do require a regular grooming routine though due to their specific skin needs, so make sure you are aware of the work involved before looking for a grey Sphynx kitten. 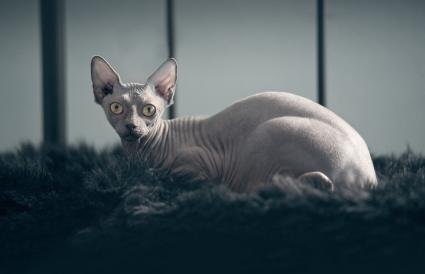 Choosing the Grey Cat of Your Dreams

If you're set on finding a grey (or blue) cat, there are obviously many breed choices for you. Make sure that the breed's general personality works with your lifestyle, and of course realize individual cats will still have their own quirks and temperament. You'll need to ensure that you're aware of your cat's grooming needs as well so you can keep their beautiful grey coat healthy throughout their lifetime.