Everyone who loves cats knows the friendly household felines are descended from much bigger and ferocious wild cats. It might surprise you to learn about breeds of domestic house cats that were deliberately bred to look just like smaller versions of these big cats. If you ever wanted a house cat that looks like a tiger, cheetah, leopard or other great wild feline, here are 14 breeds for you to fall in love with.

If you'd love to have a house cat that looks like a lion, the Abyssinian fits the bill. One of the oldest cat breeds known to man, these beautiful cats are small to medium-sized, weighing around six to 10 pounds. Their coat comes in four different colors although the red and ruddy shades are the most commonly known. You can also find them in blue and fawn and all of their coat colors have tabby ticking. Between their unusual coat, their stunning green or gold eyes and their lithe, muscular build, these cats evoke the picture of a lion roaming the savanna, albeit a very tiny one. 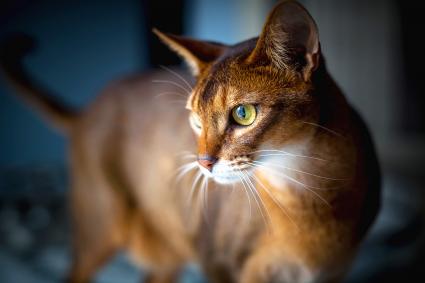 Some cat owners love the look of smaller North American wild cats and enjoy the idea of having a house cat that looks like a bobcat. The American Bobtail is an interesting breed because it truly does look like a wild bobcat. They have the short, bobbed tail, large powerful body and longer hind legs of a wild cat. However, they were actually created from breeding feral cats with naturally occurring bobtail mutations and not from actual bobcats at all. This breed can come in just about any color, but it's the tabby versions that truly make them appear to be small household bobcats. 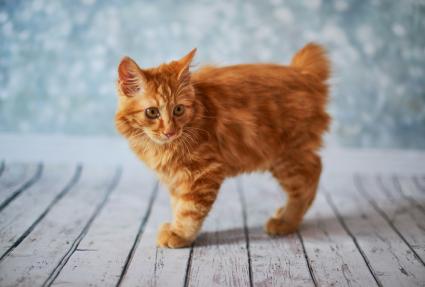 A domestic cat that looks like a tiger or an African wild cat, the Bengal is a popular hybrid cat that actually has wild cats as part of their breeding program. The Bengal was created from breeding Asian Leopard Cats and domestic breeds such as the Abyssinian, British Shorthair, Egyptian Mau, Bombay or Ocicat. Bengals are big cats, weighing from eight to 15 pounds. These cats act very much like small tigers in your home as well and they're not for the unmotivated or busy cat owner. They are highly intelligent and extremely active and need a lot of interaction and exercise to keep them happy. 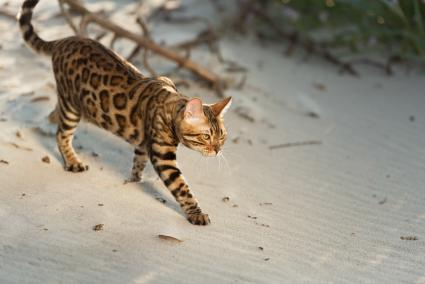 If a house cat that looks like a panther is more your style, the Bombay is an excellent choice. These sleek midnight black cats were bred to look specifically like small panthers. Despite their wild look, they're actually friendly and loving cats who would rather snuggle on your lap than hunt in the jungles. The Bombay was developed in the U.S. by breeding black American Shorthair cats to sable Burmese cats. They are medium-sized cats with muscular, sleek bodies and striking gold to copper eyes. Not only is their fur a deep black color, but their nose and paw pads are as well. 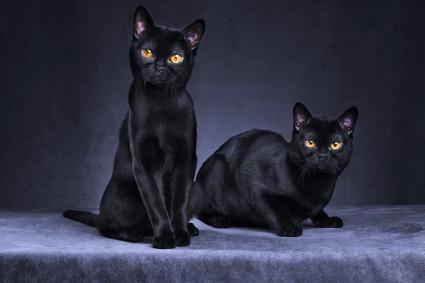 Another hybrid breed, the Chausie is definitely a domestic cat that looks like a lion, or perhaps a mountain lion or puma. This cat was created from breeding the Jungle Cat (felis chaus), which is native to South Asia and the Nile Valley with some domesticated cat breeds like the Abyssinian and the Oriental Shorthair. These are big cats that can weigh as much as 25 pounds and they have well-muscled bodies, long legs and an overall "wild" look to them. They also love water which is a trait they've taken from their wild ancestors. Chausies are known to be loving, playful cats that need a lot of care and attention and are not a good fit for the average cat owner who wants a more low-maintenance feline. 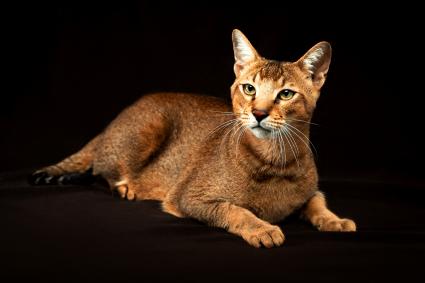 A cat with a delicious name, the Cheetoh is the pet of choice for someone who wants a house cat that looks like a cheetah. The Cheetoh was developed by breeding Bengals and Ocicats and it shares the same look as the Asian Leopard Cat that is an ancestor of all three breeds. They are big cats, weighing between 15 and 23 pounds and have an athletic build like other hybrids. Although they are known to be sweet cats, they do require a lot of interaction, exercise and enrichment to be happy and they can be fiercely intelligent. This is a great cat to have if you want to teach it to walk on a leash and go out with you, and you'll need to invest a lot of time in playing and exercising a Cheetoh to keep them happy. Or even better, have two so they can play and keep each other company when you need to go to work. 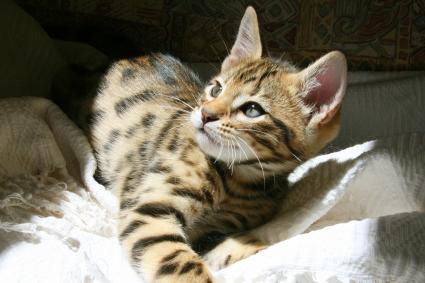 The Egyptian Mau is a truly stunning cat to behold. They also are one of the oldest cat breeds and are thought to be descended from the African Wild Cat native to Egypt. They are the only natural domesticated breed of cat that is spotted, which gives them the look of a wild cat like a Cheetah or Leopard. Their coat comes in either silver, bronze or smoke with the spotted pattern. They are small to medium cats, weighing between seven and 11 pounds and have an elegant, lithe and athletic body and their back legs are longer than their front legs. 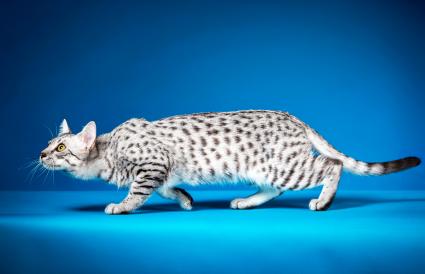 The Highlander cat is also known as the Highlander Shorthair or Highland Lynx. It was developed in the 2000s using the Desert Lynx and other domestic cats. These are large cats that look very much like their Lynx forebears, especially with their curled and tufted ears, a bobbed tail and the tabby coloring and patterns. They actually do come in most colors and patterns as well. The Highlander is known for having a silly personality. They're quite smart and active so they'd do best with an owner who wants to spend time training them to do fun things and keep them active and engaged. 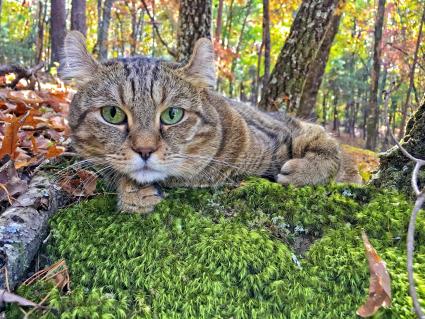 If you prefer a house cat that looks like an Ocelot or other small jungle cat, the Ocicat is worth a look. Known for their beautiful spotted coat, they definitely evoke the look of a small wild jungle cat lounging in your house. They actually were created by breeding Abyssinians, American Shorthair and Siamese cats. They are big cats with a muscular body built for athleticism and the do best in homes that have the time and energy for their personalities.They have been described as being dog-like and they absolutely adore their people. The Ocicat can be found in blue, blue silver, chocolate, chocolate silver, cinnamon, cinnamon-silver, ebony silver, fawn, fawn-silver, lavender, lavender silver, and tawny. They come with any of these base colors and any of the tabby patterns although spotted is the most sought after look. 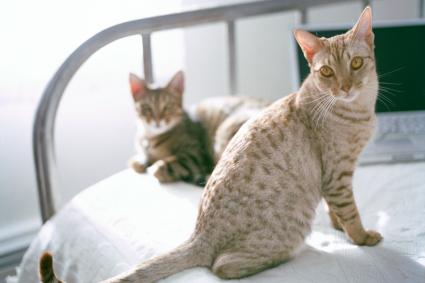 Another domesticated cat that looks like a bobcat, the Pixiebob is a friendly and sweet cat that has a dog-like personality. Although it is rumored to have actual Coastal Red Bobcat in its ancestry, the Pixiebob is actually has none. The Pixiebob was bred from tabbies with a naturally occurring bobbed tail. Despite having no actual Bobcat in their ancestry, they look very much like one living in your home. They are big, weighing from 14 to 18 pounds and they are stocky, thick cats that have a similar body and head shape to a Bobcat. Their coat can be short or long and comes in either spotted, rosette, classic or mackerel tabby patterns on a brown base that runs from tawny brown to a reddish-brown shade. 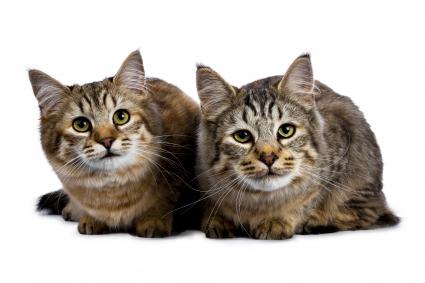 The Savannah is a house cat that looks like a Cheetah, although it was actually developed from the wild African Serval. These are big cats that hold the Guinness Record for tallest domestic cat. They weigh about 12 to 25 pounds and have long, slender and well-muscled bodies, very much approximating the look of a small size Cheetah. Their coat has a spotted pattern mixed with stripes and comes in black, brown, silver and smoke. Like other hybrids, they are described as being dog-like, highly intelligent and very active. The Savannah would do best in a home with someone who wants to put a lot of time and energy into training and playing with their cat. 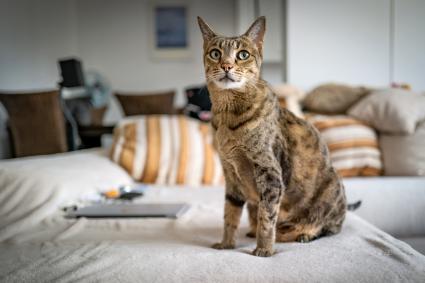 Another domestic cat that looks like a wild cat is the Serengeti. This breed was developed by breeding Oriental Shorthair and Bengal cats to create a cat that looks similar to the African Serval. They are medium-to-large sized cats weighing around eight to 15 pounds. The Serengeti has the typical athletic, "wild" build of other similar hybrid cats. They are known to be amazing athletes that will jump on anything they can in your home and cat trees, shelves and perches will be a "must" with this breed. Their coat comes in either a golden brown or silver spotted or striped tabby pattern. They also can come in solid black or black smoke. 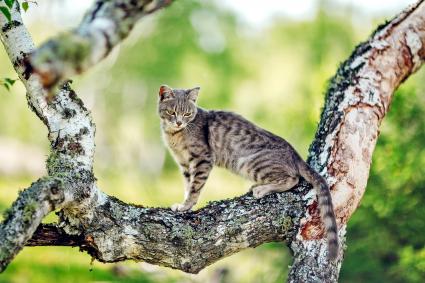 If you love the look and personality of the Abyssinian but prefer a long-haired cat, the Somali is an excellent choice. This breed was created as the long-hair alternative to the short-haired Abyssinian. Both breeds share the same personality traits, high intelligence, energy and drive. Due to the longer fur, the Somali sometimes looks like a shaggier lion or at a certain angle, a fluffy fox because of their bushy tail. 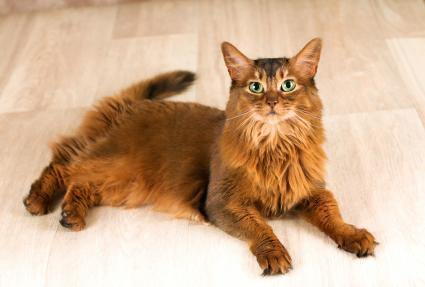 A Toyger is a house cat that looks just like a tiger, hence their name. They are a medium-sized breed that are known to be affectionate and social with people. The breed was developed by breeding striped shorthair domestic tabby cats with Bengals to deliberately produce a cat with the stripes and rosette markings found on the body and head of a tiger. Their base color is an orange-brown shade that changes to a whitish-brown color on the cat's belly. Its body shape is also tiger-like, with a muscular build, powerful hind legs, large paws and a long, supple body. They weigh around seven to 15 pounds. Although they're considered very intelligent, they also are known for being a more easy-going cat and don't have extreme exercise needs. 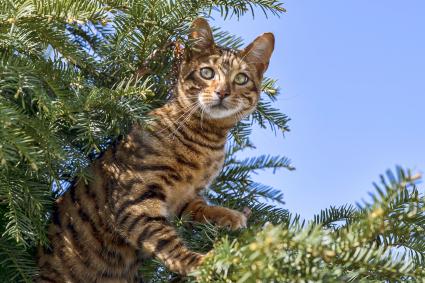 Looking for a Domestic Cat With a Wild Appearance

There are many options available today to find a house cat that can look like your own little tiger, lion or cheetah, among other types of wild felines. Some of these breeds are relatively new and harder to find and you should research them carefully before getting one. Especially for the breeds that do have actual wild cats in their heritage, be prepared for a cat companion that has a lot of smarts, energy and a mischievous streak if you don't spend enough time each day exercising and entertaining them.