If you're a fan of cats with unusual coats, consider the American Wirehair. This sweet and playful cat breed is often described as being wrapped in a coat like a soft and springy steel wool pad.

The Origin of the American Wirehair Cat

Like a lot of the other cat breeds with unusual fur, the coat of the American Wirehair developed as a natural mutation. The breed developed from farm cats in upstate New York in the late 1960s. A kitten from a litter had the unusual fur, and he was sold to a local breeder, Joan O'Shea, along with a female kitten from the litter with "regular" hair. The male, named Council Rock Farms Adams of Hi-Fi, and the female, Tip-Top, were bred to create more kittens with the wiry fur. American Shorthair cats were crossed with these cats to produce the breed eventually recognized by the Cat Fanciers' Association in 1978. The International Cat Association accepted the American Wirehair for championship status in 1979. 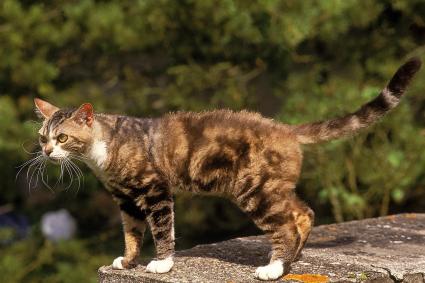 Coat and Grooming of the American Wirehair Cat

The American Wirehair's medium-length dense coat can feel coarse to the touch although depending on the individual cat some would describe it as feeling soft and springy. Their coat is made up of awn, down and guard hairs. If you examine the cat closely, you will see that each hair is individually curled, crimped, bent, hooked or kinked. Even the cat's whiskers will be crinkly. Not all kittens will have the curly fur and some kitten's fur may become less wiry as the cat reaches adulthood. The breed comes in most colors and patterns, including solid colors, bi-color and shaded, smoke, tabby, calico and tortoiseshell patterns. The coat is actually easy to care for as brushing or combing it can hurt the fur. They can develop problems with oily skin so baths a few times a year with special shampoos may be necessary to keep their skin healthy.

The American Wirehair is a gentle cat with a laid back disposition although they can have a silly, clownish side. They love people and cuddling and are a good choice for homes with children. They can be vocal, though not loudly, and are very smart. This is a breed that would definitely enjoy learning tricks and playing with you. They are social cats but they're not clingy and they can do well alone but would be happier with some type of regular company whether that's another cat or a cat-loving dog. They may not do well with other types of pets though as they are excellent hunters and may want to chase small pocket pets or birds.

The American Wirehair cat is a fairly healthy breed that does not have many known serious medical conditions to watch out for. Their average lifespan is about seven to 14 years. 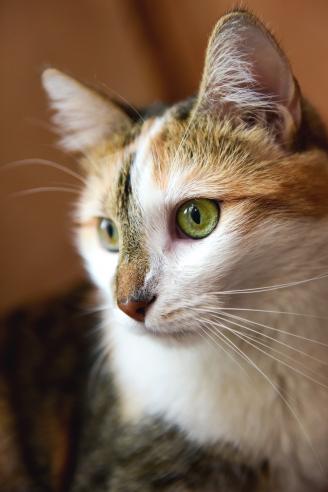 Getting an American Wirehair Cat

The American Wirehair is one of the rarest cats recognized by the major cat registries in the United States. Therefore finding a purebred kitten may involve long wait times for an available litter. A kitten costs around $800 to $1,200 although show lines can cost considerably more. Since they're so rare, finding one in rescue may be difficult, although breeders may know of cats that need to be rehomed. You can start a search for breeders on the directory page of the Cat Fanciers' Association and the breeder list for The International Cat Association.

This lovable breed has a relaxed, playful and intelligent temperament that makes them an excellent feline companion for just about any type of household. Their unusual coat is low maintenance and they're a relatively healthy breed. The downside to these cats is their rarity, so you may need to spend quite some time waiting to get one from a litter, or find an adult that is being retired from a breeding program.