Few cats are as lovely and graceful as the Balinese. Closely related to the Siamese, the Balinese shares their distinctive colorings with a personality all their own.

Origin of the Balinese Cat Breed

The Balinese cat is closely related to the Siamese, and it is believed to have come about as a natural mutation. The long-haired variety of the Siamese began to develop as its own breed in the 1950s by breeders Marion Dorsey, Sylvia Holland and Helen Smith. The breed was named by Helen Smith after the traditional dancers in Bali who are known for their exquisite movements and beautiful intricate costumes. The breed was recognized by the Cat Fanciers' Association in 1970 and the International Cat Association in 1979.

The Balinese looks very similar to a Siamese cat but they have long hair. Their body shape is the same with two varieties. The "modern" Balinese is long and lithe with big slanted blue eyes, a wedge-shaped head and pointed ears. The other is the "original apple-head" which has a rounder head, smaller pointed ears, round eyes and a cobbier body, Both types are athletic cats with a muscular build. Their tail is long and plumed. The modern type is a small to medium size cat and are about five to eight pounds. The original type is a bit bigger, weight between eight to 16 pounds. In both types the males tend to be bigger than the females. 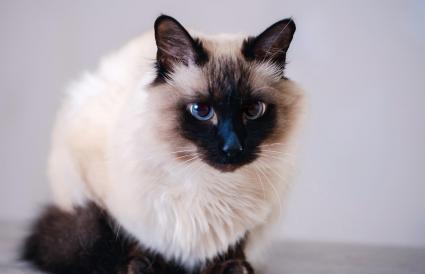 The Balinese has a longhair coat that is described as soft and silky to the touch. Their coloring is colorpoint like the Siamese, which means a cream-colored body with another color on the feet, tail, and face. Their colorpoint varieties are blue, chocolate, cinnamon, cream, fawn, lilac, lynx, red, seal, smoke, tabby, and tortoiseshell. Despite their longhair, they are a low maintenance cat and are low shedders. The modern Balinese does not possess an undercoat so they only need a few weekly combings to keep their hair healthy. The original version has an undercoat and much thicker fur. Like all cats they also need regular nail trimming, ear cleaning and dental care. Their fur is sensitive to the cold and may turn darker if exposed to drafts, which is known as feline acromelanism.

Is the Balinese Cat Hypoallergenic?

There are actually no cat breeds that are hypoallergenic, despite claims to the contrary. The Balinese produce the same type of dander as all cat breeds which causes human allergies. They may be a good option for mild allergy sufferers who still want a cat as they shed less than many other breeds. 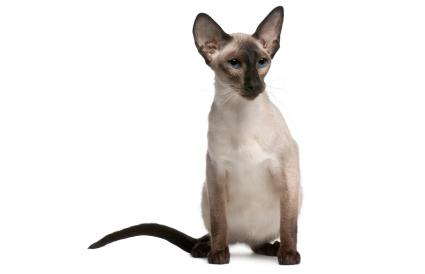 The Balinese shares many of the same personality traits as the Siamese, such as a strong bond with their owners. They are very social and do not do well if left alone for hours, so they would do best with another feline buddy or pet if that will be the case. They are also a vocal breed like their Siamese counterparts but they generally are not as demanding and enjoy a quieter form of "discussion" with you. Balinese also do well with children and make an excellent family cat.

Balinese cats are very intelligent and are a great cat for training different behaviors with a clicker. Their intelligence requires you to provide them with a lot of mental and physical enrichment, such as play time, interactive toys, cat trees and scratching posts, otherwise they will find ways to amuse themselves that you may not enjoy. They enjoy jumping and climbing and you will have trouble keeping them off the counters if they're not provided with cat-appropriate options. 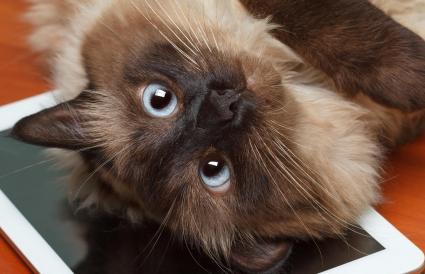 The average lifespan of the Balinese cat is about nine to 15 years, though some can live as long as 20 years. They are also like the Siamese in terms of the health conditions they tend to suffer from. If you own a Balinese, be on the lookout for:

Where Can You Get a Balinese Cat?

You can find breeders for Balinese cats through the Cat Fanciers' Association and The International Cat Association websites. Make sure that the breeders you contact provide health guarantees and do proper health screenings for their cats. The average cost for a Balinese purebred kitten is about $600 though show cats can be much more. 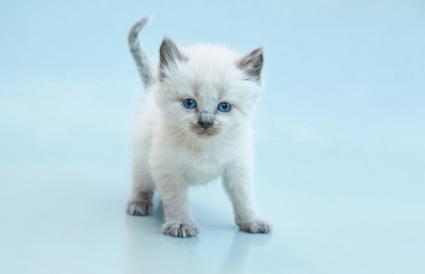 Balinese cats are hard to find in rescue but you can try looking for one through Petfinder and Adopt-a-Pet. There is also a national rescue network for Siamese and Balinese cats. Another good source of rescue cats is through contacting breeders who may have cats to retire. The Feline Breeder Retired Friends Facebook page is a good source of potential cats that need homes.

Is the Balinese Cat For You?

If you want an active, verbose feline companion who wants to be involved in your life at all times, the Balinese is a good choice. These cats are great for people who want an active cat that enjoys playing, training and having fun with their owners. They should also live with another cat or a cat friendly dog to keep them company when you're not home.