If you've ever thought it would be amazing to own a black panther, house-sized of course, then the Bombay is the feline for you. These sleek black cats were bred to emulate the look of a panther with a friendly, companionable temperament.

This breed was first developed in 1953 by Nikki Horner, a breeder in Louisville, Kentucky, who was looking to create a "parlor" panther resembling the great wild cats of India, hence the name. The breed was developed by combining black American Shorthair cats to sable Burmese cats. Despite the many references to black panthers surrounding the breed, there are no actual non-domestic large cats in its genetic makeup. The Bombay was recognized as an official breed in 1976 by CFA and in 1979 by TICA.

Bombay cats are medium-sized with athletic, well-muscled bodies. They have a round head with distinctive big round eyes and widespread roundish ears and a somewhat short snout. Their eyes are particularly striking and are called "new penny eyes" for their shape and gold to copper coloring. They weigh about six to 15 pounds, with males tending bigger than females. It's often said of the breed that they give the appearance of being a lighter cat before one picks them up and feels their true heft. 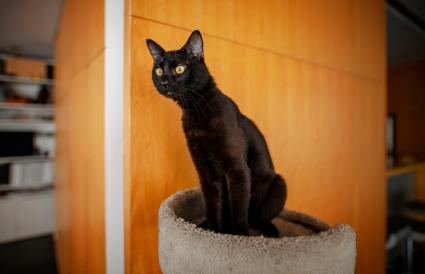 The Bombay cat only comes in a deep black color and this includes not only their fur but their paw pads and nose as well. Their coat is tight, short and should have a satiny sheen to it. There is nothing dull about a shiny Bombay black coat, which can also look like new leather, earning the cat the nickname "the patent leather kid" An interesting fact about the Bombay is that kittens are born with light tabby stripes but these disappear as the cat gets older. As far as grooming, their coat sheds minimally and all they need is a weekly brushing to keep their coat clean and healthy.

This is a breed that loves people and is an excellent choice for families with children. They are very affectionate and can be cuddly lap cats. They can be extroverted and outgoing and show no fear when meeting new people. Bombays are not quiet cats and can be very vocal about having "conversations" with their humans. They enjoy playing and are a fun breed to teach tricks and engage in interactive play. However, they also can be needy and won't do well if left alone for hours without companionship. Providing them with enrichment activities such as interactive toys, window perches and cat trees can help alleviate their loneliness, and they are known to do well with other pets too.

On average, a Bombay cat will live for about 12 to 16 years. They are not known for too many endemic problems other than:

Where Can You Get a Bombay Cat?

If you'd like to purchase a purebred Bombay kitten, you can expect to pay about $500 to $700 although cats from champion show lines can run as high as $2,000 or more. The best place to look for Bombay breeders is through the breeder directories on the Cat Fanciers' Association and The International Cat Association websites. 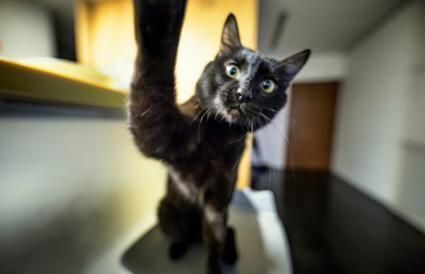 Since Bombay cats are a rarer breed, it may be harder to find them in rescue. You can search for Bombay cats at all-breed cat rescues and shelters through the Petfinder and Adopt-A-Pet websites. Keep in mind some black cats may be listed incorrectly as Bombays so you'll need to verify whether their breed identification is correct if you find one.

Is the Bombay Cat the Right Cat For You?

If you're craving the company of an outgoing, social and loving "mini" panther in your home, the Bombay is an excellent choice. They will need either mental and physical enrichment or companionship if left alone for many hours as they are "velcro" cats who can easily become lonely. This is a black cat breed that adores people and will be a true snuggling companion.