The Chartreux is a unique cat breed affectionately known as the "potato on toothpicks." These cats are easily identifiable by their round, heavy body shape and lovely blue fur.

The Chartreux is believed to have developed in Persia and migrated to Europe during the time of the Crusades. The cat breed is now considered the national cat France. Its name may come from Pile de Chartreux, a type of wool popular in Spain during the 1700s. There are some who believe that their name comes instead from the monks at the Grande Chartreuse Monastery in France who may have used these cats to keep their homes rodent-free. The breed almost disappeared during the second World War, but was rescued by breeders who crossed it with the British Shorthair, the Persian and Russian Blue breeds. The breed came to the United States in the 1970s and were recognized by the Cat Fanciers Association in 1987 and The International Cat Association in 1979.

The Chartreux has a thick, medium-sized body that can best be described as heavyset. It's also a body type known as "primitive." They are muscular cats that weigh up to 16 pounds. Their legs are somewhat short and thin and can make their body seem larger in comparison. They have a round head with big round eyes, erect ears and an expression that seems as if the cat is perpetually smiling.

Most cat breeds reach their full height and body weight around one year of age. Chartreux are distinct from other cat breeds in that they take three to five years to achieve their final adult size. Their long period between being a kitten and an adult is considered an extended adolescence. 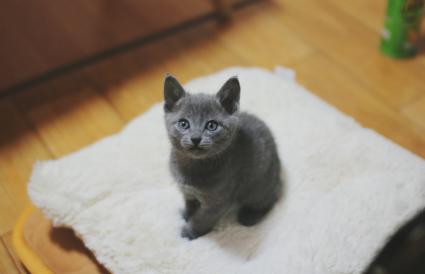 One of the distinguishing features of the Chartreux is their thick, woolly double coat that only comes in blue. The blue fur stands out even more against their large eyes which can be shades of copper to gold. The coat length is medium and should feel plush to the touch, although females' fur may feel lighter than males'. Their fur is easy to care for and only requires a weekly run through with your fingers or a comb to stay healthy. You do not want to use a brush with this breed as it will damage their undercoat. These cats will shed their fur several times during the year so you may need to do more upkeep during these times.

If you're seeking a pleasant companion who doesn't make a lot of noise or fuss, the Chartreux is the perfect cat. They are affectionate and enjoy people but are not overly dependent on them. They tend to be quiet cats and some have suggested this trait was bred into them by the French monks who didn't want noisy cats disturbing their peace. If they do make noise, they are more likely to make soft chirping or trilling noises rather than meows. They are known for enjoying play with toys, particularly ones that stimulate hunting behavior. They are considered dog-like and can be taught similar tricks such as coming when called, fetch, sit and more. Chartreux cats are easy going and can live happily with children, other cats and other types of pets, though they may have too much prey drive around small pocket pets and birds. 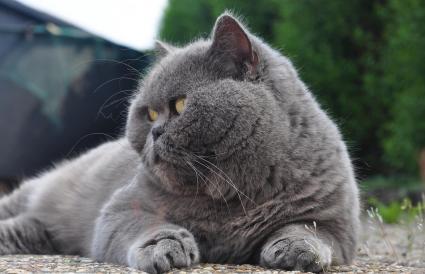 The Chartreux has a lifespan of around eight to 13 years. They are hardy cats who are prone to a few health issues including:

Where Can You Get a Chartreux Cat?

The Chartreux is a very rare breed in the United States. Though they are bred here, many U.S. breeders send their kittens to France in order to continue strengthening the breeding program of this cat that was begun after World War II. You can look for breeders on the CFA breeder directory and TICA websites. Because of their rarity they are extremely difficult to find in rescues and shelters, though you may be able to find a cat that needs to be rehomed through a Chartreux breeder. A Chartreux kitten will cost on average $1,000 to $1,500 though it's possible to find ones for much more depending on their bloodlines. 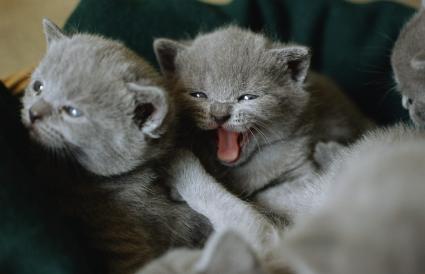 Breeders of the Chartreux uses a naming convention for their cats based on the year. All kittens born in a year will have their first name start with the same letter which means you can easily tell when a cat was born based on their name. The system does not allow the letters K, Q, W, X, Y and Z. A kitten born in 2019 would have a name starting with "P" and in 2020 with "R" and so on.

Is the Chartreux the Right Cat For You?

The Chartreux is a great choice for a home where you want an affectionate, laid back companion who can amuse him or herself just fine while you're out working for the day. They're a low maintenance cat who is a pleasant, quiet companion known for bonding closely to its people. However, if you have your heart set on a Chartreux, you will have to put a lot of time and finances toward getting one as they're very rare in the United States.