Fans of the Harry Potter series of books may picture the beloved character Dobby when they see a Dwelf. These tiny cats have many unusual features and an outgoing personality that will no doubt make you see them as a magical creature in your home.

The Dwelf cat is a mix of three breeds: the Sphynx, Munchkin and the American Curl. It's currently included in the Experimental category by the International Cat Association. However, this does not mean they are a recognized breed and the Dwelf's short history leaves many questions yet to be answered about health concerns and lifespan of this designer breed.

How Is a Dwelf Different From a Bambino?

Dwelfs and Bambinos have many similarities and it's easy to see how they can be mistaken for each other. The main difference is the addition of the American Curl bloodline into the Dwelf. This gives them the curled-back ears of the American Curl whereas a Bambino has "lynx-like" ears more like a common cat's.

The Dwelf looks very similar to a Bambino or the Sphynx with a few major differences. The Dwelf cat's ears are curled inward like that of the American Curl cat. Their ears are also rounder than the pointed ears you usually see on a cat. The Dwelf has the body of a Munchkin with short legs and the forelegs are shorter than the hind legs. The body also has a long concave appearance, almost like a Dachshund dog. Since the breed has not been around very long, it's difficult to give an exact estimate of their size but based on their Munchkin forebears you can expect them to be around five to nine pounds.

Dwelf cats are hairless and wrinkly, although some Dwelf's do have a very soft covering of hair that you'll notice when you pet them. Some Dwelfs also have a bit of hair on their tail and ear tips, paws and on their nose. They can come in any color or pattern which will be visible on their skin since they do not have fur. Dwelf cats require regular weekly baths with a gentle shampoo to keep them from developing an oily sheen.

The Dwelf has a similar personality to the Sphynx with a lively, affectionate and clownish attitude that makes many owners describe them as "dog-like." They love being around people and cuddling and as a result, they do not do well alone. If you work long hours, it's best to have another cat or animal companion for your Dwelf, and they are known to get along with other cats, dogs, and other pets. They also are good with children, although given the structure of their backs having them around small children who do not know how to handle animals properly is best avoided. Dwelfs are active, curious cats and you should have plenty of options for them to explore and play otherwise they can get themselves into trouble. 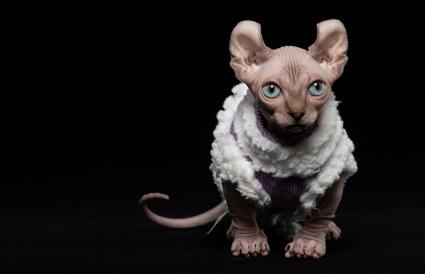 It's difficult to give an accurate reading on their expected lifespan as the breed has not been around very long. If you look at their Munchkin relative, the lifespan would likely be around 12 to 15 years. Since the breed does not have a long history, there is not an extensive review of typical health concerns, but based on their breed makeup and particularly their dwarf cat heritage, Dwelf owners should be on the lookout for:

Dwelf cats are very popular at the moment and prices for a kitten can run anywhere from $2,000 to $3,000 or more. Buyers should beware and do extensive research on breeders. At a minimum, look for breeders who do HCM screenings on their cats and require an interview from you and a contract before placing a cat. Since little concrete information is available yet on the breed's health and lifespan, be sure you're prepared to deal with unexpected medical issues as well as the likely problems inherited from the cat's Sphynx, Munchkin and American Curl parents. Dwelf cats are no doubt absolutely adorable with winning personalities, but a knowledgeable and prepared owner can give them the best home possible.