The elegant and graceful Javanese is a beautiful cat to behold. Despite their delicate appearance, these are cats that are playful, fun and very cuddly.

Origins of the Javanese Cat

The Javanese is also sometimes called the Mandarin or Oriental Longhair. In the 1950s through the 1970s, Colorpoint Shorthair breed was mixed with the Balinese, producing a cat that looked like the Balinese but with Siamese color points. The breed was named after the island of Java which is near Bali, but both breeds developed in the United States and have no other connection with the Indonesian islands. Under the Cat Fanciers' Association, the largest breed registry, the Javanese is considered a division of the Balinese based on their coat color. They were originally considered a separate breed by CFA in 1986 but the two were merged in 2008 under the Balinese name. The International Cat Association does not consider the Javanese a separate breed or even division of the Balinese and Javanese cats are registered simply as Balinese cats. So in short, all Javanese cats are considered Balinese cats, but not all Balinese cats are Javanese! 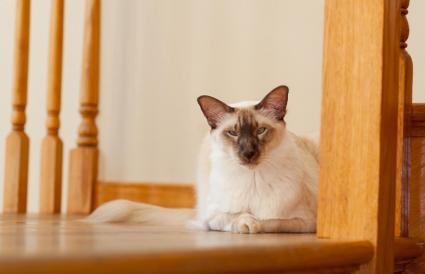 Other than coat length, the Javanese is almost identical to the Balinese cat. They have svelte, graceful bodies that are muscular and are incredible athletes. They have a wedge-shaped head with big pointed ears and almond-shaped eyes which is typical of many breeds derived from the Siamese. They tend to have green or blue eyes, though other colors and odd-eyes are possible. Their hind legs are a bit longer than their front legs. One of their most distinguishing features is their long feathery plumed tail. They are a medium-size cat that ranges from five to nine pounds and males are usually bigger than females.

The Javanese cat has a medium-length silky coat that comes in solid color points, lynx points, and parti-color points. For comparison, the Balinese under the CFA rules has either a blue, chocolate, lilac or seal point color. The Javanese point colors include:

The Javanese coat does not have an undercoat and they are very low maintenance. They will enjoy a regular combing but don't need to do much as their coats will not form mats. Some people consider the Javanese hypoallergenic because of their light hair and no undercoat although no cat can be truly hypoallergenic. The Javanese also can take some time to develop their coat and kittens may not show their full coat and plumed tail until they are eight months or more. 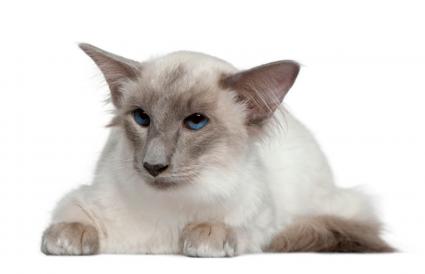 Personality of the Javanese Cat

Like the Balinese, as well as all Siamese-related breeds, the Javanese is a cat that is very focused on its people. They are very affectionate and loving and crave company. This is a cat that will not do well if left alone for hours, so they need the company of another cat or other cat-friendly pets. They will follow you from room to room when you are home and they have the same vocal personalities as the Siamese, though they're not quite as loud. They are also very athletic and energetic cats and they love playing and jumping. This is a perfect breed to acclimate to a leash and harness and take on walks, and to teach tricks with a clicker. Having lots of cat trees and shelves for them to jump on will also help to exercise their need to move about and play.

The average lifespan of the Javanese is about eight to 12 years. The Javanese has a few health conditions that are common to the breed. These include: 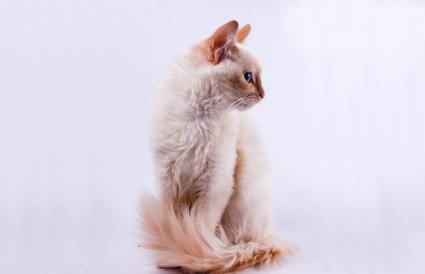 The Javanese cat is one of the rarer breeds of cats in the United States. You can expect to pay around $600 to $900 for a kitten from a breeder, or more if the cat is from show quality lines. They are not easy to find in rescue since they are so rare, but if you want to adopt one, the best place to start would be contacting breeders who may have cats they wish to retire and place in a pet home. They may also know of Javanese owners who have a cat they need to find a new home for. You can look for breeders through the CFA website's breeder directory and TICA's directory although you will have to search under "Balinese" to find them.

Getting a Javanese Cat Companion

The Javanese is a beautiful, elegant feline that will grace any household with their presence. These are definitely cats for people who want an involved relationship and are ready and willing to spend lots of time cuddling, playing and training their kitty. If you prefer a more sedate lap cat that is quiet and calm, the Javanese is definitely not the cat for you!