If you're old enough to remember the hair trends from the 1980s, you'll instantly understand where the LaPerm gets their name from. This sweet and friendly cat breed's distinctive feature is their curly, rippled hair.

History of the LaPerm Cat

The LaPerm is the result of a natural mutation that persisted for 10 years before the first LaPerm's owner realized she had something special on her hands. The first cat born in 1982, Curly, was a short-haired domestic cat living and working on a farm in Oregon. Curly produced several litters with kittens having the same unusual coat and eventually her owner began a breeding program to produce cats with the mutation. Eventually, the breed was recognized by The International Cat Association in 2002 and the Cat Fanciers Association in 2008.

Physical Characteristics of the LaPerm Cat

The LaPerm cat is on the small-to-medium side, weighing on average five to 10 pounds when fully grown. They have a wedge-shaped head, big cupped ears and large almond-shaped eyes. They may also have hair around their ears like a Lynx. Their body is well proportioned and muscular, with hind legs that may be a bit higher than their front legs. They will also have a plumed tail if they are long-haired or a bottlebrush tail for short-hair cats. They take about two to three years to become mature adults.

The LaPerm is a rex breed, which is a cat that has a mutation that produces a coat that may be curly, wavy or rippled. Other rex breeds are the Selkirk Rex, Cornish Rex and Devon Rex. The coat can be a mixture of loose curls and waves or one or the other. The curls tend to be tighter around their throat, underbelly and by the ears. Some kittens may be born completely bald or with straight "normal" fur. Their curly hair will grow in by the time they reach full maturity. Some LaPerm cats may molt their coat during their lifetime, or after sterilization. The breed comes in both short and long hair varieties and can come in every color and pattern. Tortoiseshell, tabby pattern and red colors appear to happen more often in the breed than any other.

Despite the unusual look of their fur, LaPerms are actually easy cats to care for. Shorthair LaPerms should be combed a few times a week and longhair LaPerms will need combing several times a week. This will keep the hair mat-free. This breed doesn't shed a lot and if they start to, you can add in a weekly gentle brushing to your grooming routine. Other than regular nail trims and teeth cleanings, the LaPerm does not require any difficult grooming tasks. It's important to note, if you decide to bathe your LaPerm, allow their hair to dry naturally as a hair dryer can make the fur frizzy. 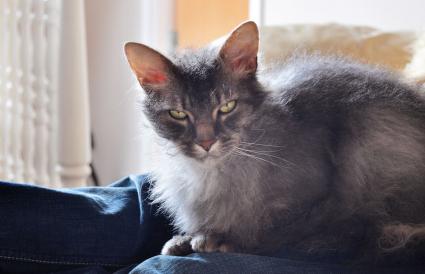 Because of their unusual coat, some cat owners believe that the LaPerm is hypoallergenic. However, there is no cat breed that is truly hypoallergenic. LaPerms have the same dander that cats produce that afflict people with allergies. While individual allergy sufferers may do better with a LaPerm than another breed, if this is a concern you should interact with the cat first to see if your allergies are exacerbated by them or not before committing to taking a LaPerm home.

LaPerms are known for being intelligent, quiet and easygoing cats that are loving and affectionate without being clingy. Since they developed from working barn cats, they do enjoy hunting and will love playing with toys that excite their play drive. They are active cats but not excessively so and if you give them toys, scratching posts and cat trees, they are capable of amusing themselves when you can't focus on them one-on-one. Some owners have described them as being "dog-like." They are known to do well with children of all ages, and other pets. They can be curious cats and training them to do tricks is a fun way to engage their agile minds. 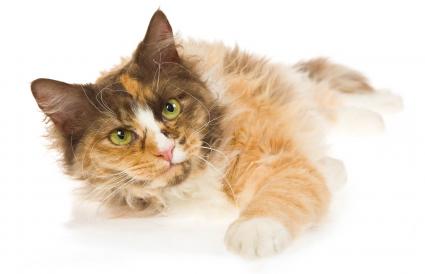 Getting a LaPerm Cat

A purebred LaPerm kitten can cost from about $900 to $1,200. Kittens from championship show lines may cost a bit more. You can find breeders through the Cat Fanciers' Association directory and on the website of The International Cat Association.

Currently there is no LaPerm-specific rescue group in the United States. You can contact LaPerm breeders who may have adults who need to be placed in new homes. You can also search for the breed in all-breed rescues and public shelters near you using the Petfinder and Adopt-a-Pet websites.

Is a LaPerm the Right Cat For You?

The LaPerm is a terrific choice for any home that loves cats and wants an adaptable, affable feline that's low maintenance. They do need some regular grooming but nothing that would be complicated for even a beginning cat owner. They have outgoing personalities and enjoy cuddling on your lap but don't have the neediness of some other breeds. They're also quite intelligent and are a great choice for an owner who wants a cat to clicker train.