The "werewolf" cat, or the Lykoi, is a breed like no other! These cats truly look like the original Wolf Man although they're actually sweet and loving felines. Their name comes from the Greek word for "wolf."

The Origin of the Lykoi Cat

The unique fur of the Lykoi is due to a naturally occurring mutation that arises in shorthair cats. Two separate sets of kittens were found with the mutation, one in Virginia and one in Tennessee in 2010. They were brought to a veterinarian, Dr. Johnny Gobble, who performed a series of genetic and medical tests on the kittens to ensure they were healthy, shared the same gene for their coat and were not related to the Sphynx or Devon Rex breeds. Dr. Gobble was fascinated by the cats and began to develop the breed with his wife Brittney in 2011. They are currently recognized as an "experimental breed" by the International Cat Association and in 2018 were allowed Misc Status to show in the Cat Fanciers' Association.

The same natural mutation that is found with the Lykois in the original breeding program was also found with several feral cats around the U.S. These cats were brought to the breeding program, as well as domestic shorthair black cats, to create a breed that is genetically and physically healthy. They chose black cats as the black roan type is the most popular and is considered the breed standard by CFA, but more colors are being added.

The Lykoi is a medium-sized cat weighing between four to seven pounds. They have lean, athletic bodies with pointed, large ears. Their bodies are longer than their tails as well.

The most distinctive feature of the Lykoi is their coat. They are considered a partially hairless breed, with some Lykoi having fur all over, aside from areas on their faces, and others fully hairless. They have a facial "mask" which means they tend to not have hair around their eyes, nose, ears, muzzle, and chin as well as on their paws and legs. Even for those cats with a lot of hair, it is still not as thick as in other types of cats and though it looks thin and coarse, it actually has a silky texture. They lack an undercoat, like other cat breeds, and they are the only cat you can stroke back and forth against their fur without disturbing them. They come in short and medium hair lengths. 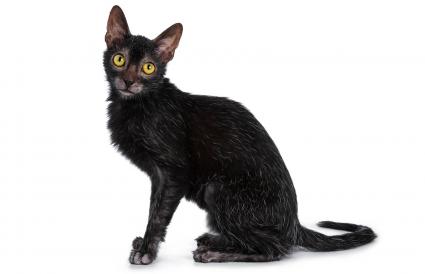 Roan is a pattern where white is mixed evenly throughout a cat's fur with another color. The Lykoi cat's most common color is black roan. Some Lykoi cats will appear a silvery color if there's a higher ratio of white to black hair. Lykois are also known for having pink skin which can become almost black if they spend too much time in the sunlight. Lykoi kittens are actually born completely black and the roan pattern will slowly begin to appear over the next few weeks post-birth.

How much you need to groom a Lykoi will depend on their level of hairlessness. Like a Sphynx cat, you will need to keep hairless areas clean with regular baths, otherwise they will become oily. They are heavy shedders and will molt their fur at least once or more each year. 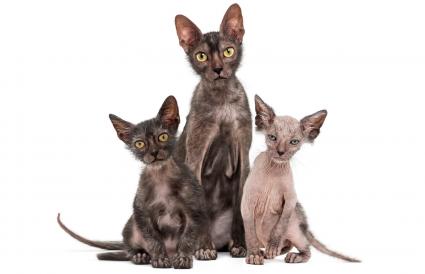 There is no cat breed that can be considered truly hypoallergenic, as the allergens that affect people come from the cat's dander and not their fur. Lykois are not only not hypoallergenic, they are also heavy shedders.

Lykois have been described as "dog like" and enjoy interacting with people, other cats and dogs. Their fierce intelligence and hunting behavior may be related to their feral cat ancestry. In fact it's been observed that a group of Lykoi cats together will hunt like a pack which is unusual behavior for felines who are generally solitary hunters. While they can be affectionate and loving, they are not docile lap cats and will need a lot of enrichment and play time to keep their minds occupied. Lykois tend to do fine on their own and will play with toys so as long as they are provided with activities, they can tolerate alone-time more than other breeds. They are known to be initially shy with strangers and can seem almost protective of their owners and home. 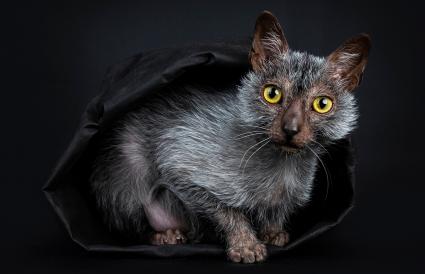 Since the Lykoi is a newer breed, it's difficult to approximate their average lifespan. Cats from the first breeding litter would still be alive today. They also have not been around long enough to establish a history of specific medical conditions. However, some health concerns are:

Where Can You Get a Lykoi Cat?

Since Lykois are a very new breed and relatively rare, a purebred kitten can be quite expensive. You can expect to pay around $1,500 to $2,500 for a kitten. You should also expect to be put on a waiting list since there are so few kittens currently available. You can find breeders through the websites for The International Cat Association and the Cat Fanciers' Association. Rescuing a Lykoi is unlikely due to their newness and rarity but you may be able to find breeders looking to retire a cat. 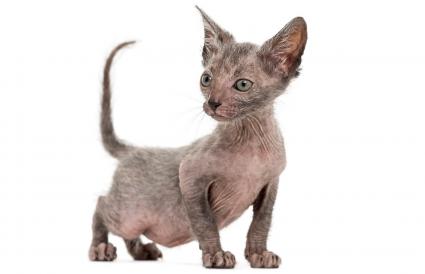 Is the Lykoi Cat the Right Cat For You?

If you have your heart set on a Lykoi cat, be prepared to wait as they are still quite rare, and kittens are expensive. These cats require a home with a lot of activity and engagement, as well as options for solitary enrichment like interactive toys, cat trees, scratching posts and even other Lykoi cats. They also need an owner who will keep them indoors and care for their fur and skin needs. Finally if you want a breed where you can prepare for future health concerns, you may want to avoid the Lykoi as they are too new at present to establish a health history for potential owners.