The Nebelung cat is a rare breed who derives its name from a Germanic poem that was the basis for the famous Wagnerian opera, The Ring of the Nibelung. Like the epic masterpiece, this cat is one sure to make an impression on anyone it meets.

The Origins of the Nebelung Cat

The Nebelung was first developed in the 1980s by breeder Cora Cobb. The first two Nebelungs registered with The International Cat Association in 1987 were a male, Siegfried, and a female, Brunhilde, who were named after characters in the Nibelungenlied. Both cats had long blue hair and were born to separate litters with a black domestic shorthair and a black longhair cat. These two blue cats were bred together to create the Nebelung breed, which also had some outcrossing of Russian Blue cats as well. The breed was accepted for championship status by TICA in 1997. The breed is also recognized by the World Cat Federation and American Cat Fanciers Association among others, but is not yet accepted by the largest U.S. registry, the Cat Fanciers Association.

The Nebelung has a muscular and athletic build, similar to that of the Russian Blue. Their body type is "semi-foreign" which means it's the middle ground between slender cats like the Sphynx and cobby cats like the British Shorthair. They have large oval eyes on a wedge-shaped face and big pointed ears. Their eyes range from green to yellow. The Nebelung is a medium-size cat that weighs between five and 16 pounds. 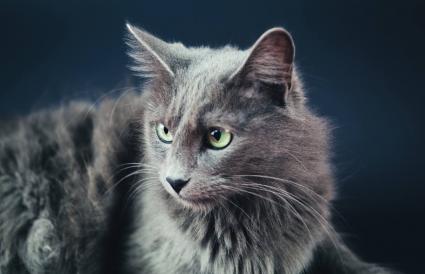 The Nebelung's name means "creature of the mist" in German and it's easy to see where the name came from when you look at their coat. These cats have a blue coat with a silvery sheen at the ends of their fur. They are a long-haired breed with the hair extending throughout the body to the end of the tail. The hair on the tail is even longer than the body hair which creates a luxurious plumed effect. They may have a ruff around their neck area which is more often found with males. They also have long hair by their ears and back legs and in their toes. The Nebelung coat is a double coat with a soft, satiny feel to it.

Because of their fine hair, they are not as prone to mats as other breeds but they will still need regular care to keep them mat-free. A good brushing and combing at least twice a week can keep their skin and fur healthy and clean. 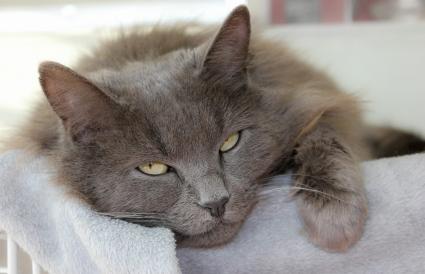 Personality of the Nebelung Cat

The Nebelung is a quiet, gentle cat that can be quite shy around strangers or lots of activity. They are affectionate with their owners and are definitely a lap cat. They can do well with another cat or dog that has a similar temperament but may become fearful and anxious around a more active and energetic cat or dog. These cats are a good choice for quiet households, such as with older adults and senior citizens, or a family with older children. Because of their shy nature, Nebelungs should definitely be an indoor-only cat. Like all cats, they can be trained to do different behaviors, but you may need to move a bit slower as they are shyer than some other breeds.

Health Concerns of the Nebelung Cat

Nebelungs are still a fairly new breed so their average lifespan isn't definite, but current specimens of the breed have lived for around 11 to 16 years. They aren't known for any serious health conditions so far, although they can be prone to obesity if their diet isn't managed properly. 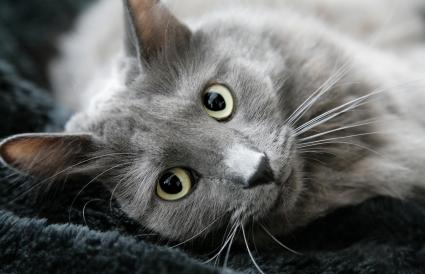 Where Can You Get a Nebelung Cat?

Nebelungs are a rare cat in the United States and finding a cat from a breeder can be difficult. This is even more so the case if you're looking for a rescue. You can try to find breeders through The International Cat Association and the American Cat Fanciers Association. A purebred Nebelung kitten will cost around $300 to $600 on average.

Is the Nebelung the Right Cat For You?

Nebelungs are beautiful cats and sweet, calm feline companions. They are, however, quite rare so finding a Nebelung may take a lot of effort and a long wait. Nebelungs are excellent choices for quiet households that want a devoted lap cat who won't be stressed by many changes and excessive activity in the home.