White cats are thought to be lucky in many cultures and desirable as pets. Not all breeds can have an all-white coat and solid white cats are about five percent of the cat total cat population. If you are sure you want a snow white feline, there are a few breeds you'll have to focus on.

The American Curl is a unique-looking cat that has only been around since the 1980s. These cats are medium-sized and come in short and long-haired varieties. Their standout feature is their ears, which fold curl backwards. Their ears are also surrounded by fur like a wild cat and they have a long body and plumed tail. 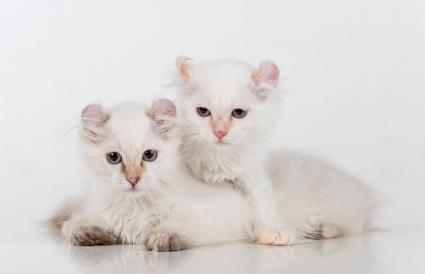 The American Shorthair has been in the U.S. since the arrival of the Mayflower in 1620. They are a medium to large size cat with a big round head and large eyes to match. They are muscular cats with a known propensity for being an excellent hunter. They have short, hard, dense fur and although their most popular color is silver tabby, the pure white American Shorthair is a stunning cat. 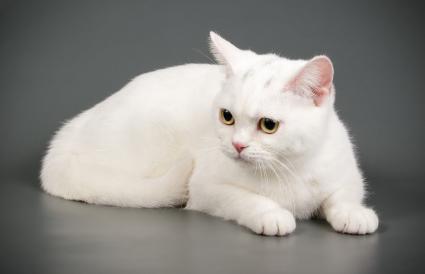 The British Shorthair is similar to their American Shorthair cousin, but they are smaller and cobbier. They also are not as outgoing and can be more reserved. Like the American Shorthair, their most popular color is not white, but instead blue. However, a solid white British Shorthair is a beautiful stout cat with fur that feels plush like a stuffed animal. The white color also stands out against their big eyes which can be blue, green, gold or copper. 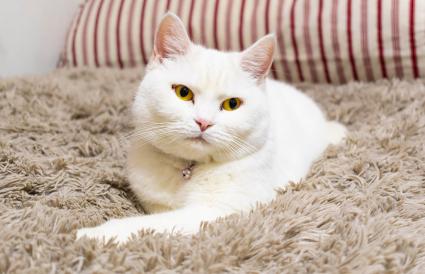 The Cornish Rex is an interesting breed that can be harder to find. They have an unusual short curled coat and a long, slinky body and tail with big tapered ears and round eyes. Their coat is very soft and many allergy sufferers prefer this breed. Although they are not hypoallergenic, they do shed less than other cats because they lack the traditional coats that cats have. They are very active, intelligent cats with a playful and outgoing personality. The Cornish Rex is a smaller to medium size cat weighing between six and 10 pounds. 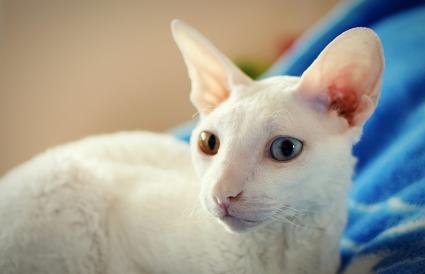 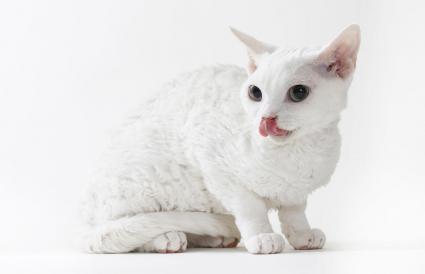 A medium-to-large cat, the European Shorthair weighs around 12 to 15 pounds. They are rare in the U.S. but easily found throughout Europe. In fact it's the national cat of Finland. They are believed to be descended from the cats owned by the Romans which eventually interbred with feral European cats as the Romans moved into Europe. They are well-muscled cats with a round head and short face and short hair without an undercoat. They are a low-maintenance cat who enjoys being with people as well as hunting and playing. 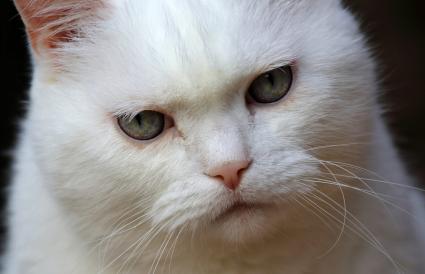 The Exotic Shorthair is a short-haired version of the popular Persian cat. Instead of the long, silky coat of the Persian, the Exotic Shorthair's coat is dense and plush like a child's stuffed animal. Their heads follow the show version of the Persian with a flat rather than "doll" face. They are friendly and calm like the Persian, although they can be a bit more energetic. They are a great choice if you love the Persian personality but prefer to avoid dealing with a lot of grooming and maintenance. They are a medium-to-large size breed that can weigh between 10 to 20 pounds. 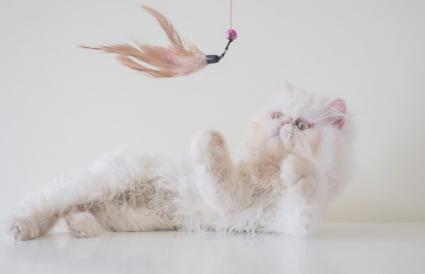 In their native Japan, the Japanese Bobtail is considered a good luck cat. Homes and businesses have statutes of the maneki-neko, or lucky cat, which is based on the breed. Their distinctive feature is their short, bobbed tail. They can come in short and long hair varieties and the breed is medium-sized. They are an outgoing, friendly and active breed that has been around for centuries.

The official cat of the state of Maine, this breed has been in the U.S. since the 1800s. They are the largest domesticated cat breed, weighing up to 18 pounds. They are known for their beautiful long, shaggy coat and fluffy tail. Their fur is designed to keep them warm in the cold winters. They are excellent hunting cats, having been developed at first as mousers on ships and farms. They are known for their intelligent, engaging personalities and a "dog-like" temperament. 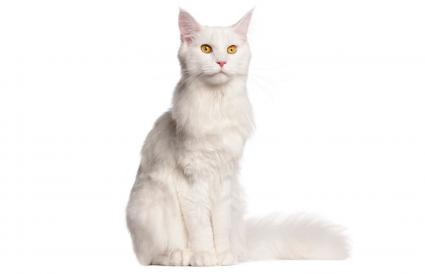 The Munchkin is the "Dachshund" of the cat world. They have short legs, the result of a natural genetic mutation. They are a small breed, weighing around five to nine pounds. The Munchkin comes in short and long hair varieties. They are affectionate, social cats that love to play and their short legs don't appear to slow them down or limit their jumping ability. 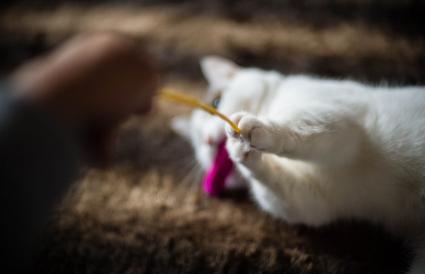 The Oriental cat is related to the Siamese and white Oriental cats have specific standards compared to other colors and patterns in the breed. The white Orientals are known as "Foreign Whites" and in the United Kingdom, they cannot be bred to other Oriental cats. In the U.S. white Orientals can be bred to other Orientals but breeders must be careful to avoid the possibility of developing kittens with deafness. The Oriental has a personality very similar to the Siamese, with a vocal, talkative nature and a strong desire to bond with people. They are also very intelligent and excel at learning tricks and training. They have distinctive wedge-shaped heads with big, triangular ears and an angular body. 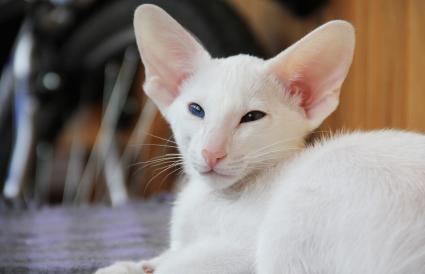 Persians are one of the most popular breeds of cats. They have beautiful, silky long coats on a stocky body that is medium to large sized. They can be either show Persians with a flatter face or "doll face" Persians with a longer muzzle and nose. Despite their royal appearance, they are sweet, gentle cats that enjoy cuddling and lounging. They can be playful however, especially as kittens. A white Persian is a symbol of elegance and luxury and it's a popular color. White Persians can have copper or blue eyes, or they can have "odd eyes" which means one blue and one copper eye. 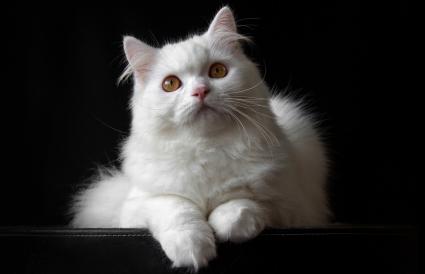 This breed is thought to be the progenitor of the Maine Coon breed. They hail from Norway and have the same thick weatherproof coat of the Maine Coon but they're smaller. The Norwegian Forest Cat gives the appearance of a wild cat with their tufts of hair around the ears like a Lynx. The breed is affectionately known as a "wedgie" and they have loving, outgoing personalities. They also love climbing and hunting and do best with lots of cat trees to play on. 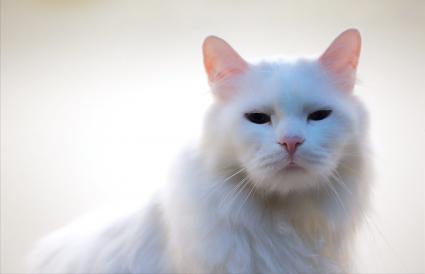 The Russian White is a rare breed that was developed in Australia in the 1970s. The breed was created by crossing a Russian Blue to a white Siberian in order to create a cat with the Russian Blue's personality and physical traits but with a white coat. The breed won championship status from the Cat Fanciers' Association in 2010. Like its blue counterpart, the Russian White is a cat with a dense double coat and is medium-sized, weighing on average 12 pounds. They are friendly, affectionate cats with their people but may be aloof with strangers.

These adorable cats are known for their ears that are folded inward and their big round eyes and head. The original Scottish Fold, a cat named Susie, was actually a white cat. The breed is medium-sized with a round body to match their round head. They can be short or long haired and both versions have full, thick coats. They are vocal cats with loving, engaging personalities. 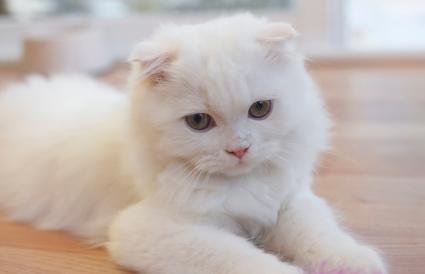 The Siberian is similar in look to the Maine Coon and Norwegian Forest Cat. They are one of the largest domesticated cat breeds. The breed developed in Russia and came to the U.S. in the late 1800s. They excel as hunters and are prized for their intelligent, dog-like personality. Although no breed is hypoallergenic, the Siberian is considered a good breed for allergy sufferers because they produce less of the allergy-causing Fel d 1 substance than other cat breeds. Their fur is thick and has three layers to help them stay warm during cold winter weather. 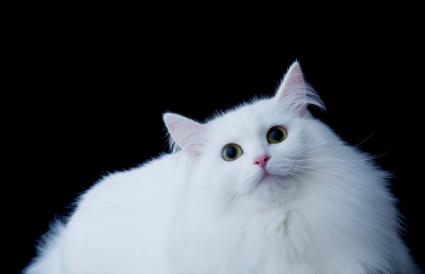 The Sphynx is a hairless breed of cat and despite popular misconception, these cats do have coat colors. The colors are just not quite as noticeable without the fur but can be seen on the cat's skin. The Sphynx is a medium-sized cat weighing between six and 12 pounds. They have long, angular and athletic bodies, with wedge-shaped heads, big eyes and large bat-like ears. They are known for being highly intelligent cats that love their humans. They also are extreme cuddlers as their lack of fur tends to make them crave warmth, especially in colder weather. 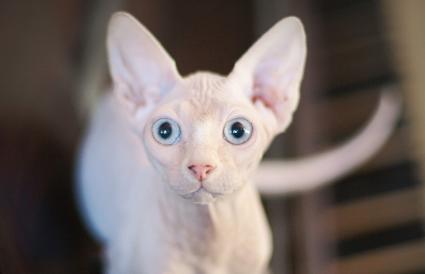 The Turkish Angora is a rare cat that hails from Turkey. They are the oldest long-haired breed and can be traced as far back as the 14th century. Solid white Turkish Angoras are the most prized color of this breed, although they come in other colors. They are a small-to-medium size cat with a delicate, athletic frame and a plumed tail. Odd-eyes are very common in Turkish Angoras as well and their eyes can be blue, green, copper, gold or amber. Their fur has no undercoat and is very silky, soft and luxurious. They are known for having a social, outgoing personality and enjoy "talking" to their humans. 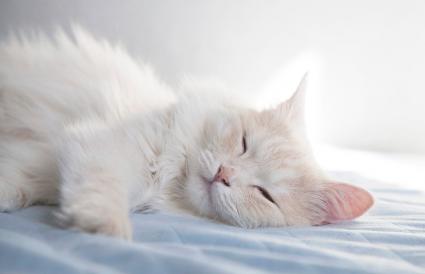 Although research hasn't found much evidence that coat color truly affects a cat personality, myths and perceptions about cat color persists. Some people believe that white cats have shorter life spans, which isn't true. However, there are some concerns with white cats to be aware of that can affect their health.

Since white cats have less melanin than cats with other colors and patterns, they are at a higher risk of sunburn. This is particularly true for extremities where there's the least hair, such as the tips of the ears. If you have a white cat and it goes outside, you should keep an eye on them to make sure they don't get overexposed to the sun. This can likewise happen with a cat that stays indoors and loves to lounge in a sunny window area.

Deafness can occur more often in white cats because it is linked to the dominant white gene. This does not mean all white cats are deaf, nor that all deaf cats are white, but the probability of a cat being deaf and white is much higher than with other colors. Deafness also appears to be strongly correlated with blue eyes in white cats.

Another common belief is that white cats are albinos. However, most white cats are not albinos, which is a total lack of pigmentation. An albino cat will have reddish pink eyes although some may have very pale blue eyes. They will also have skin that appears pink, and this includes every part of them including paw pads and nose. Cats that are true albinos are very sensitive to the sun and many albino cats are also deaf, although not all are.

A solid white cat can occur with either sex of cat and all a cat needs to be white is to have at least one white parent. The white coat color is not limited to male or female such as with the ginger tabby or calico patterns.

White cats have been a symbol of luck and good fortune in many cultures. It's reasonable to want to bring home a white cat, not just for the blessings he or she may bring to your house, but because they are beautiful animals regardless of which breed you choose. It's important to be aware of the potential for deafness when choosing a white cat, as well as making sure you can keep them healthy and out of the sun to protect their skin.