Get insider tips on how to get started participating in cat shows, what to consider when choosing a cat to show, and how to overcome some common challenges. Showing cats can be fun and rewarding once you understand the basics.

Paul Sandel operates Imagine LTD Cattery's Cornish Rex breeding program, but he's also served as a ACFA cat show judge and is still involved in the organization. Paul has seen cat shows from many different angles, including showing his own cats from an early age.

Paul Sandel (PS): The very first time I heard of a cat show was when the Cat Fanciers Association (CFA) held their annual meeting in Cincinnati in the early 1970s. I read about the upcoming meeting in the paper and hopped on the local bus to see what it was all about. I was intrigued and wanted to try showing cats. Soon after, I purchased a Seal Point Siamese and a Shaded Silver Persian for $75.00 each. I persuaded my parents to let me enter them in a show. My first show was in Rockford, Illinois. It was a show sanctioned by the American Cat Fanciers Association (ACFA). The folks in ACFA were extremely friendly and helpful, so ACFA soon became the association I considered home.

My two $75.00 cats never won any awards. However, I made friends, found a mentor, learned how to groom and how the awards at the shows worked. I have often said that I never regretted or was ashamed that I started with two less than stellar "show cats" because we learned many things together.

LTK: What are some of the roles you've played in the cat show world?

PS: I have acted as show manager, entry clerk and eventually a judge in ACFA. Although I gave up judging to concentrate on breeding and showing, I remain very involved as an Ambassador for CFA, serve on the board or as an officer in two clubs and both Tim Childers, my partner at Imagine LTD Cattery, and I are active on the Cornish Rex Breed Council for CFA. Tim and I also attended CFA's annual Meet The Breeds in New York City in October 2010 as ambassadors for the Cornish Rex Breed Council. The event was attended by over 30,000 cat lovers, and we hope to do it again this year. It was an incredible experience!

LTK: How did you get started judging?

PS: I would venture to guess that every cat show exhibitor has sat in the audience during judging and thought, "That judge is an idiot! I could do better than that!" I decided to put my money where my mouth was and applied to the ACFA judging program. Once I passed my training and exams and found myself behind the judging table, I soon realized it is much more difficult than it looks. Often you have two or three cats who all deserve to be Best Cat, but there are no ties allowed and you must make a decision on very fine points. The other difficult part is that everyone has personal preferences, but as a judge you must put those aside and rate each cat on its own merit and how it fits the standard for that breed. I always prided myself on the fact that I have awarded Best Cat to a breed that I am not especially enthralled with, but it was a wonderful example of the breed.

How to Get Started Showing Cats 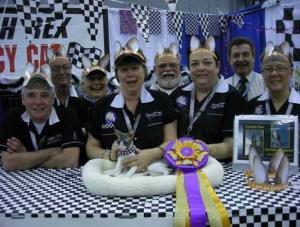 LTK: If someone wanted to show cats, what would be the best way to begin?

Anyone who wants to get caught up in the excitement of showing cats now is very fortunate. When I started, if you wished to study the cats that were winning and the breeders who were producing them, you had to wait for yearbooks to arrive in the mail and study the winning cats. Now, thanks to the Internet, you can find pictures of the best cats and see how they fit the standards.

Advice on Buying a Show Cat

LTK: What things should someone look for when buying a show prospect from a breeder?

PS: Assuming you have studied your standard and know the kitten fits that standard, the first thing to look for is health and temperament. We have had gorgeous cats over the years that were wonderful examples of their breed and should do well at the shows. Unfortunately, they hated being shown and had to be retired early. It is not fair to the cat to be forced into an uncomfortable situation just to win some awards. No respectable breeder/exhibitor would ever do that.

The other thing I highly recommend is questioning the breeder to find out where his or her priorities are. Is this a breeder who is only concerned with making sure his cats win? Or, is this a breeder who asks many questions about the home you will give the kitten? If the breeder asks few questions about the home environment the kitten is moving to, I would be concerned. Every breeder's first priority should be the home life they are sending that baby into.

Finally, if there is a contract, study it carefully. What is being asked of you as the new owner? Are you comfortable with the restrictions? One thing that sometimes bothers kitten buyers is a requirement that if the cat should ever need to be given up, it must be returned to the breeder or the breeder has the right to approve the new new home. Some would say that is unfair, but I applaud any breeder who has that stipulation in their contract. It means they actually care about what could happen to one of their babies in an unforeseen situation.

LTK: How do you get your cats ready to show?

PS: We handle our kittens from the day they are born. They are petted, loved and handled the same way a judge will handle them in the future. We crank up the stereo and run the vacuum so they are used to loud noises. They learn to play with teasy toys and get lifted high in the air as many judges will do. I once had a very happy cat freak out at a show when one of the maintenance people started shaking out a trash bag. Now I do that very early in the babies' lives so they are used to it, and it pays off! One of the cats we are currently showing, Imagine LTD's Paradise City (Perry), was in a ring when a very loud blower on the ventilation system came on. Several of the cats in the ring cowered and hissed. Perry stood up on his back legs and started making "happy hands". Perry went on to make the final and the judge commented that he had never seen a happier cat!

LTK: Most breeders go through a rigorous grooming process before showing a cat. What are some of the things you look for as a judge that owners should really focus on?

PS: Ears and claws! I have judged cats that are beautifully presented, but the ears weren't cleaned or the claws weren't clipped. My personal pet peeve are cats that are beautifully presented and wonderfully groomed that do not want to be at a show. I mentioned this before, but it is not fair to you or the cat to force it into a situation it doesn't like. Some cats have the personality to be born show cats, others hate it. Be wise enough to know the difference. 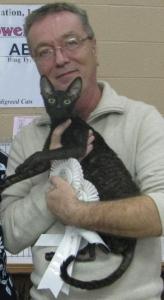 LTK: You've also shown your own cats. Which awards have you won?

PS: We have been fortunate enough to show many cats to Grand Championship, Grand Premiership and Regional and National wins. The most coveted title a cat can earn is D.M. which stands for Distinguished Merit. It means that a male has produced fifteen Grand Champions or Grand Premiers or a female has produced five of the same. A couple of years ago our friends Phyllis Jacobowitz and Natalie Rawls asked us to show Kallirex Mohegan Brave of Al-Lei for them. "Heegie" was a gorgeous black, neutered Cornish Rex. We were thrilled to show him. When he became a Grand Premier, he made his mother a D.M. There are no limits if you are willing to commit to it and enjoy the ride.

LTK: Why do you think two cats can both meet breed standards yet one will show better than the other?

PS: Two actors can step on stage and repeat the same lines, but one will capture the audience and the other will not. As I said earlier, some cats are born show cats and others are not.

Some people do not realize that you can show Household Pets (HHP) at most shows. These are cats that have no pedigrees and often are cats from a shelter or rescue. These cats have no standard. The judge must simply look at grooming, condition and personality.

My favorite HHP was a cat I judged a few years ago in Wisconsin. He was a pudgy, old guy. One ear had been half chewed off, he had scars on his nose and above his eyes. The entire time I had him on the judging table he purred. When I made him my Best HHP, I asked the owner to tell his story. Sure enough, he had been a farm cat that had been attacked by local dogs, but was befriended by the farm owner. The bottom line is, some cats grab your attention.

LTK: Is there a minimum and maximum age that cats can be shown? What is an ideal age in your opinion?

PS: Kittens are judged from four to eight months old. At eight months, they are considered adults. Once cats achieve adulthood (and that can be a wide range based on the breed), they can be a handful to show. I have had Persians who didn't mature until three years, but I've had Cornish mature at six months. Much depends on the breed and individual cats.

LTK: What do you think could be done better in the cat showing/judging circuit?

PS: You will definitely get me in trouble here! Take away the politics. I have seen many cats win because the judge is friends with the owner. That is just wrong.

I once had a clerk in my ring mention that I spent more time studying my judges books than other judges. The truth is that I wasn't looking at the books, I just kept my head down so that I didn't see who was bringing the cats into the ring. I wasn't there to judge owners, I was there to judge cats.

LTK: Should owners take anything in particular to the show with them? For example, what would go in a grooming kit to take to the show?

PS: My grooming kit is bigger than the suitcase I pack my clothes in. My grooming kit includes powders, chalks, shampoo, wipes, eye shadow, swabs, cotton pads, clippers and 100 other things.

LoveToKnow would like to thank Paul Sandel and Imagine LTD Cattery for sharing information on cat shows. His parting advice to those new to the cat show circuit is: "Have fun. That is the point of showing cats! And don't be discouraged. Most cat show exhibitors want to share the fun they are having!"