If you've never heard of Japanese Bobtail cats, you may be surprised to learn that little-known breed may be less problematic for allergy sufferers. According to a respected breeder, these are also charming, interactive cats that love to be part of your family.

Benhana Japanese Bobtails is a cattery located in Ontario, Canada. Owner, Dawn Benhaim took the time to speak with LoveToKnow about her beautiful Japanese Bobtails, what to look for in a show cat and what she looks for in an owner for one of her kittens. For the most part, Ms. Benhaim breeds her kittens to show and not to sell. However, she does occasionally have a kitten available.

LoveToKnow (LTK): Dawn, thank you for taking the time to talk to us about the amazing breed of Japanese Bobtails (JBTs). How did you first get interested in JBTs?

Dawn Benhaim (DB): I had always seen pictures in various cat books, but I had never seen one in the flesh (still the case with most people!). One weekend in 1989, I was browsing the Saturday paper. While scanning the "Pets" column in the local newspaper, I saw an advertisement for JBT kittens. I called the number and asked if I could come over to see the kittens because I was most curious about the breed. While I just wanted to see rather than acquire, that's not what happened. There were two kittens; I left with the female and returned two weeks later for her brother.

LTK: You also show JBTs. What are some of the features you look for in a show cat that exemplify the breed standard?

DB: I look for several things, including:

LTK: What are some of the awards your cats have won on the cat show circuit?

DB: I have bred and owned Grand Champions, Grand Premiers and Distinguished Merit Cats, and I have also bred a National Winner.

LTK: What is unique about this breed?

DB: The absence of what one expects a cat's tail to be. The tail's appearance is simply the result of a benign mutation of the relevant gene. It takes any amount of kinks and turns in on itself; in describing it one should think of the extreme kink and coil of a piggy's tail, and then multiply that ten fold.

LTK: What kind of personalities do JBTs have?

DB: The personality is one of the most endearing aspects of this breed. They are cats with a very high activity level. They are also very adaptable and true companion cats that want to be with you at all times. They do not necessarily want to be "on" you, but in close proximity, whatever you may be doing, be it sleeping (on the bed with you), watching TV (beside you), or performing household chores (cavorting in the sheets while you are trying to make the bed). Even bathroom activities are not immune to their presence. They are very intelligent, and telling them not to do something can be a challenge at times because they will understand you perfectly, but still try to outsmart you. By the same token, they are obedient, even if you have to tell them to do/not to do something more than once. Most will come running when you call them, particularly if there is food involved. To sum it up - they absolutely adore their humans and are very interactive with them. 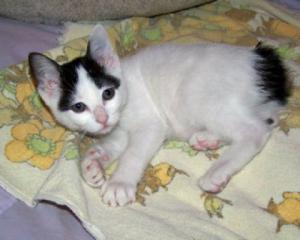 LTK: What does a Mi-ke (mee-kay) JBT look like?

DB: The Mi-ke is the considered to be the "ultimate" JBT for breed aficionados. "Mi-ke" is Japanese for 'three fur", also generally known as calico. It is usually red (aka orange, marmalade, etc.), black and white. In the same color family are other similar patterns where red tabby, silver tabby, and the like have replaced the black. This are referred to as "patterned Mi-ke".

LTK: What are some other acceptable color combinations?

DB: The breed comes in all patterns and colors, including solids, all of which are acceptable for show purposes with the exception of the the agouti (color-tipped hair shaft like an Abyssinian) or pointed (like a Siamese). The most common colors in the show ring, however, tend to be red and white, mi-ke, and black and white (my favorite). This is simply due, I think, to the eye-catching color contrast.

LTK: When you are placing your cats from your breeding program, what type of owner do you look for? Do you have any particular requirements before you let a cat go to a new home?

DB: It is most important that I try to ascertain which type of kitty the prospective owner may be looking for, and I also try to sum up the personality of that owner. For example, a person may want the type of cat that stays on the floor all the time and has a very low activity level, in which case a JBT is definitely not the cat for that person (Hello Mr. Persian?) My ideal homes are those with children who appreciate and know how to handle animals and those folks who want active, interactive and very entertaining companion pets. I have three main conditions when placing my kittens:

LTK: If someone wants to own this beautiful breed, what are the things they should look for when searching for the right one?

DB: If someone is looking for a show cat, those features I mentioned earlier should be mostly present. However, regardless of whether show cat or much loved pet, the cat should have an outgoing, curious, playful, easy and loving temperament. It's always a good sign when a cat immediately purrs when it's picked up. It goes without saying that bright eyes and good health, along with a certificate to testify to this, should also be evident.

LTK: Are there any health issues to be on the lookout for if you own a JBT?

DB: The JBT is what is known as a natural breed. It is genetically pure and not a combination of different breeds as many presently recognized breeds are. Further, because they are not widely known and have never received much in the way of media exposure, there is no great demand, hence they have not been over bred. I can happily say that this breed does not have any known or identified inherited health problems.

LTK: Bobtails are low shedding cats because of their limited undercoat. What about allergies? Are they low dander cats, or would another breed be better for mild allergy suffers?

DB: There are practically no breeds that are truly hypoallergenic. A well-bred JBT has no undercoat, and this applies to the Long Hair JBT's as well. This is a breed that keeps itself clean, although occasional combing/brushing and even bathing is helpful. Bathing a JBT is easy to do. Just make sure to rinse thoroughly, towel dry as much as possible, and leave kitty in a warm room for about two hours to air dry. All of this keeps the dander to a minimum.

LTK: Anything else you'd like to add about JBTs or showing and breeding this type of cat?

DB: Just as a general comment, this breed is something of a well kept secret, yet those few people who have them adore them and tend to have more than one. When those kitties pass over the Rainbow Bridge, their humans always want more. Truly, they are much, much more than just 'cats'.

A huge thank you to Dawn Benhaim for helping us become more familiar with this unique breed. You can learn even more about the Benhana JBTS by visiting the Japanese Bobtail Breed Council website.