If you need something to cheer you up, it's hard to beat the image of cats in wigs. Author Julie Jackson talks about the idea that inspired her wonderful book featuring some felines with unique hair accoutrements that would put any human fashion model to shame.

A Cat, a Wig and an Idea

Freelance writer Julie Jackson and photographer Jill Johnson partnered together to create a hilarious book called Glamourpuss: The Enchanting World of Kitty Wigs. The book was inspired by Jackson's Siamese cat Boone who keeps her company at home during the day as she works. Says Jackson, "Boone was a permanent fixture on my desk. There were so many times a day when I would look up and catch him staring at me with those big blue eyes. I think he was probably trying to get the idea into my head by osmosis." 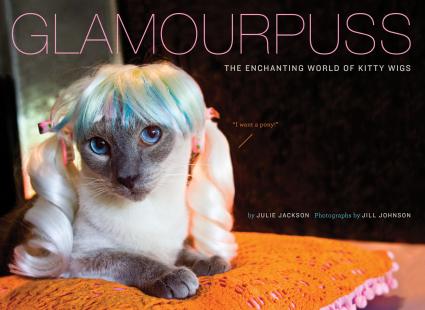 What started out as a way to amuse herself by putting wigs on Boone, eventually led to the idea of a website and book. Jackson, "made the decision as soon as I found a willing photographer" With the help of Dallas photographer Allison V. Smith who generously volunteered her services and recruited a few more volunteers, Jackson met Jill Johnson and Jill, "later became the photographer for the Kitty Wigs book, Glamourpuss. She's a hoot."

About the Kitty Wigs

At the time the book was released Jackson had wigs available for sale for other fashionista cats. The styles were, "Bashful Blonde, Pink Passion, Electric Blue and Silver Fox." For the book, "we had dozens of different styles" but "the wigs aren't easy to get made so I mostly stick to the four basic colors." 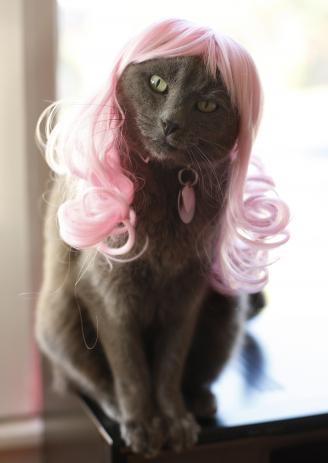 Getting the Cats to Tolerate the Wigs

If you're planning on putting costumes such as wigs on a cat, realize that many will find this annoying to outright scary. On the other hand there will be cats who don't mind it if you take your time. Says Jackson, "It depends on the cat and, more importantly, the approach of the photographer. As you know, you can't (and shouldn't) force a cat to do anything." She recommends, "Full tummies usually help. And don't expect any cat to wear a wig around the house; these are strictly photo props. Most importantly, they should never be left out for cats to chew on; that could spell disaster."

Why Place Wigs on Cats at All?

Jackson believes, "It's all about doing something fun and interesting with your cat. Unusual, maybe, but you know how cats are endlessly curious. This gives them something to think about. The photos in the book give them something to aspire to."

The Glamourpuss book is a hardcover featuring 60 full color photographs and was published by Chronicle Books in 2011. You can find copies of the hardcover on Amazon for about $12 and it's also available for Kindle for about $6. Jackson says that the book features "all kinds of cats (all rescues) in a large variety of wig styles. We also added captions that express what we felt each cat may have been thinking or dreaming about while wearing a wig. I was completely amazed every time Jill sent me a new group of photos because the expressions on the cats' faces are really incredible and priceless. It's not about cutesy poses. There are all kinds of expressions and it was really fun to try to interpret what we were seeing into a fitting caption." When the book was published it was quite a sensation, with cat wig fashion photo spreads appearing in magazines like Harper's Bazaar Japan and CosmoGirl, as well as features on The Tonight Show, People Magazine, Good Morning America and CNN.

Kitty wigs is a cute, unusual idea and a way to have fun with your cat and take memorable photos of him or her. You can find similar cat wigs for around $39 for your own cat through Cushzilla as well as some adorable options for your dog so he doesn't feel left out. Cat Lovers Paradise also carries some stylish options for about $20 each. Cat Internet sensation Maru the Scottish Fold followed suit with his own wig fashion shoot in 2017. Remember to only use wigs and other decorative wear on your cat if he or she is comfortable with it and be prepared for your cat to turn down a chance for to experience true glamour.