One of the more unusual sounds that cats make is chattering their teeth. Cat chattering is a behavior that's often seen when cats are staring out a window, though it can happen in other situations as well.

Why Do Cats Chatter?

This interesting vocalization is also commonly described by cat lovers as twittering, chittering, or chirping. Often it's not just the noise you'll hear, but also the visual of the cat physically chattering their teeth and moving their jaws. The behavior makes sense when you understand the basis behind it.

One of the more recently understood reasons behind cat chattering was discovered by researchers studying pied tamarin monkeys in South America. They witnessed wildcats imitating the noises that the monkeys made, which is significant as this type of monkey is typical prey for the wildcats. Scientists believe it's possible that cats adapted to copy the sounds of the animals they're hunting in order to confuse and catch them. If you've ever witnessed a cat chattering at birds or squirrels outside a window, this theory seems quite plausible as the sound is similar to noises birds and squirrels can make. 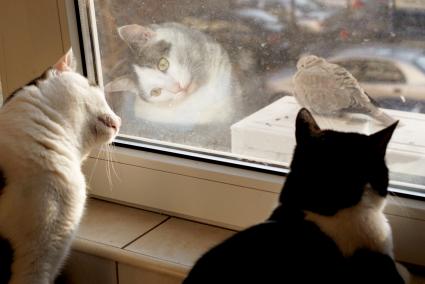 A more commonly known reason for cat chattering is arousal or excitement. Cats will do this behavior when looking out a window because seeing birds, squirrels, or other small animals will excite their hunting instinct. It's a sign your cat would probably pounce on these outdoors if they weren't restricted by the window glass. It's fine to let your cat chatter at things they see outside the window, but you may want to step in and redirect them to another activity if they get too aroused.

If the cat gets too aroused watching birds or squirrels, the feeling can move from excitement to something less benign. Arousal that they can't express because they can't get to their pretty can lead to frustration. Chattering may be a sign your cat is irritated at the sight of prey they can't get to, and they don't have a way to express their frustration. In these cases, you may want to restrict access to the windows and find activities for your cat that they can enjoy without feeling irritable. Try engaging them with toys that give them a chance to "act out" these frustrated behaviors such as chasing and "killing" a mouse toy at the end of a wand. 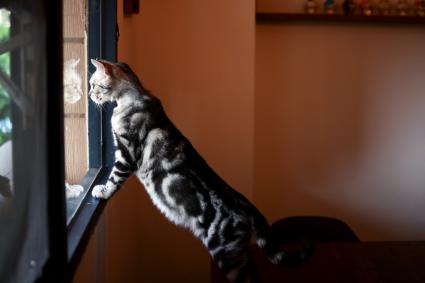 Chattering May Simulate a Kill Bite

Another theory held by some scientists is that cats chatter their teeth in order to exercise their jaws to get ready for the kill. The so-called "kill bite" occurs when the neck of the prey animal is grabbed by the cat's jaws in order to kill it. Cats may chatter because they're preparing their teeth and jaws to get ready for the kill bite, or it may be a sign of frustration. The cat realizes it cannot get to its prey and does the motions with its mouth as a reflexive behavior. This is known as "vacuum activity" which is an innate, fixed action pattern behavior an animal does without the stimulus that normally would bring them out. In other words, the cat is performing the kill bite behavior without the actual prey, which is the stimulus, in its mouth.

If you notice your cat chattering with no obvious stimulus, it's possible they're making the noise because of pain from their gums or teeth. Accompanying signs might be drooling excessively, bleeding gums, bad breath, pawing at their mouths, lack of appetite, and weight loss. If your cat suddenly begins chattering at any time of the day, and it includes any of these other symptoms, get them to a veterinarian right away for a dental exam.

Chattering, for the most part, is an innocuous behavior that many owners find entertaining to watch. It doesn't harm the cat to chatter at prey outside the window, but if you notice your cat becoming overly frustrated, it's a good idea to distract them by engaging them in play with a toy, brushing them, or having a snuggle session on the couch. You can also block access to the window or pull down the blinds if you feel your cat needs a break from all the bird watching excitement.