Most cat parents have experienced their cat rubbing its face on things. In fact, humans love when cats come over and rub their heads against them. It feels like a way for your cat to show he loves you, but is that really the reason why a cat rubs their face against you?

Understanding a Cat Rubbing Its Face on Things

If you've ever wondered, why does my cat rub his face on my face, you aren't alone. This ubiquitous feline behavior does indeed involve a display of affection, but there are actually several underlying reasons cats do this. You may see a cat rubbing his face on your face, other cats, or even walls and furniture. This behavior, which is known as bunting, serves several purposes for the cat.

Cats have scent glands in certain areas of the body, and their head region has several by their chin, mouth, ears, neck, and cheeks. Scent glands can also be found on a cat's paws and along its tail. When a cat rubs a scent gland against something or someone, they are leaving their pheromones, or scent, behind to "mark" that person or thing. It's a way that cats claim territory and communicate this information to other cats in the area. Even if you have a single cat household, cats will still do this as part of their instinctual behavior.

Bunting is also a behavior female cats use with male cats when they're in heat. If you have an unfixed female who is rubbing its face and other scent gland areas on you or on objects much more than usual, it's related to her being in estrus. Your cat should return to normal when she's done. On the other hand, in general, male cats tend to bunt objects like walls and furniture more than female cats. This is also related to mating, as establishing territory and making sure other males don't interfere if a female happens to come into heat is important to a male cat, even if they've been fixed.

In a multiple cat household or cat colony, bunting is a way cats will greet each other. By rubbing their scent against other cats in their colony, they are releasing their scent on them. Likewise, they're getting the scent of the other cats on them, and this facilitates social affiliation between cats. It creates a "group" scent that all the cats in the home or colony recognize. If you've ever taken a cat to the groomers or the vet and then returned home to find your other cats unhappy with his or her presence, it's because they lost that group scent from being bathed or from a medical procedure. Brush your other cats and then use that brush to brush the returning cat so the scent will be dispersed on his or her fur. 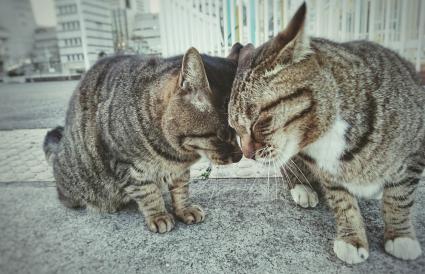 Bunting also helps cats to get more information about a new person or cat, as rubbing against you allows them to pick up your scent. In these cases, the cat is more likely to rub against a stranger's leg instead of rubbing their face on your face. This form of closeness is reserved for beloved owners with an existing relationship to the cat. Bunting is also considered a form of "timestamp" for cats when it's used on objects, walls, or furniture. Another cat can tell by the scent left behind when a cat was there, and this tells them whether they should be on alert for a run-in with the other cat.

Another reason cats rub their head and face against you is a way to express affection. You can take it as a form of high praise if your cat rubs his head and face on you. This behavior is often accompanied by purring or chirping, which is an additional way to tell your cat is very happy to be with you. You may also see your cat do this behavior with other cats or even other pets like dogs, which is a sign of a harmonious pet household.

Cats can also use bunting to calm themselves when they feel anxious or stressed. By dispersing their scent on objects around them, they are filling the area with their scent, which can make them feel more secure. You may especially see this behavior if you move to a new home or adopt a new cat or kitten. Because the new environment is completely alien to the cat, they will spend a lot of time exploring and rubbing their head and face on furniture, walls, and people to not only establish territory but also make the surroundings feel more familiar and safe.

Cats Rub Their Heads for Many Reasons

For the most part, a cat rubbing his face against your face is a clear sign of love and affection. Bunting can also involve territorial and scent marking and mating behavior between cats. Cats can also use this behavior to self soothe and get used to a new environment. Overall, it's a positive behavior that cats owners enjoy and encourage, especially if the cat includes purring and kneading their paws as part of the package.

0
Comments
© 2006-2020 LoveToKnow, Corp., except where otherwise noted. All Rights Reserved.
Resources, Advice & Tips for Covid-19
Read More
Why a Cat Is Rubbing Its Face on People (or Things)