One of the adorable behaviors that cats do is reaching out their paw toward their human companions causing them to wonder, "Why does my cat reach out his paw to me?" There's usually a wholesome explanation for this behavior, though it can also occasionally be a cause for concern.

Why Do Cats Reach Their Paws Out?

To understand why your cat is reaching his paw out to you, you need to look at his overall behavior and body language. This can provide valuable clues to decipher what he's trying to tell you.

Your Cat Is Simply Stretching

One of the most obvious scenarios is cats that reach their paw, or paws, out when lying down. If they look relaxed and fully extend a paw or two, this means they are stretching their muscles. This is a sign of a happy, contented cat who's enjoying himself.

If your cat walks up to you and extends a paw, this could mean he's looking for attention. Observe his body language and any vocalizations he makes to determine what he wants. If he looks calm and is purring, it might be that he wants to jump up on the couch with you and enjoy some snuggle time. Or, if his body language looks excited and energetic, he might be telling you that he wants you to pull out one of his cat toys and have some playtime with him. 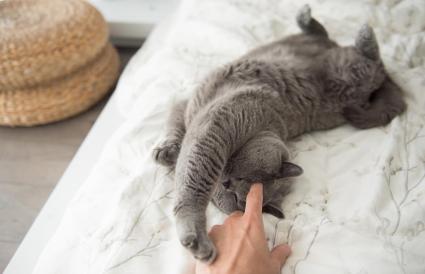 They're Leaving Their Scent

A cat has scent glands in their paws, and they may be attempting to "claim you" with their scent by reaching out to you with a paw. This behavior is more often seen with head butting and rubbing, as cats also have scent glands in their cheeks and forehead. Cats will mark their owners with their scent as a way to show social affiliation with you, which is a sign they enjoy being part of your family.

Reaching Paws May Be a Precursor to Kneading

Kneading, or "making biscuits," is a behavior that contented cats do with their owners. They basically move their paws back and forth on you, and this usually is accompanied by extreme purring. Sometimes when a cat reaches out just one paw to you, this is the first step before they move into full kneading action.

Some cats will learn through observation and repetition that they can solicit food from you by reaching out their paws. If your cat comes up to you and reaches out his paw while meowing, and it's around the time of day when he gets his meals, this may mean he's hungry. If you get up to feed him each time he does this, a cat can learn that this body motion can get him his dinner. Cats will also touch you with their paw to wake you up in the morning for the same reason, especially if they're successful regularly getting you out of bed to feed them.

It Could Indicate Pain

While most often paw reaching is a benign behavior, a cat can also do it if they're in pain. If a cat hurts his paw, such as cutting it or pulling a muscle, he may come up to you and extend it as a way to ask for help. There are also certain illnesses that will lead to limping, such as feline calicivirus, which causes "limping syndrome" in young kittens. If your cat appears stressed and you notice limping, swelling, or bleeding, take his paw gently in your hands and examine it for wounds. It's best to give your veterinarian a call and bring your cat in if the problem persists or if he has a wound that needs treatment.

Why Does My Cat Reach His Paw Out to Me?

If your cat reaches his paw out to you, it's usually easy to decipher what he's trying to tell you based on the context and how he acts. Take heart that this is most often a way a cat shows affection and interest in you. It's only a cause for concern if your cat is reaching out his paw and appears sick or in pain, in which case you should get him to a veterinarian to check for injuries or possible internal illnesses.

0
Comments
© 2006-2020 LoveToKnow, Corp., except where otherwise noted. All Rights Reserved.
Resources, Advice & Tips for Covid-19
Read More
Why Does My Cat Reach His Paws Out?