Coconut oil has recently gained notoriety as a 'superfood' with a variety of health benefits for people, you can also use food-grade coconut oil on cats to treat a variety of conditions and symptoms. From adding moisture to your kitty's skin to improving brain power in your older cat, there are some great uses for this natural remedy.

Coconut oil is known to do wonders for hydrating a human's skin, but cats can also reap these benefits. A variety of factors can contribute to problems with a cat's skin or coat, and cats suffering from dry, flaky skin or dull fur may see quite a difference after using coconut oil.

How to Use Coconut Oil to Moisturize Your Cat

According to VetInfo, coconut oil can be given orally or applied topically to assist with improving skin or coat condition.

Gingivitis, or the inflammation of the gums, is common in cats, especially if they don't regularly have their teeth brushed.

How to Use Coconut Oil for Gingivitis

BostonVetStreet advises rubbing a pinch of coconut oil directly on the gums to help treat inflammation and pain caused by mild gingivitis.

PetMD states omega-3 fatty acids, which are prevalent in coconut oil, can assist in the slowing of progression of kidney dysfunction, and PetEducation states these acids may even slow cancer progression. The acids found in coconut oil provide energy and extra protein to a cat's body.

By allowing your cat to eat one-half to one teaspoon per day or mixing this amount into your cat's food, you may be able to slow the progression of kidney disease and cancer.

Coconut oil absorbs easily in the digestive tract. BostonVetStreet notes coconut oil is a safe way to give your cat some relief from constipation as moisture and fatty acids help move along any stool that is backed up in the intestinal tract.

How to Use Coconut Oil for Your Cat's Constipation

Start by giving your cat one-half teaspoon per 10 lbs of weight once per day. You can allow your cat to lick it off a spoon or mix the oil into his food. If your cat does not have any side effects but is still suffering from constipation, try increasing the oil intake to the same amount taken twice per day.

Use Coconut Oil to Improve Brain Power in Geriatric Pets

As pets grow old, their minds tend to slow down, and they aren't able to react or learn as quickly as they did when they were younger. Coconut oil is rich in medium-chain triglycerides, which can improve brain energy metabolism and decrease brain lesions in senior pets.

How to Use Coconut Oil to Improve Your Cat's Brain Power

To improve your cat's brain function, HealthyPets recommends feeding your cat one-quarter teaspoon per 10 lbs of weight twice per day, given by itself or mixed with food.

Coconut Oil Is a Remedy for Hairballs

Hairballs are normal for cats after grooming themselves, but excessive hairballs don't have to be the norm. Coconut oil is a non-petroleum based lubricant, and Dr. Becker at HealthyPets says Omega-3 acids are an important factor for getting rid of hairballs.

How to Use Coconut Oil for Hairballs

Adding just a pinch of coconut oil to your cat's food every day can make his life (and yours) much more comfortable.

In a study with 50 overweight cats, researchers at the National Institutes of Health found cats fed daily coconut oil reported weight loss and leaner body mass than those without coconut oil. The oil appeared to have aided in metabolic function.

How to Use Coconut Oil to Add Lean Body Mass

To promote lean body mass in your cat, mix one-half teaspoon of coconut oil into his food once per day.

Is Coconut Oil Safe for Cats? 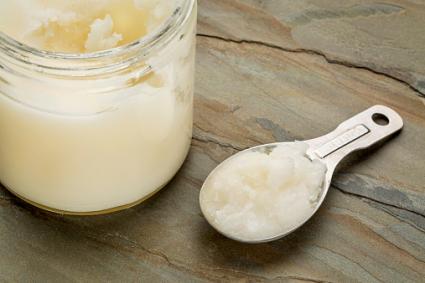 Coconut oil is extremely fatty and caloric, with 14 grams of fat, 12-13 grams of saturated fat and 117 calories in just one tablespoon. Due to its fatty nature, small and gradual use of coconut oil is recommended. If you use coconut oil regularly for your cat, you should be aware of the following potential issues:

Coconut Oil Is a Healthy Alternative

Organic coconut oil for cats is a safe and effective method of dealing with many feline health issues without the use of medication. Coconut oil is readily available and affordable, and introducing it into your cat's diet can improve his overall health and well-being.

0
Comments
© 2006-2021 LoveToKnow, Corp., except where otherwise noted. All Rights Reserved.
7 Amazing Ways to Use Coconut Oil for Cats