Unlike dogs in heat or humans with menstrual cycles, cats do not bleed during estrus. If you see signs of bleeding during your cat's heat cycle, this can indicate a possible problem that may need veterinary care.

Bleeding During the Estrus Cycle

Most cats do not bleed during their heat cycle. Veterinarian Dr. Jeff Werber states that cats "usually do not bleed" during heat and a cat bleeding during estrus "is not normal." However, he notes it can happen with some cats. If a cat did bleed during heat, he relates that it would be "a very thin, light ooze" that owners should not be concerned about.

Is a Cat Bleeding During Heat a Concern?

If a cat does bleed during heat, Dr. Werber says, "If it persists or if it becomes a more aggressive bleed, I would definitely have it checked out" by a veterinarian. He states it's possible that "it might be fine" but "it's rather atypical for them to be bleeding." A cat that is bleeding heavily may have an internal problem not related to their heat cycle.

Reasons a Cat May Bleed During Heat

Possible reasons that you may see a bloody vaginal discharge during heat "could be a sign that something is going on internally" such as ovarian or follicular cysts. Dr. Werber notes it might also be an issue with the uterine tract and it's prudent to have a veterinarian examine the vaginal canal and area. She may have conditions such as vaginitis or a urinary tract infection, or if she's pregnant, she may have miscarried her litter. Depending on the reason, such as a urinary infection, it may also be painful for the cat and a vet visit is warranted to alleviate their discomfort. 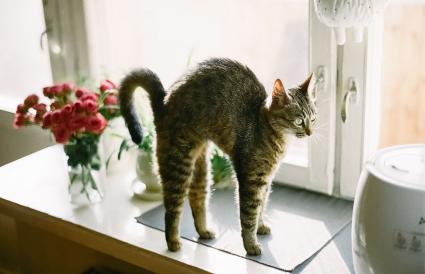 Determining When a Cat is in Heat

Since cats generally do not bleed during heat, it may seem more difficult to determine when they are in heat. Cats are polyestrus, which means they can go into heat several times a year. The cat heat cycle "lasts every 21 days" during the heat season which is generally twice a year during the spring and the fall. Cats in heat are not in pain but they can be uncomfortable due to the hormonal fluctuations. As a result you will notice a collection of unusual behaviors such as:

Dr. Werber explains that one way to tell if a cat is in heat is to scratch their rump at the base of the tail and their rear should just "slide up" as if she's inviting a male cat to mate.

A spayed cat should not bleed from the genital area. If you observe a spayed cat with a bloody discharge, this is a sign of a likely internal condition and a vet visit is needed. Dr. Werber explains that the typical way cats are spayed in this country are "ovariohysterectomies where we take out the ovaries and uterus." Therefore cats would not bleed related to breeding or estrus. "Any bleeding from a cat after that surgery would probably be due to a bladder problem."

While most cats do not bleed during their heat cycle, it's possible for them to have a light vaginal discharge with blood in it. If the bleeding is more intense, your cat should visit with a veterinarian as this is a sign they may have an internal medical condition that needs treatment right away.

1
Comments
© 2006-2020 LoveToKnow, Corp., except where otherwise noted. All Rights Reserved.
Do Cats Bleed When in Heat?