Cats are often thought of as independent beings who are fine living on their own. They're even unfavorably compared to dogs who appear more invested in relationships with other dogs and people. In truth, cats are indeed social animals and need stimulation and companionship in their lives to be happy.

Can Cats Get Lonely?

Cats can definitely become lonely. Sadly, cats suffer from loneliness because often humans perceive cats as being unsocial and independent and happy to be left alone for hours at a time. This misperception leads to problems for cats and their owners.

The Sociability of Cats

Cats get their reputation for being aloof because they evolved to hunt prey on their own. Feral and wild cats actually live in groups with a social structure involving mutual cooperation between female cats and their kittens. People see cats as not being social because, according to veterinary behaviorist Sharon L. Crowell-Davis, DVM, PhD, DACVB, "the false perception that being 'social' means behaving like species (e.g., humans, dogs, horses) that humans commonly perceive as social." In other words, just because your cat doesn't act like a human-dependent dog, this doesn't mean they do not crave companionship and can feel extreme loneliness.

While cats are definitely social, it's true that some cats do not care for other cats. This can be due to poor socialization as a kitten, territorial behavior especially among unsterilized cats, or simply that cat's unique personality. A cat may not want other cats around but can still become lonely without human interaction and stimulation.

How Long Can a Cat Be Alone?

In general cats can be alone longer than a dog because they do not need to be taken outside to eliminate. This is another reason why cats can be seen as not "needing" people as much. If you have a cat and will be out of the house, you should try to make sure your cat is not alone longer than the following times based on your cat's age:

Signs Your Cat May Be Lonely

How can you tell if your cat is lonely, or maybe just bored? Oftentimes the two can go together as a cat that has little to do and no companionship can quickly become bored and lonely. There are definite signs that your cat may need more interaction. 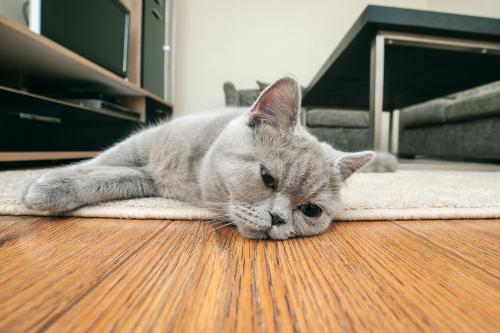 If you notice your cat making a lot more noise than usual, this can be a sign that he or she feels needy. If their noise making is especially intense when you come back home or when you leave, this indicates that they may be stressed by being left alone.

If you notice your cat's behavior changing over time, this may be due to loneliness, especially if you've changed your work or school schedule and are away more often than they're used to. Some common behaviors you'll see with lonely cats are:

Is It Loneliness or Boredom?

As previously noted, loneliness and boredom often go hand-in-hand. Even if your cat may just be bored and not lonely, working on easing their boredom can prevent future problems with loneliness. Bored cats will engage in destructive behavior, such as digging in your plants, because they have nothing better to do, whereas a lonely cat may dig up a houseplant to alleviate their anxiety over being left alone. Regardless of whether your cat is lonely or bored, or both, the treatment plan involves the same type of life enrichment. 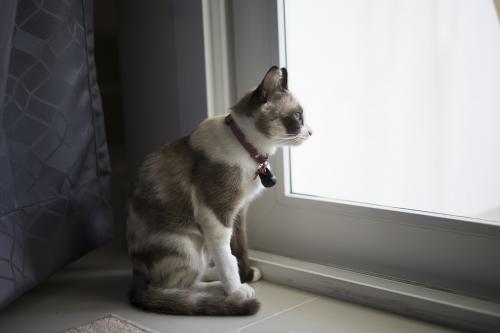 There are several ways you can make a lonely cat much happier. Not all of these will work with every cat so it's important to know your cat's own unique personality.

Some cats enjoy the company of other pets, such as dogs or even small pets like rabbits. Other cats may love spending time watching a big fish tank. You may not want your cat to interact with small pets when you're not home to supervise, but simply having them in the house make your cat feel less alone.

Another option if getting more pets isn't on the table is having a pet sitter come in once a day to check in on your cat. Says professional pet sitter Morgan Weber, "Even shyer cats appreciate just having the presence of another person in the house, and this can ease loneliness. If your cat is shy, a pet sitter can come in and play music or read to the cat and for more outgoing cats, spend time playing with them with toys so the cat curls up and goes to sleep for the rest of the day after the sitter leaves."

Cats are highly intelligent creatures, and while it's true they do sleep quite a bit during the day, when they're up and awake, they need mental stimulation to stay behaviorally healthy. There are many ways to enrich a cat's life mentally and physically:

If you notice your cat moving from simple loneliness to depression, you can speak with your veterinarian about providing some anti-anxiety medication to help them while you work on providing more enriching activities for them. Some cat owners also recommend using a pheromone plug-in called Feliway, although user results can vary. 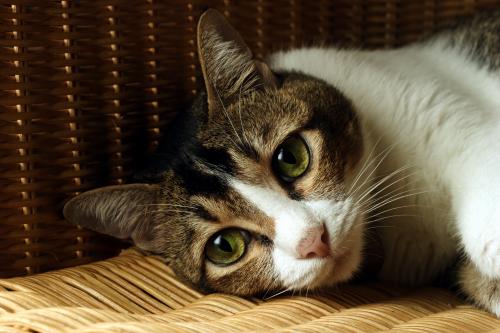 Is It Loneliness or a Medical Problem?

Many of the signs of loneliness, such as increase vocalization, excessive grooming, and clingy behavior, can also be a sign that your cat has an underlying medical issue. It might also indicate that they are going into heat if your cat is not fixed. It's also a wise idea to bring your cat in for a check-up to make sure there is nothing physically wrong as cats can also give off very subtle signs that they are ill, and you do not want to wait until a disease has progressed to dangerous levels before getting treatment.

Despite the common belief that cats are aloof creatures who deign to let humans keep them as pets, they actually are very social animals. While your cat may not greet you in an over-excited rush like a dog when you come home, this doesn't mean they didn't miss you during the day and for some cats, this loneliness can be quite profound. Make sure your cat gets all the mental and physical enrichment that they need to keep them happy, healthy, and secure in their affections from you.

1
Comments
© 2006-2020 LoveToKnow, Corp., except where otherwise noted. All Rights Reserved.
Do Cats Get Lonely?