It's not unusual for a young kitten's eye color to change during her first few months of life, but if her eyes begin turning color after she's three months old, there could be cause for concern. Don't ignore the issue.

Why Do Kitten Eyes Change Color?

Kittens are born with blue eyes, and they appear this color in the beginning because the irises don't have pigment yet. Pigment cells known as melanocytes develop during the first three months of life, and the more melanocytes there are, the deeper and darker the kitten's eyes will eventually be. The final color can range anywhere from light blue to a deep amber, and a cat's ultimate eye color may also be determined by her breed heritage. 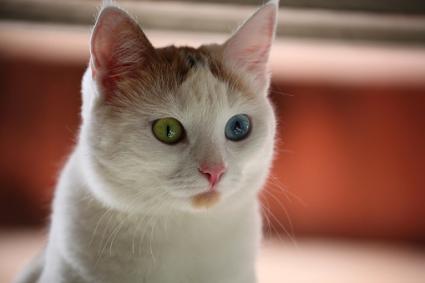 In some cases, a kitten develops eyes that are two distinct colors. Both eyes may develop two colors, or each eye may be a different color. This color variation, referred to as heterochromia, occurs when there are unequal amounts of melanocytes in the irises, and the full-color change can take months to complete. Heterochromia is not considered a medical problem, and cats that have this condition look quite unique.

Once a kitten has developed her true eye color, the color shouldn't change over the course of her life. If it does, the change can usually be attributed to some sort of disease or trauma to the tissue which could affect one or both eyes. Here are some of the most common causes. 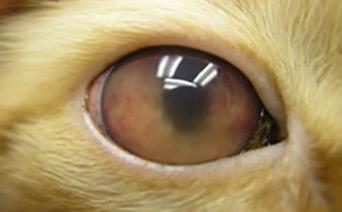 Uveitis causes inflammation which changes a cat's normal eye color to a murky red. It's typically caused by trauma, an infection, glaucoma or cancer, but the underlying cause can be difficult to diagnose.

Uveitis is determined by appearance and other accompanying symptoms including tearing, obvious pain, and sensitivity to light. Treatment options include anti-inflammatory medication and possible surgery. 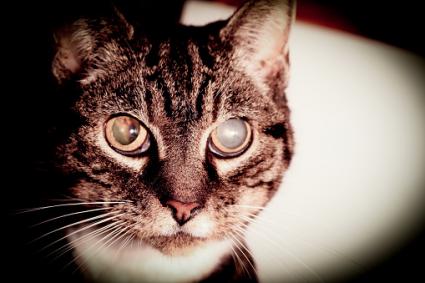 Cataracts cause a cat's lens to become cloudy or milky looking, and it can affect one or both eyes. Cataracts can form due to injuries, but they can also be caused by diseases such as diabetes or hypertension as well as other disorders.

Cataracts are diagnosed by their appearance as well as any obvious loss of vision. Treatment for the underlying cause is essential, but surgery is sometimes required to remove an affected lens and replace it with an artificial lens.

Jaundice is a common byproduct of liver disease, but there are other diseases, such as cancer and feline infectious peritonitis, which can also cause jaundice. A buildup of bilirubin in a cat's system turns causes a yellow discoloration of the whites of the eyes, skin, and mucous membranes.

This yellow coloration is often accompanied by other symptoms such as lethargy and loss of appetite. A veterinarian will typically run blood tests and a urinalysis to diagnose the exact cause of the jaundice. Treatment varies according to the underlying cause, but it usually includes hospitalization and intravenous fluids as well as nutritional support. Some diseases that cause this symptom are fatal. 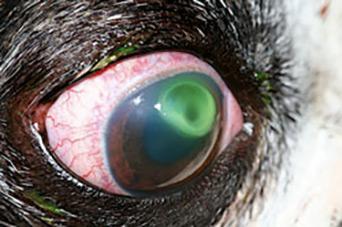 Corneal ulcerations are the result of damage to the corneal layer that covers the front portion of the eye. An ulcer can make the eye look cloudy or milky, and it may also take on a pinkish tint due to irritation. Ulcers are typically caused by damage such as a scratch from another cat or trapped debris, but infections, including feline herpesvirus infections, can also lead to eye ulcers.

An ulceration can be diagnosed with an exam. Drops containing fluorescein are placed in the eyes, and the dye will leave a green stain on the damaged area. Treatments usually consist of applying topical medication to the ulcer as well as administering antibiotics to treat or prevent secondary bacterial infections.

Corneal sequestrum produces brown to black plaques of dead tissue on the cornea. Persian, Siamese, Burmese, and Himalayan cats seem to be affected by this condition more than other breeds.

This painful condition is diagnosed by the appearance of plaques and accompanying symptoms such as tearing and squinting. Some treatment options include antibiotics and anti-inflammatory drops, antiviral therapy or removal of the affected tissue followed by a corneal graft to protect the cornea as it heals. 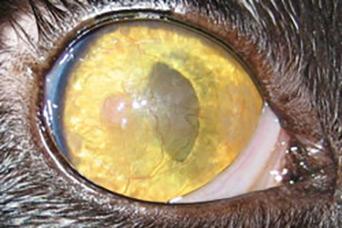 Eosinophilic keratitis causes a pink, white, or gray film to develop over the cornea. A veterinarian typically reaches a diagnosis by extracting cell samples from the cat's eye to look for eosinophils or mast cells in the samples.

While it's often difficult to determine the exact underlying cause of this condition, the eyes can be treated with a topical steroid. Early treatment is crucial to avoid permanent eye damage.

Early Diagnosis Is Key to Treatment

Since cats eyes changing colors can be a sign of a serious health issue, it's import to check your pet's eyes on a daily basis. If you spot a minor color change in your cat's eyes early on, you can have your veterinarian examine her at the earliest opportunity. This will not only allow you to keep her eyes as healthy as they can be, it might also help your vet diagnose and treat life-threatening medical conditions before they reach advanced stages. A check only takes a few moments, and it's one of the easiest things you can do to ensure your pet's overall health.