Before you let your kitty lap up the rest of that beef stew with onions in it, take a minute to check which people foods make cats sick. Onions are just one of the culprits to avoid in order to keep your kitty safe.

It is the ethanol in beer, liquor, and wine that is problematic for cats, just as for people. The relatively small size of a cat means she doesn't need to drink much to become inebriated. While a drunken kitty might superficially seem funny, it has a serious side. Sensitivity to ethanol means cats are at greater risk of complications such as:

If your cat has more than a taste, keep the cat indoors to stop her wandering off and phone the vet immediately. According to Vets Now, as little as a tablespoon of alcohol has the potential to cause liver failure and brain damage.

Just because fried onions are delicious on a hot dog, doesn't mean they're safe for a cat (or dog for that matter.) Not only is this a surprise to many pet parents, but the additional danger is that allium ingredients are often hidden in processed foods.

Allium species are toxic to cats because they can induce a form of anemia, where the cat destroys her own red blood cells. There can be a delay of several days from eating the onion- or garlic-containing food to showing signs such as:

Small quantities of allium are unlikely to be harmful. Give your cat a high protein (meat rich) diet and ensure he keeps drinking plenty of water. The biggest danger is the repeat offender who regularly eats onion-rich baby food or the cat who binges on onions. If this applies to your cat, see a vet immediately. Extreme cases may need a blood transfusion and oxygen therapy.

From cups of tea to coffee beans, as Hill's tell us, caffeine is a no-no for cats. The Pet Poison Helpline informs us that this stimulant produces signs including:

Your cat is unlikely to haunt Starbucks, but she could get access to caffeine through thrown out coffee grounds, cocoa mulch, tea bags, or energy drinks. While a cat should be OK after a couple of laps of tea, the same can't be said if she chews on cocoa mulch. If you suspect the cat has consumed caffeine, contact a vet as an emergency.

Delicious as chocolate is to people, this is another dangerous substance for cats. Chocolate contains theobromine, a chemical related to caffeine with stimulatory effects. Vets4Pets explain the symptoms are similar to those of caffeine toxicity, with the addition of a frequent need to urinate. A toxic dose of cooking chocolate is seven grams per kilogram body weight, so just 28 grams (about one ounce) of chocolate is dangerous for an average sized cat. Dark chocolate with a high cocoa solids content is the most toxic, with milk and white chocolates being less so. Urgent veterinary attention is essential. Contact the vet as an emergency, regardless of the time of day or night. 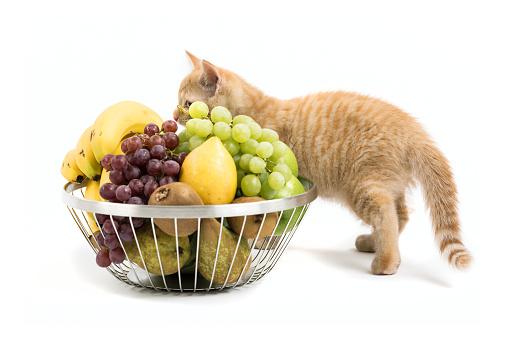 It's understandable that confectionery is harmful to cats, but it's harder to understand that some 'healthy' options for people are deadly to our fur-friends. VCA Hospitals describe how vine fruits are dangerous to dogs and also to cats. Precisely what causes the poisoning has yet to be identified, but it's now well recognized that vine fruits such as grapes and their dried relatives, raisins and currants, cause kidney failure in cats and dogs.

Frighteningly small quantities have the potential to send cats into kidney failure, so complete avoidance is advisable. If kitty does happen to snack on your lunchbox raisins, then contact the vet without delay. Prompt induction of vomiting (making her vomit) before the raisins are digested could save you a lot of heartache.

The ASPCA caution owners against the danger to pets who rifle through rubbish or eat moldy fruit. This is highlighted in dogs because of their tendency to scavenge, but the risk is the same for their fussier cousin, the cat. This risk is linked to certain molds that produce mycotoxins, which affect the nervous system. Symptoms of toxicity include:

If your pet shows these signs, keep her cool and immediately contact a vet.

Xylitol is an artificial sweetener used in a huge number of low-sugar human products from cookies and candies to mouthwashes. Unfortunately, as outlined by the Sunnyview Animal Center, xylitol has deadly consequences for cats. Xylitol stimulates a surge in insulin release, which sends the average cat's blood sugar level down into their paws. In a short space of time, the cat lapses into unconsciousness and a coma. Even with treatment, some cats that are resuscitated then go on to develop liver failure.

Complete avoidance of xylitol is essential for both cats and dogs. If you cat eats even a small amount, emergency veterinary treatment is essential. Signs of toxicity include:

If you shift the definition of 'toxic' to food with the potential to do harm, a whole new pantry opens up. Not all of these foods will kill and not all cats will have a problem with them. However, the following do have the potential to cause upset to a cat:

What to Do if Your Cat Eats an Unsafe Food 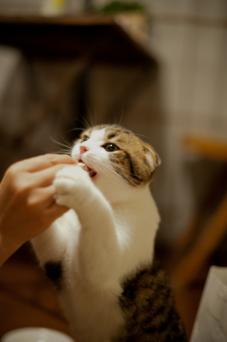 Keep the cat confined to one room, so that she doesn't disappear if a vet trip is required. Toxicity may depend on how much of the substance was eaten, so if it's part of a pack (such as a bar of chocolate) make a rough estimate of how much she ate. Then immediately phone the vet for advice.

In many cases, if the cat has only just eaten the food, making the cat vomit soon after eating the food reduces the risk of toxicity. Do not try to make the cat vomit yourself, unless told to do so by the vet.

If the cat ate the human food some hours ago, then there's no point to making her sick. Keep the cat under observation and be alert for any changes from her normal behavior or signs of illness. Give the vet a quick call to let them know what has happened. They can then advise you as to whether follow up blood tests are required to check for long term organ damage.

Prevention is better than cure. For example, there's a strong argument for keeping chocolate supplies under lock and key, purely in the interests of your cat's safety. Likewise, safeguard alcohol and eat those low-sugar cookies to stop the cat getting to them. Such selfless behavior could save your cat's life!