Catching feral cats and shy, homeless pet felines isn't the easiest task in the world, but it can be the most efficient way of gathering them up for altering or rehoming them. There are a number of humane traps available on the market, so the key to a successful mission is choosing the right trap for your particular situation.

Trying to decide which trap is the best can be a bit overwhelming when you begin looking at all your choices. The following traps represent the three basic styles you can use to humanely trap cats and remove them from your property.

A single-door trap is a perfectly good trap to use for cats that haven't been trapped before. You'll need to bait this trap with a small tin of wet cat food to lure the feline inside. Once the cat steps inside far enough to trigger the trip pan, the door automatically closes behind it, safely trapping the feline inside.

The double-door trap is an excellent choice for trap-shy cats. It is best placed next to walls, fences or hedges. Cats that have been trapped before are more likely to walk into this type of trap since they can see through it from one opening to the other, unlike a single door trap. 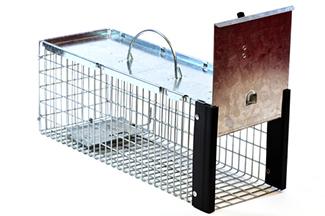 There is usually no need to bait this trap to attract a cat. Just place it in an area where you've typically seen the cat pass through. Both ends should ideally have some type of "funneling" that forces the cat to choose to walk through the trap rather than around it. This funneling can be sticks, potted plants, garbage cans, or any other item that makes walking through the trap seem like the easiest choice for the cat.

Drop traps are an option for semi-tame cats and kittens that don't necessarily run when people are around, but they won't let anyone get close enough to actually pick them up. A prop holds up one end of the trap, and a long string is attached to it. The bait is then placed beneath the trap. The person trying to catch the cat has to hang around and watch the animal go in. Once that happens, she has to pull the string to drop the trap and capture the feline.

Although this type of trap certainly works, it's a bit old-fashioned and there are two main drawbacks to using it. First, you have to hang around and actively catch the cat yourself rather than letting the trap do the work for you. Second, depending on the model of trap you have, you either need a compatible transfer cage or a pet carrier to put the cat in once she's trapped. In comparison, single and double-door traps can easily double as carriers, and this usually means less stress for the cats, especially if they don't want to be handled.

Do Your Part to Keep the Process Humane

Selecting a humane trap is only part of the job. You have to do your part to keep the feline safe once it's inside the trap. Plan on checking your traps hourly. A trapped cat has no option to relocate to a more comfortable spot, and prolonged exposure to extreme weather can lead to death. Once the cat is trapped, take it to the vet or animal shelter as soon as possible. Keeping the animal trapped longer than necessary will only cause more stress - something no cat needs right before being spayed, neutered or rehomed.