If you love felines but want something smaller as a pet, consider a "dwarf" cat. Although dwarf cats can occur in any breed due to a genetic mutation, there are varieties that are deliberately bred to retain the dwarf look of short legs and a small stature.

The Munchkin is a breed of dwarf cat that has the gene that results in very short legs (chondrodysplastic). It is the founding breed of a number of other breeds that have been developed with this characteristic. In order to produce the short-legged feature in other breeds and create new varieties, the Munchkin was out-crossed with a normally proportioned cat with the hopes that the kittens would have the small stature and short legs of the Munchkin as well as the desirable trait of the other parent's particular breed.

The Munchkin personality is outgoing and vivacious, and they love playing. They enjoy the company of humans and other pets in the household. 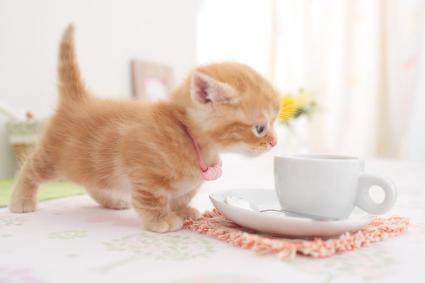 The Bambino is a cross between a Munchkin and a Sphynx. It has the short legs and small size that the Munchkins are known for, but it also is hairless like the Sphinx. Bambinos are known to be very affectionate and like other hairless cats, they enjoy getting in close to you for warmth. They do well with other pets and children and have are very active. 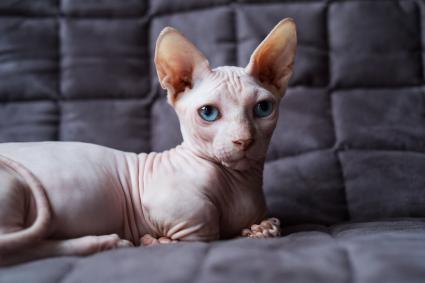 The Dwelf is a cross between a Munchkin, a Sphynx, and an American Curl although it looks most like Dobby the House Elf from the Harry Potter movies. It is a short-legged, hairless breed with curled ears. The Dwelf is also hypoallergenic. Like other Munchkin breeds, Dwelf cats have a reputation for extreme playfulness and they have been described as "dog-like." Since they need to be indoor cats, be prepared to prove a Dwelf with a lot of environmental and mental enrichment to keep them engaged.

The Genetta is a short-legged, dwarf cat that has the exotic coat of the African Genet, although there is no Genet in their breed DNA. It is a diminutive cat with a striped or marbled coat. Genettas are loving, friendly cats who enjoy play with humans, cats and dogs.

The Lambkin is a curly-furred, dwarf cat that comes from the outcrossing of a Munchkin and a Selkirk Rex. They are mildly vocal, very friendly and curious cats. They can be great lap cats however because they have a calmer side compared to other dwarf cat breeds.

The Minskin is a combination of Munchkin and Sphynx. It has short legs and a coat that is very sparse. It is a friendly breed that enjoys being held and played with. It is moderately active and enjoys playing just as much as snuggling in your lap.

The Napoleon or Minuet, is a cross between a Munchkin and a Persian. It has the short stature of a Munchkin, with a round face, round eyes and fluffy fur. Napoleon cats enjoy the company of others, whether it's people, cats or other pets. They do not do well alone for long periods of time. They have a moderate activity level and their temperament has a good balance between playful and relaxed. 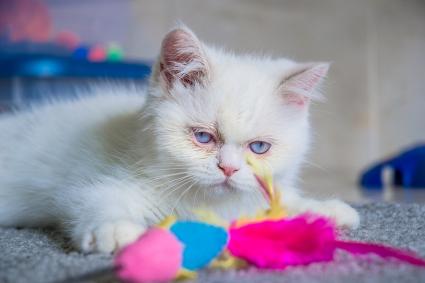 A Skookum is a cross between a Munchkin and a LaPerm. The Skookum is a dwarf cat with curly, soft fur. Despite their body composition, they are very athletic and active. They also retain the silly temperament that their LaPerm ancestors are known for. They are affectionate and intelligent and are a good companion to people and other pets.

Unlike the Munchkin based breeds, teacup breeds are correctly proportioned cats. Teacups just have a smaller size in every aspect. They tend to come from almost any breed and most do not have a separate breed standard. In terms of personality, they will mirror what is common for their specific breed. A typical teacup breed female will weigh only two to four pounds and is less than nine inches tall when fully grown.

The MiniPers is one of the few teacups to have a breed standard. The MiniPers is a Persian dwarf cat that has a Persian look; this includes the fluffy fur and flat face. The MiniPers does not have the short legs of the Munchkin type. It has the same proportions as a standard Persian should, just on a smaller scale. They also reflect the characteristics of the Persian personality. Due to their small size and fragility, they would best be reserved for homes with adults or older children.

If you have your heart set on a teacup cat, be sure to ask around and buy from a reliable breeder. There can be health problems associated with teacup breeds, including the following:

By purchasing your cat from a reputable breeder you can better protect yourself from these health issues.

Both Munchkins and teacups are controversial as some breeders and fancier associations consider deliberately breeding for this genetic mutation unethical. However, other cat professionals may feel that the cats don't compare negatively health-wise with "regular" cats.

Midget Cats Are a Lifelong Commitment

No matter whether you get a dwarf or teacup cat from a breeder or through a rescue, remember that a cat is a lifetime commitment. Give your cat plenty of affection and provide for all their needs, and you will be rewarded with loyalty and love.